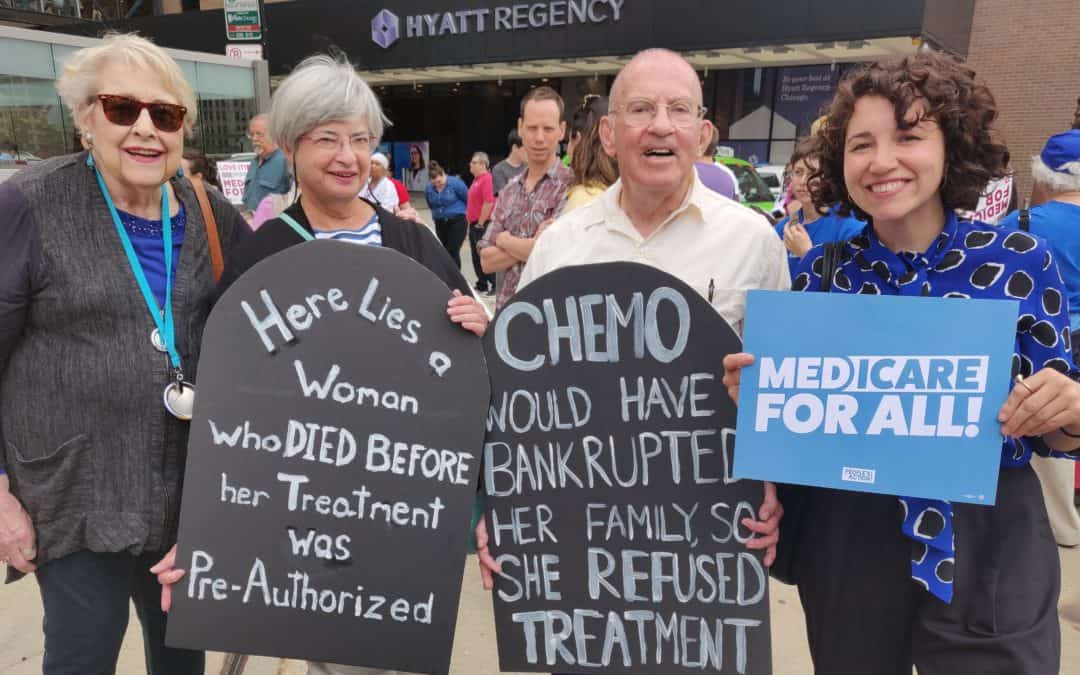 Achieving Medicare for All in the United States would mean replacing our current broken patchwork of a healthcare system with one where everyone could access comprehensive, equitable care whenever and wherever they need it.

The path to winning Medicare Care for All will be a case study of establishment forces doing all they can to detract, block and stave off progress.

With so many entities that profit immensely from our broken healthcare system, we will have to remove countless barriers along the way. The American Medical Association (AMA), a highly influential player in this debate, made a major move in August when it backed out of the Partnership for America’s Health Care Future (PAHCF), the lead industry group created to ensure Medicare for All does not become a reality.

As the movement toward Medicare for All gains steam, with presidential candidates Bernie Sanders and Elizabeth Warren touting the proposal on the campaign trail, the mounting threat to insurance companies and Big Pharma is becoming more and more clear. The end of private insurance, or at least most forms of it, stands as an existential threat to the future of these obscenely profitable corporations.

They should be scared. Close to a majority of Democrats in the U.S. House are now co-sponsoring Rep. Pramila Jayapal’s Medicare for All bill. Healthcare has become a dominant issue in the 2020 Democratic primary. Medicare is one of the most popular programs in American history, and at a time when good jobs with guaranteed healthcare are hard to find, it makes sense that Americans want to expand it.

The AMA has a long, troubling history of opposing healthcare reforms, including Medicare and Medicaid, which it called “socialized medicine” back in 1965. During the Obama administration, the AMA lobbied with private insurers to undermine the Affordable Care Act, significantly reducing the number of people able to get coverage under the law.

Currently, 30 million people in the United States are uninsured. Twenty-five million more are underinsured, meaning they spend 10% or more of their income on out-of-pocket medical expenses. Meanwhile, 70% of Americans now support Medicare for All, which, until this month, the AMA backed the PAHCF in inactively opposing.

The AMA’s decision to leave the PAHCF didn’t happen on its own, or overnight. Rather, it was the product of organizing.

In 2018, AMA members from Physicians for a National Health Program (PNHP), a pro-Medicare for All group, introduced a resolution at that year’s Annual Meeting of the AMA to end its decades-long opposition to single-payer healthcare. Those members have continued to organize, building a strong coalition of allies to support their call.

The national grassroots organization People’s Action, where I serve as the Health Care for All Campaign Director, has been a part of that fight. In April, roughly 1,000 of our members occupied the lobby of PAHCF’s Washington, D.C. office, demanding the group drop its opposition to Medicare for All.

People’s Action member organization Jane Addams Senior Caucus (JASC) then led an organizing effort which culminated in June when JASC and PNHP members took over the main floor of AMA’s national convention in Chicago, with seniors, doctors and other community members taking the stage and calling on the AMA to end its participation in the PAHCF as well as its opposition to Medicare for All. While the AMA leadership may have been opposed to our action, it was clear from the reception that many members at the convention supported us.

While we didn’t win, the result was close: 47% of delegates voted to adopt the resolution to stop opposing single-payer—the strongest show of support for universal healthcare in the AMA’s history.

More importantly, the PAHCF will no longer have the backing of the largest physician’s organization in this country, which is also the third-largest lobbying organization. Because of its decision to leave the group, the AMA will no longer financially contribute to the PAHCF’s Fox News-style propaganda campaign to kill Medicare for All.

Building support for Medicare for All is not hard. But beating back the wealthy forces determined to profit off of illness is.

The AMA’s decision to leave the PAHCF is the kind of incremental win we need on the path to winning universal healthcare. One by one, we will have to remove the barriers to expanding an incredibly popular and effective program. It won’t be easy. But in the end, we believe our movement for Medicare for All will prevail.

First published by In These Times. Republished with permission