Progressive Ideas Are Popular, They Win - Here’s How 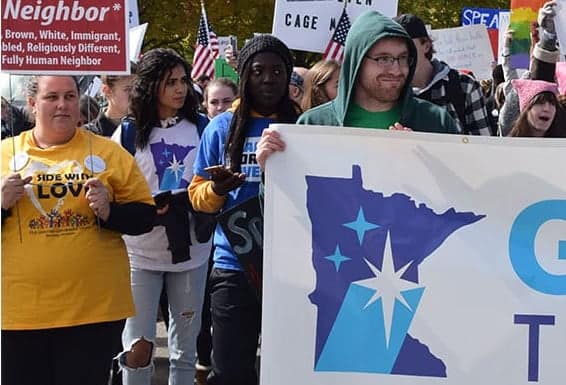 How do we build a bigger “we”? Anat Shenker-Osorio says we do this when we talk about race and class in a way that welcomes everybody in, and leaves nobody out. This “Race-Class Narrative Strategy,” which she and UC Berkeley law professor Ian Haney López developed in the early days of the Trump administration, has been broadly embraced by progressive movements, and has been key to coalition victories in places like Minnesota and Washington State, as well in the current campaign for Medicare For All. In Shenker-Osorio’s new podcast, Brave New Words, she walks us through these victories and explains how we can craft more effective campaigns together. She sat down with OurFuture’s Tim Wilkins to break it all down.

Q: How did the Race-Class Narrative Project start?

Like many of us, after the Trump election I looked around and saw that whatever it was we were doing, as hard as we were working, it either wasn't enough, or wasn't the right thing.

So (in early 2016) I did two day-long events, one in New York and one in Oakland, called “Messaging This Moment.” That’s where I met Ian Haney López. Ian had written a book, Dog Whistle Politics, and he had spent some time trying to convince folks in the progressive movement that we could indeed talk about race, and that doing so would actually prove more effective and persuasive - even with whites, as well as more mobilizing for voters of color – than not talking about race.  So a message that is more persuasive to the middle, and more galvanizing to the base.

Ian was determined there could be a message that fused together the ideas of race and class in a way that would outperform a race-only or a class-only message. But when he tried to convince Democrats and progressive movers and shakers this was a good idea, people were understandably loathe to believe it would actually work, without any empirical testing,.

So the Race-Class Narrative Project was really a year-long exploration into how people actually perceive race, and how do they articulate it? How does that alter or affect their political beliefs, both in terms of the people they want to vote for, and equally importantly, whether or not they actually want to vote?

We did a national research project, then a deeper dive in four states - Indiana, Ohio, Minnesota and California. We had the work independently verified at least seven separate times, including through an incredibly robust and super-exciting field experiment with People's Action.

Q: What did you discover in this research?

We found that one of the through-lines of messages that do work, versus those that don't, is you have to say what you’re for - not what you’re against. Because what you fight, you feed. The more you belabor the size, strength, ubiquity and deviousness of your opposition, the more you just reinforce in your would-be actors the feeling of, “Why should I get up off the couch? You just told me that it's hopeless, it’s never been worse, it's getting worse every moment - but I should vote?” You know, that solution doesn't feel commensurate to the problem.

So what the Race-Class Narrative really does is combine the standard Democratic approach that says, “We need to return bread-and-butter issues like wages, work conditions and health care!” with a recognition that politics is not solitaire.

We don't have the luxury of people only sharing what we say. Our opposition is never going to shut up, so when you actually do an exploration, as Ian has done, of what the right-wing story is, you quickly recognize that at least since Nixon and his famed “southern strategy,” and really since the founding of this country, dog whistle politics has been a mainstay.

By “dog whistle” I mean the use of racially coded speech in order to stir up resentment, hatred, enmity, and distrust of people of color, in order to undermine government. That's really the core of it.

The effect of these dog whistles, whether an OG dog-whistle like “inner-city crime” or “welfare queen,” or a newer one like “illegal immigrants” or “Sharia law,” is to undermine the sense that there can ever be an “us.”

So whites are taught racial resentment through this kind of coded speech, which grants speakers some measure of plausible deniability. And once you understand how that works, you recognize that in order to have a progressive message, you have to have an affirmation of what we stand for that is decidedly and loudly multiracial, and you have to act as a rebuttal to the rest of what people are hearing.

Organizers across states were telling us, “When I go to the doors and try to talk about lowering health care costs, making college more affordable, or raising wages, the person at the door says, ‘Well, but you know, immigrants are taking our jobs, Muslims are coming and they’re terrorizing our communities.’” And so if you're not acting as a rebuttal to that kind of dominant narrative, whatever you're trying to say is not going to get through.

Q: One of the fascinating things you’ve come up with is that this rebuttal does not need to be ‘No.’ You can paint the picture paint the picture of a brighter, more inclusive future. Can you describe how we can do that in practice?

A: I would argue that it most assuredly cannot be ‘No.’ The progressive movement is full of negative directives - things like, “End this,” “Stop that” or “Abolish” something else. They are our default setting, and I agree with all of those directives. But when we test them against an affirmation, there's no contest. When we say what we are for, we are both more persuasive, and we sustain the interest and the action of our base.

Q: Walk us through how the Race-Class Narrative works.

A: Every Race-Class message, whether it's about housing or policing or immigrant rights or childcare, follows a specific order. The beauty of this narrative is that it can be applied to whatever it is you need to talk about at that moment.

So the first thing is to explicitly name race inside of a shared value that includes everyone. What that sounds like might be “Whether we’re white, black or brown, most of us believe that people who work for a living ought to earn a living.” Or “Whatever we look like, and wherever we come from, most of us want to treat others the way we want to be treated.” So there’s a shared value, and you name race – that’s step one.

Step two is to name the problem. This is one of the ways this differs from a standard progressive message. Standard progressive messages like to begin, “Boy, have I got a problem for you!” But it turns out people already have 99 problems; they're not really shopping for ours. So when we begin our messages that way, they're not that enticing to people.

So we talk about deliberate division to aid and abet plutocracy. What this sounds like is, “Today, a wealthy few and the politicians they pay for divide us against each other based on what we look like or where we come from, so they can continue to reap the spoils our work creates.”

Or you do a slightly more pointed version, which is scapegoating: “Today, a handful of corporations and politicians they've lobbied shame and blame black people, new immigrants, and people struggling to make ends meet, hoping we'll look the other way while they gut the basic services every one of us needs.”

Then the third step of every winning Race-Class Narrative message is an explicit call for cross-racial unity to overcome this deliberate division, which is in service of letting rich people get away with what they get away with.  This would sound like, “By joining together across racial differences, we can make this is a place where freedom is for everyone, no exceptions.”

So that’s basically the three steps, with some examples of what they can sound like.

Q: One of the exciting things about this approach is it's not just a strategy, it’s something you can put into practice to win - and it does win. And in your new podcast, Brave New Words, you walk us through some real campaigns you were involved with, and where there were real victories using this approach.

A: One of our core problems, not just in the U.S., is this constant feeling, like, we say progressive ideas are popular. We say they enjoy majority support in most spots. The polls say that is true, but it doesn't feel like we are winning. And when we present ourselves by saying, “We’re the losing team. We lose a lot, we lost recently, so you should join us.” That's not really a compelling pitch. So with the podcast, I wanted something out there that says, “Progressive ideas are popular, they win - here’s how.”