What It Takes To Win Medicare For All In Every Community 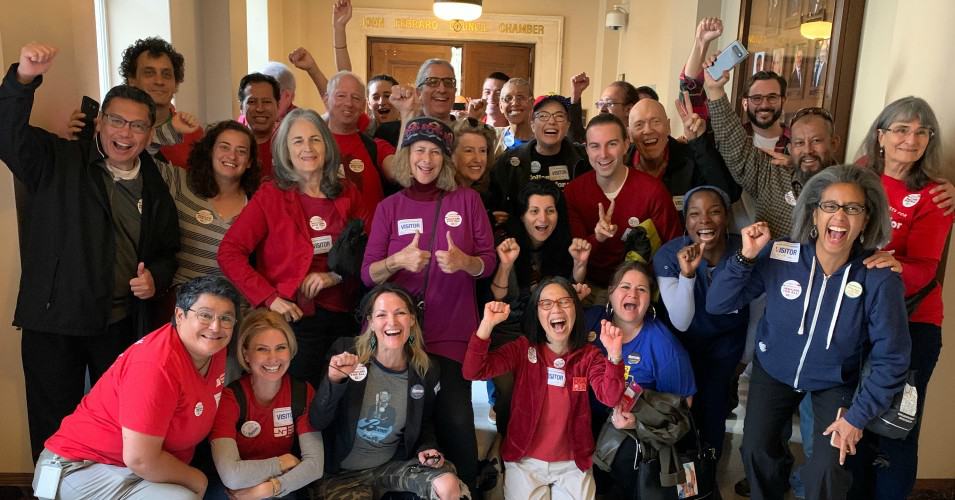 On Tuesday, November 5th, the Los Angeles City Council voted ten to one in favor of a resolution in support of H.R. 1384, the Medicare for All Act of 2019. Los Angeles is now the largest city in the United States to do so, joining Tampa, Detroit, Seattle, Chicago’s Cook County in this growing movement.

This was an opportunity for the Los Angeles Council to state what it values, and for our city to say how it wants to be governed. It said we all deserve to get the healthcare we need, when we need it, regardless of our financial means. If we make sure that those in need of help can get the help they need, we are all stronger.

Getting the resolution passed was the culmination of months of advocacy. We were grateful to be present for the vote, and to be joined by our fellow activists on that early morning. If there was anything more we would have wished for, it was that more of the people we had met in the course of organizing for the resolution could have been there with us. Because it was their stories that cemented our resolve to put in the work and keep going. 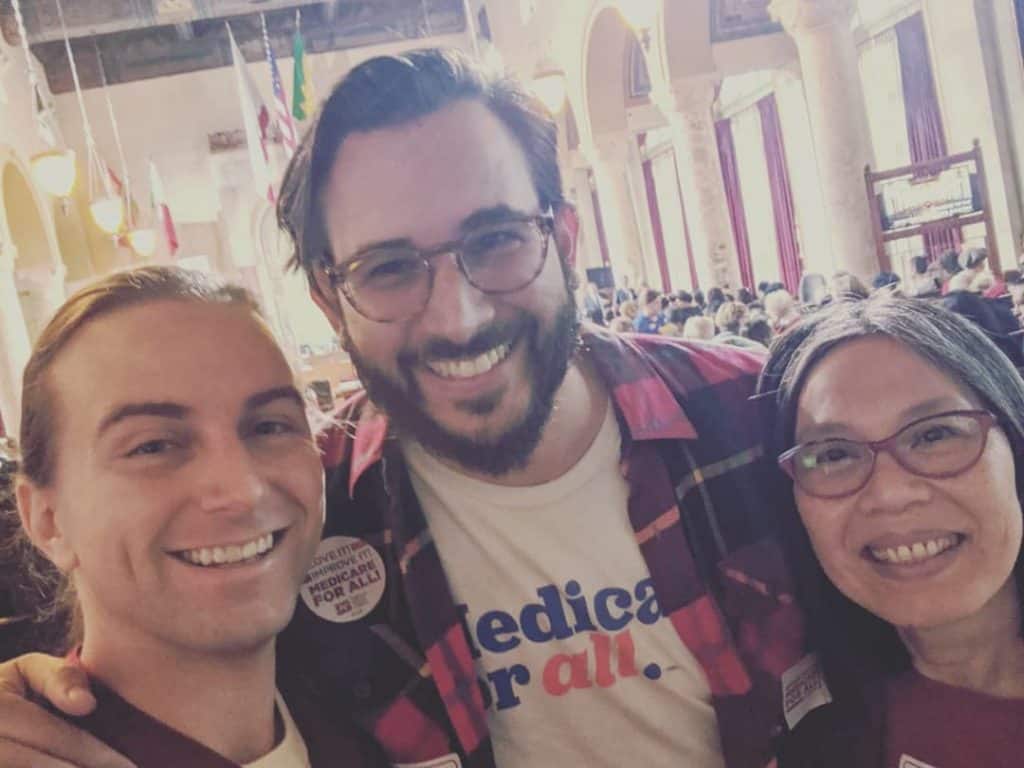 Our original band of volunteer organizers came together over the past year when we became directly involved in the campaign for Medicare for All. Each of us had our own reasons: for Sasha it was understanding this is one of the greatest justice issues of our time. For Sean, it was in response to his sister getting a cancer diagnosis while uninsured.

For Cheng-Sim, it was surviving cancer and organizing for passage of the Affordable Care Act, then realizing after the ACA passed how inadequate a reform it was. For Craig, it was years of living with HIV/AIDS, and how a chronic disease limited his ability to make changes in his life due to limited insurance options and costs. Three of us connected through the organizing of National Nurses United, and Craig got involved through the Democratic Socialists of America.

We started out separately - canvassing our neighborhoods, tabling at farmers’ markets, and knocking door-to-door. We joined rallies with hundreds of people, and held intimate meetings in homes and libraries. Our paths united when we met, along with about 20 fellow progressives, at Cheng-Sim’s home for a series of teach-ins on the specifics of H.R. 1384 and S. 1129, and to strategize what we could do in Los Angeles to help advance these bills.

At this point, we had aligned ourselves with the Medicare for All Resolutions Campaign led by Public Citizen. We went back and forth on whether to approach the City, or County, of Los Angeles.

We immediately started reaching out to Neighborhood Councils to see who would be interested in a presentation. Out of Los Angeles’ 99 NCs, we prioritized ones in which our activists were stakeholders.

It was slow at first. A few responded saying they were interested, but not comfortable crafting a letter asking the City Council to take action. But it only takes one match to start a fire, and one Neighborhood Council told us the magic words that could light the match.

“Get a Council File.”

A Council File is an official record of motions in City Hall that different departments and constituents can interact with, adding their input while the motion goes through the process of passage. This NC told us that if we could get a Council File going, they would be interested.

That gave us our first goal. 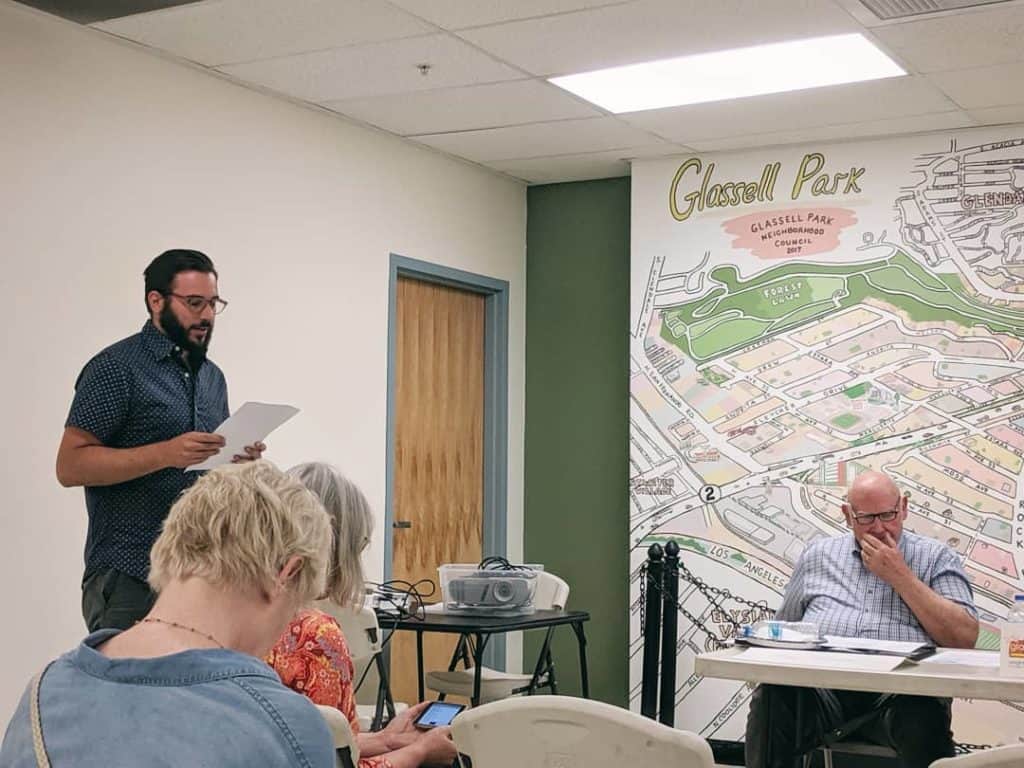 Within a month, eight more NCs followed. People at City Hall were starting to take notice. Advocates met with Los Angeles City Councilmembers to ask them to introduce a resolution, citing the support within the community that was visible not only at Neighborhood Councils but also from a block-walking campaign that resulted in Congressman Brad Sherman co-sponsoring the House bill. We continued reaching out to more Neighborhood Councils, sharing the stories we had heard and showing the support we had garnered from the NCs to our City Councilmembers.

In August, City Council President Herb Wesson introduced a motion to put Los Angeles on record in support of H.R. 1384. He was joined by six other members of the City Council. The motion gave us the Council File we needed. We could now return to the Neighborhood Councils and ask them to do something that could be more impactful: submit Community Impact Statements in support of the Council File.

Throughout the next phase of our advocacy, we were able to talk to new Neighborhood Councils and hear from people across the city. We heard from an NC Board member whose parents had never had insurance until they turned 65 and could get Medicare.

Another told us about the experience of seeing her grandmother beat cancer while on Medicare, but then watching her own mother die from the same kind of cancer because she was uninsured and only diagnosed in the latest stage. Still another spoke about having a very good, union-negotiated plan but that having this coverage didn’t make them feel good when they considered others who are locked out of health insurance.

What we learned from the stories we heard is this: you don’t have to cast a wide net to find someone in your city, your neighborhood, or your family who has been forced to deal with the injustices of our current health insurance system. What we have is a system that doesn't concern itself with our health but its own profit.

So many of us are unable to get the most basic healthcare. Too many of us have to make the choice between seeing a doctor or paying rent. A trip to the emergency room could be what forces us to the streets. Our children have to worry not about getting hurt but how much the injury will cost their parents. Our mothers or fathers, sisters or brothers forgo treatment and prevention out of justified worry that it will bankrupt the family.

These honest, deeply personal conversations at the Neighborhood Council meetings led to the NCs becoming our strongest allies in advocating for Medicare for All to the City Council.

By the time the City Council voted on November 5th, 18 Neighborhood Councils had approved resolutions urging the City Council to act and ten had submitted Community Impact Statements. Our small group of Medicare for All activists had also grown bigger. We were incredibly fortunate to join in with people like Mari Lopez, Maureen Cruise, Betty Doumas, Erika Feresten, and Dr. Bill Honigman who have been fighting for universal, single-payer healthcare for years.

Experience has taught us that to win for Medicare for All, we need to educate people about single-payer, universal healthcare. And then listen, learn and repeat. Find ways for others to become involved. Plan regular actions, and review what is working and what is not effective. 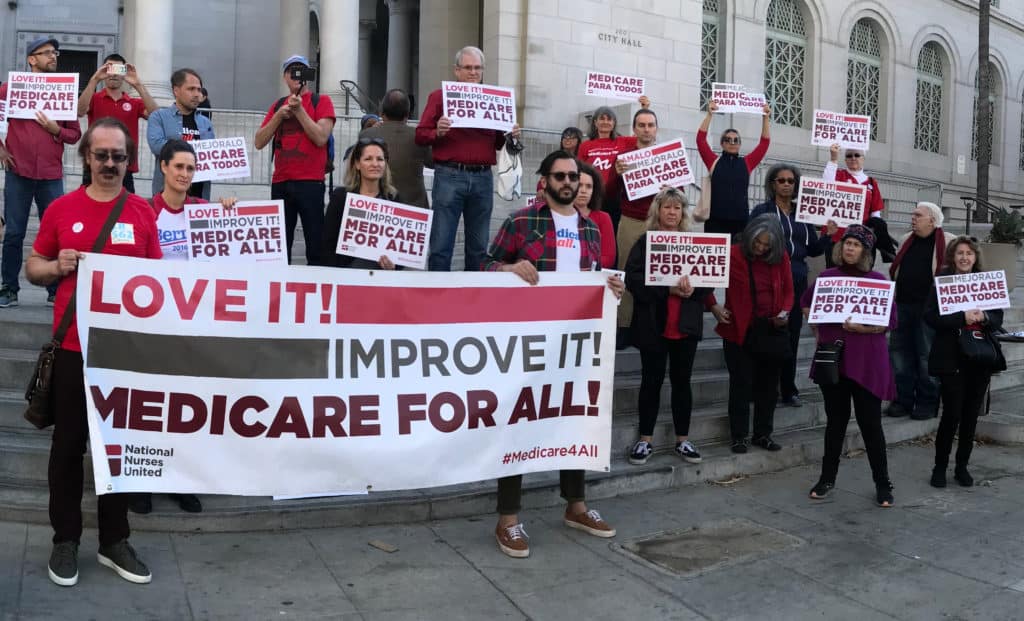 Grassroots organizing works. Community outreach works. Listening and sharing stories works. Get to know who your elected officials are at any level of government. It seems basic, but make it to a City Council or Neighborhood Council meeting. Find out how they work and find a way to get involved. Most importantly, don’t do it alone. You’ll appreciate the support and camaraderie.

What we’ve learned most of all is that healthcare touches every one of us, and sharing our collective stories can catalyze action in response.

The City of Los Angeles heard our stories, and responded. The City now stands with us on the side of health justice. To those Senators and Representatives yet to join the fight for Medicare for All, hear us too.

Sean Broadbent is a video editor living in Los Angeles and is the son of U.S. Air Force nurses. Sasha Rappaport is a Lead Organizer for Los Angeles Forward and lives in Highland Park with his wife, 2 boys, and their dog. Cheng-Sim Lim is a film curator and longtime resident of Los Feliz.