How You Can Make 2020 The Year The People Win 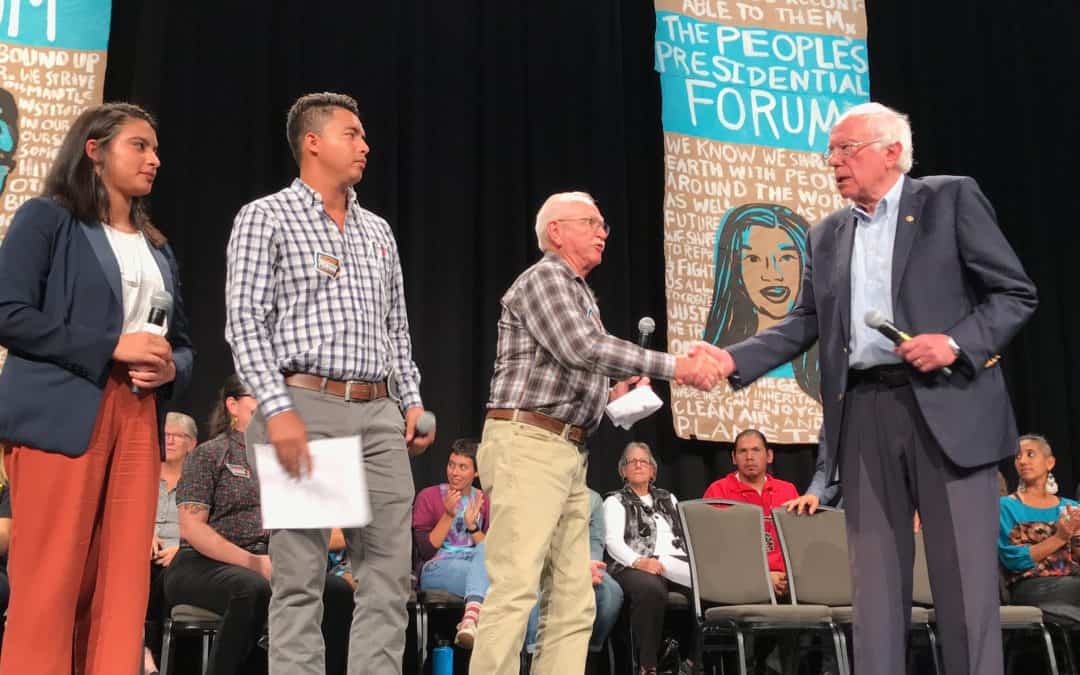 At People’s Action, we believe in the power of extraordinary everyday people. We also believe this power belongs in government - including in the highest office of the land.

That’s why our movement politics program elevates the voices of the multi-racial working class, so we rise above the barriers of concentrated wealth and racism that seek to silence us in society.

Elections are the greatest public conversation in the United States over who we are as a nation, what we value, what we will discard and on whose behalf we will govern and be governed. For decades, many community organizations, including ours, didn’t weigh in. Instead we played on a field set by others, pushing those in power to respond to our demands.

We won important victories in many communities, but as corporations and an increasingly emboldened racist right-wing have consolidated their grip on governing power, the lives of many working people have gotten worse. So we decided enough is enough.

We don’t want to beg those in power for crumbs. We don’t want a seat at a table where we’re expected to keep quiet. We want our values to have a voice. And we want real people to run the table.

That’s why we launched our co-governing strategy - to elect grassroots leaders to public office. And at this time of extreme crisis and opportunity in America, it’s working. Three years on, more than 150 members and leaders from People’s Action organizations have now run for and been elected to public office.

Starting from the grassroots, we’ve elected people’s champions in places like Colorado, were Crystal Murillo from Colorado People’s Action is now a city councilperson in Aurora, and in Illinois, where Andre Vasquez from The People’s Lobby/Reclaim Chicago is an Alderman. We’ve also elected state legislators like Heidi Brooks from Maine People’s Action, and Mandela Barnes, a co-op member of Wisconsin Citizen Action, as the Badger State’s Lieutenant Governor.

After victories like these in the 2018 midterm elections, we were ready to take the next step. So our Delegates’ Assembly - the internal democratic body in which each of our 47 member organizations in 38 states is represented by two members - decided to launch a People’s Presidential Campaign.

Our goal in taking this step was the same we had at the grassroots: to put the values and lives of multi-racial working people first, in a platform that would embody our commitment to people and planet, and then engage politicians around what matters most to our members.

Our People’s Platform and this movement politics strategy didn’t come out of nowhere. Over a decade, People’s Action and our member groups worked together to create a Long-Term Agenda for A People’s Economy. 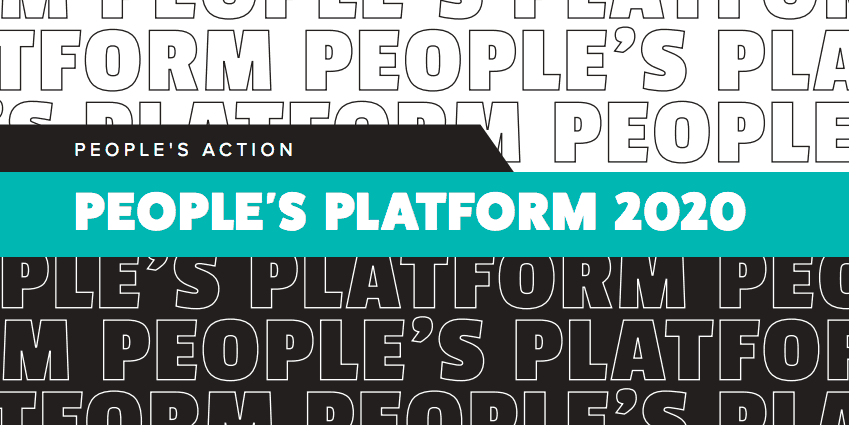 This long-term agenda has been been effective in naming the hard truths of our current conditions, thinking big about what is possible, and the shifts we need to make in our thinking and our doing to create the power needed to achieve a dramatically different and more hopeful world than the one we live in now.

It’s not simply about advancing one issue or one election: it’s about building power in multiple arenas to open space for a kind of change that is often hard to imagine within the dominant context we live in. While this shift is much bigger than us, we have played an important role in changing the way people feel and talk about what is possible.

People’s Action’s pushes for a National Homes Guarantee and Free College for All (Student Action’s flagship campaign) are examples of our being at the leading edge of moving a structural transformation idea into the public conversation. These ideas, which only months ago were nearly unthinkable, are now embraced by multiple presidential candidates and discussed on the national stage.

We are early in this process, but it speaks to the ways we can shape the debate around a big issue and our shared sense of what is possible. The fact that this process, much like the creation of our long-term agenda, is so grounded in our members and their experience is something we want to remember and repeat.

We invested first and foremost in building inside of our member groups. Ten years ago, National People’s Action had around 15 affiliates, of which none could endorse candidates for public office. Today we have 47 member groups in 38 states, more than 90 percent of which have a sister organization that is able to engage in politics.

The core components of this approach are 1) winning the battle of big ideas, 2) building the power to co-govern, and 3) winning things that improve people’s material conditions and advance structural reforms that move power to everyday people.

So we asked every group in our network - thousands of our members - to help us build a compass that points toward the sort of world we want to live in, rather than solely focus on the most immediate win to improve people’s lives in each community. That’s how, with our member organizations and their rank-and-file members, we built our People’s Platform.

This platform takes big ideas - like “Making Corporations Responsive to the Needs of the Working Class” - and breaks them down into a clear-eyed analysis of the problem and actionable steps to advance the solution, such as worker and community representation on corporate boards or forced dissolution of corporations guilty of major violations of worker, community and environmental standards.

Step #2: Test The Platform With Candidates

We’ve since sent our People’s Platform, and a written questionnaire based on it to most of this cycle’s major candidates for President. Mayor Pete Buttigieg, Secretary Julián Castro, Senator Kamala Harris (D-CA), Senator Bernie Sanders (I-VT) and Senator Elizabeth Warren (D-MA) all responded and have turned in completed questionnaires. We’ll post their completed responses online soon for you to review, so you can judge for yourself who’s the real people’s champion. 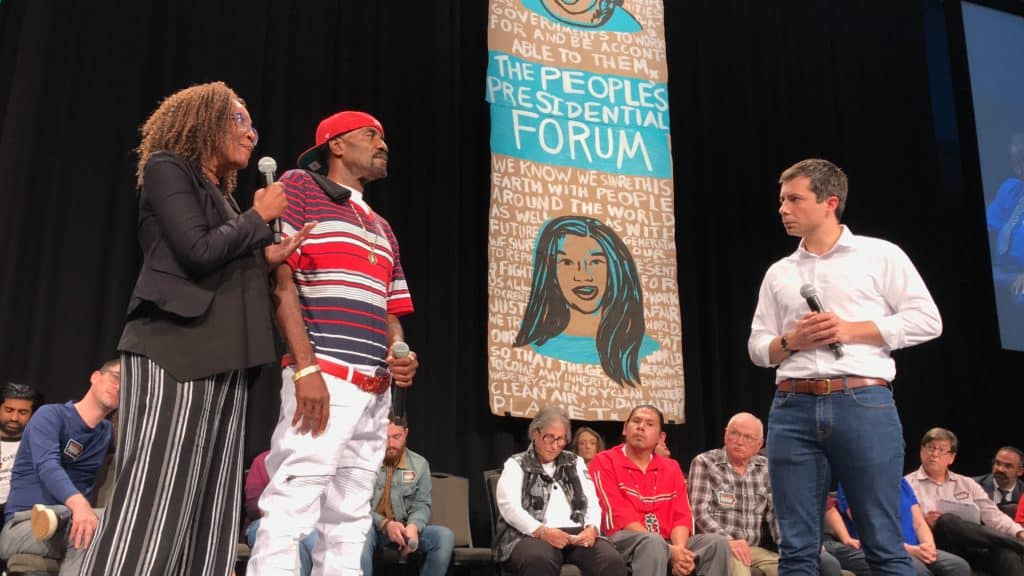 We ask the candidates specific and hard policy questions about environmental “sacrifice zones,” where Black, brown and poor residents are poisoned in their homes, Free College for All, a National Homes Guarantee and more. But we also ask questions about candidates’ life experiences and mindset, which includes asking about a time they felt powerless, and what they learned from that experience.

Here’s one example from our questionnaire:

Will you create a process to consult with grassroots movement organizations, labor, and public interest groups regarding hiring staff and making appointments to governmental commissions and other bodies that your office has authority over so that they can provide input and recommend candidates, and then inform them of whom you have hired and why?

We appreciate the candidates’ responses, and the participation of Warren, Castro, Buttegieg and Sanders at our first People’s Forum in Des Moines, Iowa on September 21. Missed it? you can watch the live replay here. In Des Moines, candidates met with real people from among the 2,500 People’s Action members from across Iowa and the Midwest gathered for the event, and listened to their real life experiences.

That’s the People’s Action difference: real people, real experiences, and a real seat at the table. Our forums are truly a #NoStumpZone, where candidates hear stories and are asked hard questions by the extraordinary everyday people of the multi-racial working class, not by celebrity moderators.

Our next People’s Forum will be this Saturday, October 26th from noon to 4 p.m. PST in Las Vegas, hosted by PLAN Action of Nevada at the East Las Vegas Community Center. Tickets are free, or you can watch the livestream and join the conversation at CrowdCast.

Will you join us at our next People's Forum to help make 2020 the year the people win? We hope so!