Is Speaking Up For Medicare For All A Crime? 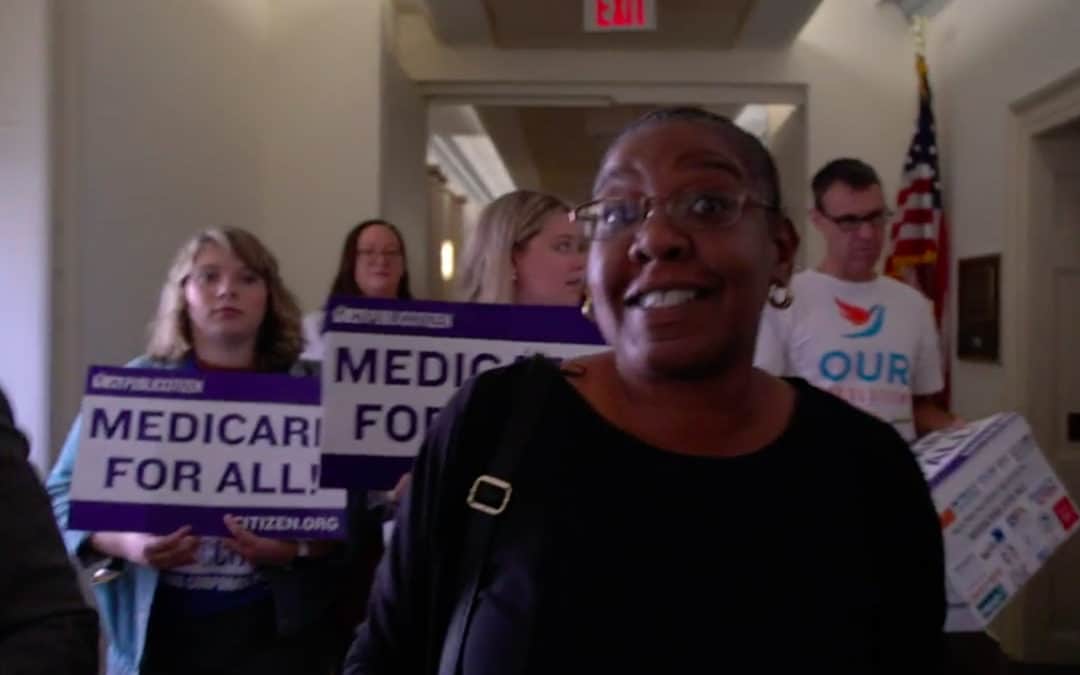 As a longtime D.C.-area advocate, I’ve visited Capitol Hill and Members of Congress many times. But never before have I felt I might face arrest for exercising my constitutional rights!

Capitol Police are actively stopping us from delivering #MedicareForAll petitions to our elected representatives.

On Tuesday, I was on Capitol Hill with People’s Action and our coalition partners to deliver 2.2 million signatures to 13 Representatives, asking them to co-sponsor H.R. 1384 and pass Medicare For All. These members, who include Reps. Darren Soto (D-N.J.), Mary Gay Scanlon (D-Pa.), and Dave Loebsack (D-Iowa), have not yet endorsed this bill, which was introduced in the House by Rep. Pramila Jayapal (D-Was.) in February.

We came to the Hill with three-ring binders of signatures, and our conviction that Medicare For All is the best solution to our nation’s health care crisis right now. We were cleared through security by Capitol police, then started to make our way through the halls of the Longworth Office Building to deliver copies of the petition.

Our delegation included constituents from members’ districts, and representatives of groups that helped gather the signatures, including Public Citizen, Physicians for a National Health Care Program, LULAC, Social Security Works and Our Revolution.

We were also joined by Kaitlin, Andrea and baby Danni - three family members of Danny Crespo, an activist from the Maryland Progressive Healthcare Coalition who walked these same halls in support of Medicare for All when the bill was first released.

Danny was a father of three, and lived with diabetes. A few years ago, he fell into a diabetic coma, and went from a six-figure salary in New York to earning minimum wage in Maryland as he got increasingly sick. The weight of his medical debt and mounting expenses crushed him, and Danny took his own life in June.

Like so many Americans, Danny felt trapped by the cost of health care, and worried he had become a financial burden to his family. When he reached out to therapists for support, he couldn’t afford their copays, so he went without the mental health care that might have saved his life. His children are now without him. And the health industry continues to conduct business as usual.

Holding a box of the bills that had weighed so heavily on Danny, Kaitlin was with us when we met Rep. Jayapal. She tearfully shared Danny’s story. Rep. Jayapal thanked her for sharing Danny’s experience to help others, and asked to give her a hug.

It was a proud moment for me to stand with Kaitlin, Andrea and Danni. Hopefully, I told myself, if we can share more stories like Danny’s with Members of Congress, they will realize why we need solutions to our health care crisis now - not later.

Other Members of Congress, too, gave us a warm welcome, including Rep. Debbie Dingell (D-Mich.), who co-authored the Medicare for All bill with Rep Jayapal.

“Every American in this country deserves quality, affordable health care - period,” said Rep. Dingell. She had just returned from Michigan, where she attended a funeral of a constituent who died because she couldn’t afford health care.

“Pramila and I, we’re traveling the country, and we’ve got to tell the facts - we’re the only industrialized nation in the world that doesn’t guarantee every one of its citizens health care, and our health care costs are double what any other country’s are, and our outcomes are worse. That’s why we’re here.”

We were welcomed into the offices of multiple members, including Reps. Soto and Scanlon, where staffers listened attentively to our stories and promised to deliver the petition.

But something odd happened when we got to the office of Rep. Loebsack. Upon entering his office, our group was stopped by Capitol police.

“You can’t be dropping things off, it goes against building regulations,” said one officer. “If you’re handing something to someone, that’s a deliverable - and they’re not allowed in the building.”

Before I knew it, I felt boxed in by this very tall police officer and then surrounded by another officer who had pushed through the crowd. I can’t say for sure why I felt nervous. It might have been natural instincts - the fear of getting escorted off the premises - or the fact that on my way to the Hill, I had been listening to news reports about the shooting by Fort Worth police of an unarmed African-American woman, Atatiana Jefferson, in her home. Either way, it was intimidating.

I and other members of our group have delivered petitions on Capitol Hill countless times, and this has never happened. Why they chose to stop the group at Rep. Loebsack’s office is still baffling to me. But I held my ground, and was able to deliver the petitions and very short remarks to congressman Loebsack’s staffer. We preserved and completed our mission of delivering all 2.2 million signatures.

The group wrapped with final remarks from Alex Lawson, executive director of Social Security Works and I then joined the co-chairs of Maryland Progressive Healthcare Coalition to make a last stop at the office of Congressman David Trone, from my home district in Maryland. Once again, Kaitlin and Andrea were given an opportunity to share Danny’s story with the congressman’s communications director and scheduler.

I could tell these staffers were both quite moved. While we didn’t get to deliver this message to Rep. Trone in person, I truly hope he will join the Maryland Progressive Healthcare Coalition at their upcoming town hall in Gaithersburg, MD, which is in his district.

We will be there with Rep. Trone's constituents, and I hope he will, too!

Joy Blackwood is D.C. Strategy Director for People's Action, and a board member of Physicians for Social Responsibility.