What A Homes Guarantee Means To Me 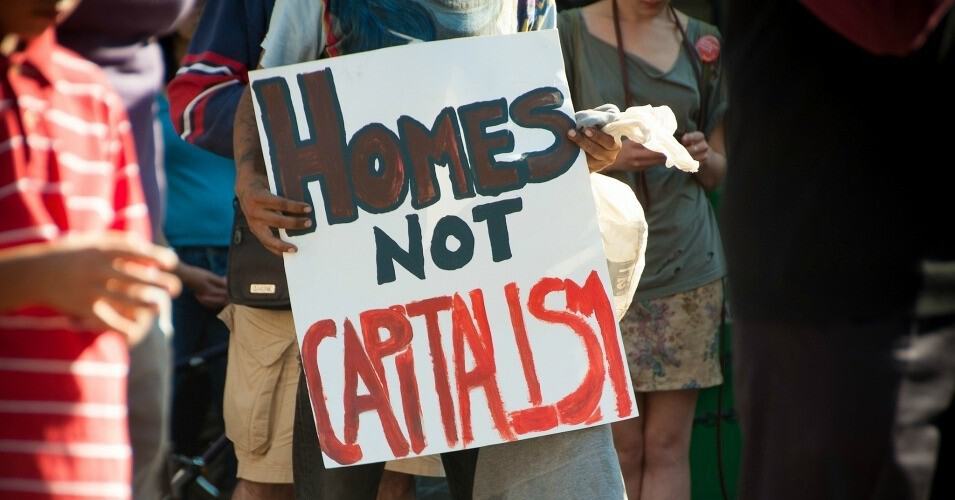 I lost everything during the financial crisis. The government decided that the perpetrators of the crisis were “too big to fail” and bailed them out with our money. I was not bailed out.

Today, a decade after the crisis, I’m part of a grassroots-led effort to ensure every person in the United States has safe, accessible, sustainable, and permanently affordable housing. I don’t want anyone to have to go through what I’ve gone through.

After the crash, I had to change my whole life. I didn’t have a 401(k) retirement account to fall back on. I had to cancel travel plans. I had to find a place to live.

I moved into a building owned by a non-profit, but just six months later I learned that it was for sale to the highest for-profit bidder. My neighbors, 120 people aged 65 to 92, were traumatized by the threat of homelessness. I had visions of ending up on the street with my cat. Fortunately, we were able to organize and save our homes.

But now we struggle with our new landlord, the Chicago Housing Authority. In our city, seniors in public housing use ovens to stay warm in winter and ride on out-of-code elevators. Others are wait-listed for years before they can get an apartment.

My friend Stephanie died because of conditions in senior housing last year. She always used to say, "This is war, Linda. This is war."

My story is not isolated or extreme, but rather very typical of America’s systemic housing emergency. In 2019, a full-time worker earning the minimum wage cannot afford a two-bedroom apartment in any county ⁠— urban, suburban, or rural—in the United States. Twenty-one million households, disproportionately people of color, spend over 30 percent of their income on housing.

Land will be stewarded by and on behalf of everyday people like me instead of developers and landlords out to make the biggest profit.

Only one in five households that qualify for federal housing assistance receives it. America has betrayed public housing communities through decades of racist disinvestment and neglect. Too often, residents face a brutal choice between appalling conditions or rehousing promises that are insufficient—less affordable, far away—or simply never materialize. Millions live one medical bill, flat tire, or other life event away from homelessness.

My story, Stephanie’s story, the stories of my neighbors, and the scale of the national crisis are why I’m a proud leader with the campaign for a national Homes Guarantee. Over the past two years, we’ve determined that we, the people closest to the problems, had to envision our own solutions.

Our vision for a Homes Guarantee is simple: in the wealthiest country in world’s history, we can and we must guarantee that everyone has a home.

The Homes Guarantee calls for building 12 million social housing units and reinvestment in existing crumbling public housing. We also need stronger protections for renters, as well as tenants and former homeowners living in recently or about to be foreclosed homes.

Our vision would also address the need for reparations for centuries of racist housing policies, like redlining and other forms of discrimination. To help our country address the climate crisis, we also call for energy efficiency investments that would slash carbon emissions.

Fully realized, our proposal will guarantee homes for all. Rents will be set based on our needs and real costs to local government, rather than speculative market prices. Land will be stewarded by and on behalf of everyday people like me instead of developers and landlords out to make the biggest profit.

Our vision for a Homes Guarantee is radical. It is also necessary.

I can’t wait anymore—and neither can my neighbors.

Linda Armitage is a board member and grassroots leader with Jane Addams Senior Caucus in Chicago. She is on the grassroots team for the campaign for a national Homes Guarantee, a project of People's Action.