Real People Will Lead the Way to #MedicareForAll 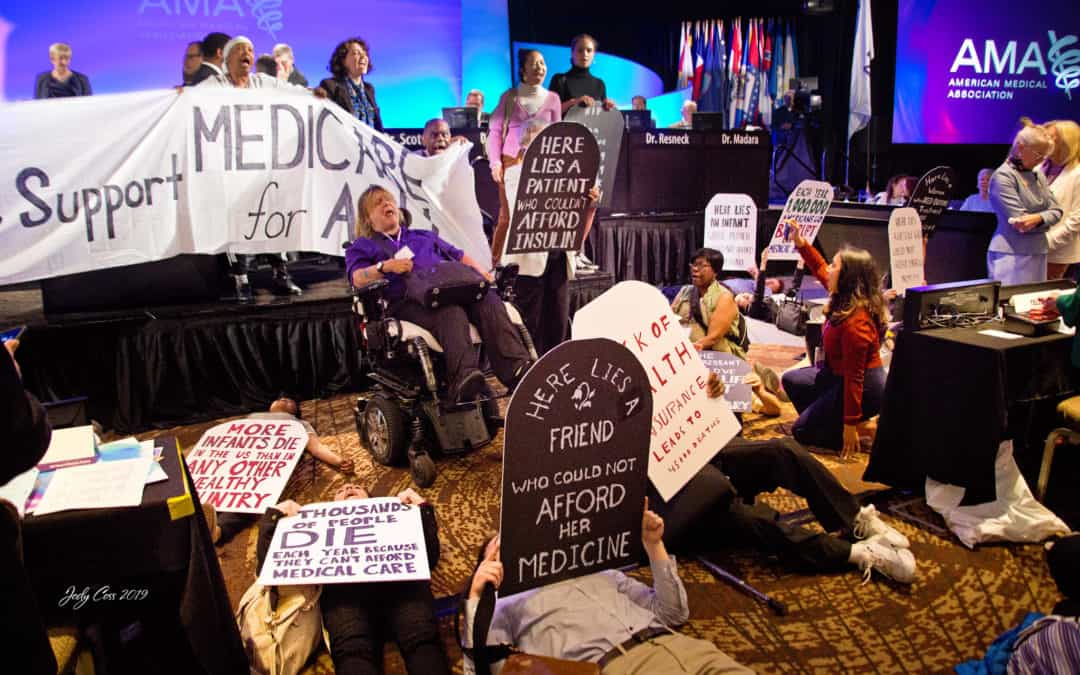 Seniors chanting “Get out of the way!” as they hold cardboard tombstones might not seem like a challenge to the largest physicians’ group in the United States. But in 78-year-old Reggie Griffin, the American Medical Association met their match.

“The time is up for us to sit on the sidelines and complain about things,” says Reggie, a retired graphic designer who helped take over the floor of the AMA’s annual convention this June in Chicago. “I have two grown daughters, five grown grandkids, and five young great-grandkids. We’ve got to fight for them now, to preserve and improve what we have for the future.”

Reggie helped lead this “die-in” that pressured the AMA to drop out of the Partnership for America’s Health Care Future, a lobby founded last year by private insurers, hospitals and pharmaceutical makers. The Partnership has spent hundreds of millions so far to stop the expansion of health care coverage.

Reggie and other members of Jane Addams Senior Caucus, a senior-led member-driven organizing and advocacy affiliate of People’s Action, joined over a dozen groups and about 400 people at the AMA’s annual convention to demand they leave the Partnership. And it worked.

Decades of education and direct action brought these activists to rally inside and outside the Hyatt Regency to make sure the AMA heard how the current system puts profits over patients’ well-being. Caregivers and the chronically ill gave testimony to how insurers and ballooning health care costs kept them and their loved ones from accessing needed care.

“In our group there were doctors and medical students, but most were seniors like me – some in wheelchairs – each of whom has their own painful experiences to share of being denied care when we needed it most,” says Reggie.

The importance of this win cannot be overstated. The AMA has a long history of opposing health care reforms, including Medicare and Medicaid, which they decried as “socialized medicine.” The AMA lobbied with private insurers to undermine President Obama’s efforts to include a public insurance option in the Affordable Care Act which could have shrunk the number of uninsured, now at thirty million.

Seventy percent of Americans support universal health care as presented in the Medicare for All Act of 2019, a bill in Congress to improve and expand the Medicare system, which the AMA actively opposed with the Partnership until this month.

To be clear, the physicians’ group has not officially dropped its opposition to Medicare for All, but its recent 53%-47% delegate vote was the closest they have come to changing their position since the AMA first opposed single-payer health care in the 1940s.

More importantly, the AMA will no longer contribute to the millions spent by the Partnership to kill the bill. Last year alone, the group collectively spent $143 million on lobbying Congress, according to the Center for Responsive Politics.

In 2018, the AMA had over $550 million in reserves alone, so it does not lack the resources to put money behind its priorities. Most would not believe that a bunch of grassroots activists could stop a 172-year-old professional organization in its tracks. Such a feat would be nothing short of David felling Goliath.

But that’s exactly what we did.

Sameena Mustafa is a past Congressional candidate for IL-05 and advisor to Jane Addams Senior Caucus, part of the People’s Action network.