What Did You Do And Say Before You Ran For President? 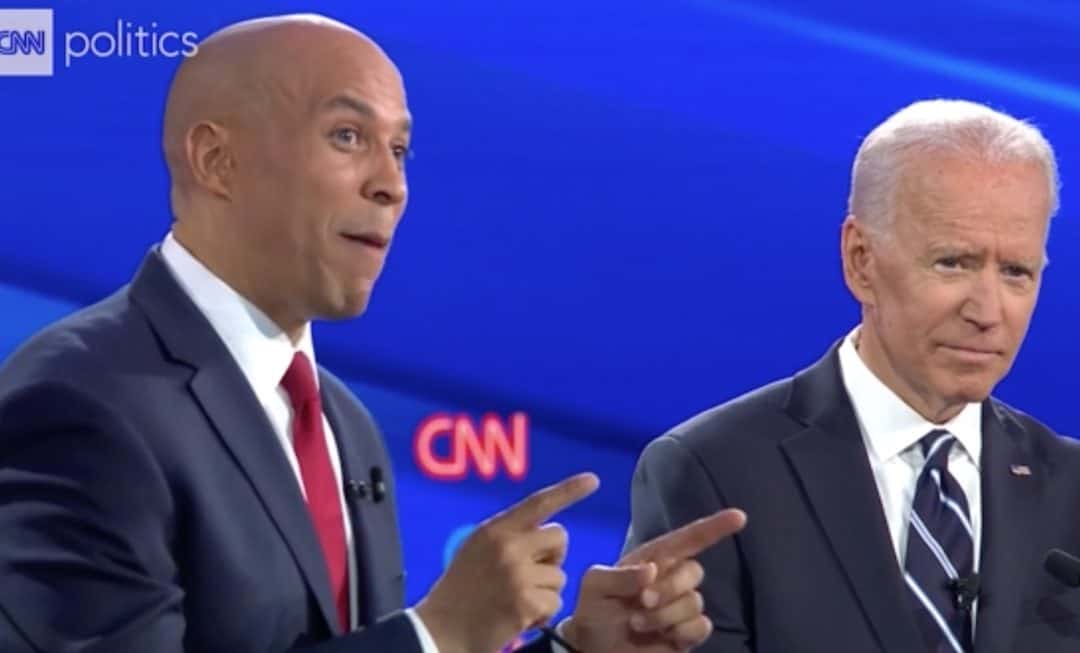 Watching presidential candidates spar onstage in their last debate, I shared some of Senator Cory Booker’s frustration. Booker lost his cool when former Vice President Joe Biden tried to paint himself as a criminal justice reformer.

“The house was set on fire," said Booker, reminding Biden that the “tough on crime” policies he backed as a Senator from Delaware put thousands behind bars. "You can’t just now come out with a plan to put out that fire.”

As the 2020 presidential campaign builds, People’s Action and its member organizations are excited to see an unprecedented number of women and people of color take center stage as candidates, along with issues like Medicare For All, Free College and 100 Percent Just Energy For All.

But the sheer number of candidates, and the infighting between them, can be daunting.  So let’s take a step back and ask a few fundamental questions of the candidates from the perspective of People’s Action and movement activists.

The first of these, which Booker asked Biden and which we should ask every presidential hopeful, is:

What Did You Do and Say Before You Ran for President?

Many grassroots activists were energized by the candidacy of Bernie Sanders in 2016. It was the first time in decades that a serious contender didn’t take the Neoliberal worldview, and the false consensus around it championed by the Democratic Leadership Committee, as a given.

For nearly two decades, the DLC and their “Third Way”candidates promoted Wall Street-driven “solutions” that were little more than Reaganomics rebranded with a social face.

Sanders made it finally ok to talk openly about government’s responsibility to come up with solutions to intractable social problems that the marketplace fails to solve.

By championing social goods, Sanders articulated many of the ideas now on the national stage. Medicare For All and Universal Free College have since become so overwhelmingly popular that most of the current cast of Democratic candidates embrace many, if not all, of these ideas.

Indeed, this leftward shift demonstrates how far the needle has moved on the promises at the heart of the Democratic Party. But when it comes to promises, we know all too well how few are kept once candidates take office.

That is why this must always be the first question we ask.

So, candidates, over the course of your careers, have you taken buckets of money from big pharma, then voted repeatedly on their behalf? If so, forgive me if I don’t believe you now when you cry loudly about the high price of prescription drugs.

But we don’t want to throw every Democratic baby out with the bath water.  That leads to my second question:

How Have You Evolved Over the Years?

"We believe in redemption in this party," New York Mayor Bill de Blasio told Biden, reminding him of his flip-flops on trade. “Well, I hope you're part of it,” Biden snapped back.

Change over time - and not just now that you’re running for president - counts.  Who among us has not evolved over the years?

This principle may play out most profoundly with Massachusetts Senator Elizabeth Warren.  If a candidate says, as Warren essentially does, “I used to believe in Reaganomics, and that people were poor because they were lazy, until I visited bankruptcy courts throughout the nation,” that strikes me as a very plausible origin story.

So having once been a Republican no longer counts for me as points against a candidate.  Surely, there must be a place for redemption and change - or we’re all lost. But we must ask if a candidate’s subsequent behavior demonstrates true change.

My third principle takes this assessment a step farther. This one gets at the heart of a key tension in co-governing: It has to do with the world as it should be, and the world as it actually is.

And this is perhaps best articulated not by a politician, but by the Rolling Stones:

This question lies at the heart of all politics and strategy. Which policy deals sets us up for more progress and expanded power, and which ones will set us back?

Spoiler alert: The answer to this question is NEVER taking your marbles and going home, sitting out the game, becoming inactive and alone. There is a great deal of room on the continuum of compromise between purity and expediency, where any deal will do as long as you can claim some result.

On the electoral front, this means that even if a DLC centrist gets nominated, activists will vote to block Donald Trump. Yes, I will vote for that candidate, too, and even campaign for him or her - not because he or she hasn’t demonstrably been a disaster for just about every issue I care about, but because he or she is not going to clamor for outright racist and fascist policies and appointments.

Yes, it is a lesser of two evils, but some possibility for good is better than no possibility at all.

Here’s why I say this is at the heart of co-governing.  Because even as we elect more and more people’s champions to office, they will remain a tiny minority of the legislative landscape. They alone do not have the power to move our agenda. Only shrewdness and strategy will enable their impact to reach beyond their numbers.

But even if we get to a place where grassroots leaders become an actual majority in legislatures, we will still need a broad social alignment in order to govern. We will need to build a broad consensus around the issues we care about most: public and democratic control of the economy and wealth, racial and gender equity, and always choosing to put people over profit.

For progressives, isolating ourselves behind a veil of purity is the antithesis of power. That means we form relationships with the full cast of characters - from complete champions to those we can only caucus with from time to time.

The Force Of Change

The radical change in tone we’re hearing on the debate stage is evidence of how we’re gaining ground, and can begin to govern, even in the midst of hostile forces.  The forces that inexorably pull the Democratic Party towards the center - and the consultant class that serves them - are still firmly in place. But it is also evident that bold solutions to serious problems are now not only on the table, they are within reach.

So we should celebrate, not complain, when even the most disingenuous candidates tailor their positions towards the growing number of voters who want real solutions. If our mission is to redefine what is “politically possible” in the United States and to govern, rather than simply feeling self-righteous, we should use our newfound power to push candidates towards bolder and clearer commitments, rather than condemning their late arrival or lack of true belief.

The same holds true of co-governing in general: We must resist individualistic moralizing and keep our eyes on the prize: growing power and making political progress for those who need it most.

David Hatch is a longtime community organizer in Chicago, where he was executive director of Reclaim Chicago and founder of The People’s Lobby, part of the People’s Action national network of grassroots groups.