The High Price Of Insulin Is Killing Me 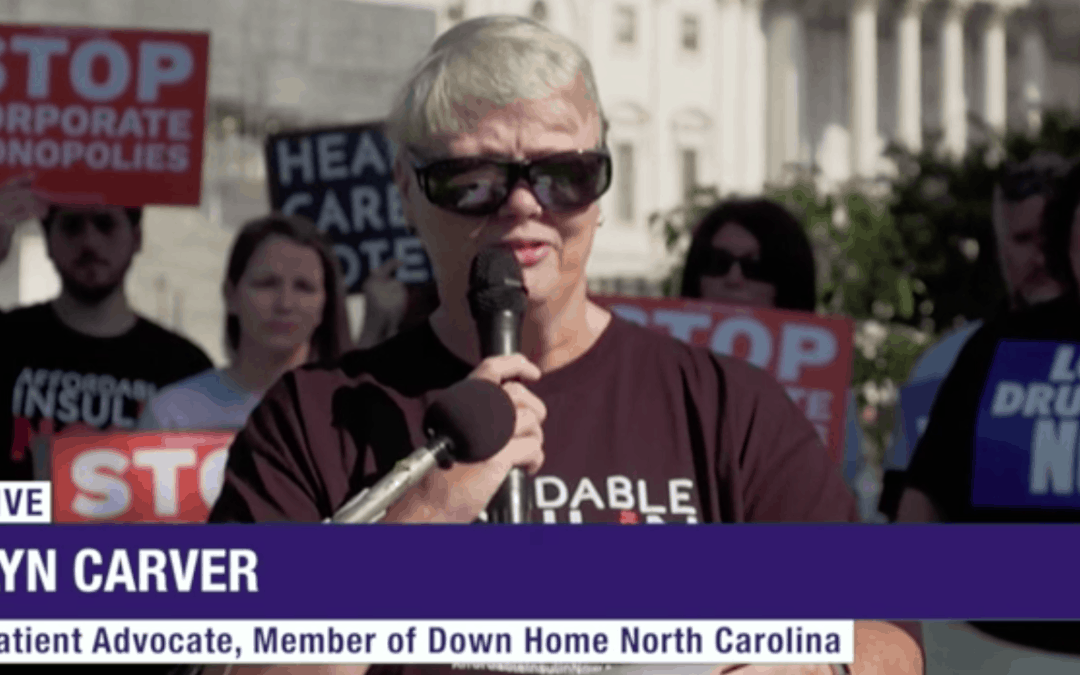 Lyn Carver, a member of Down Home North Carolina and People's Action, shared this testimony on Capitol Hill in a press conference with diabetic patients and progressive lawmakers to demand lower prices for prescription drugs.

I find myself very grateful that I’m a Type 2 diabetic and not Type 1. Because if I were Type 1, then the insulin rationing I’ve been doing over the last six months probably would have killed me by now.

I know it’s not smart. But I also know I had no other real choice. The high price of insulin, caused by the price gouging of big pharmaceutical makers, puts my life on the line every day.

The effects of insulin rationing showed up in my elevated A1C level at my last specialist visit. This test measures how your body manages the level of sugar in your blood. Like so many others who, like me, suffer from diabetes, my first thought was not to blame my poor result on those truly at fault - big pharma and the greedy lawmakers who take their money, then turn a blind eye to the lives lost to our broken healthcare system.

I knew my doctor was disappointed, because after many years I’d finally gotten my diabetes to the point where he could call it "under control". That’s a pretty big deal. And now here we were, six months later, and my numbers had gone up over a point, and it was out of control again.

I didn’t tell him the real reason for this rise, because I was ashamed that I had to ration my insulin. I felt like it was somehow a character flaw that I wasn't able to afford my insulin. He would have said, "I would have given you samples."

He gave me samples when I told him I was having trouble paying for the medication. He also gave me savings cards, which work only if you have insurance. But if you’re a cash-pay patient like me, you’re out of luck. He searched all over the office for more samples, then said he would have some for me the next week. Except I live several towns away, and I wouldn’t have gas money to get back there.

Instead I said, "Okay, thank you." Maybe I could figure out some way, I hoped, to get back to his office to get the samples.

I shouldn’t be ashamed. I should be angry. I don’t understand why my insulin pen costs $636 for less than a month’s supply. No, I do understand, actually. Greed, that’s all.

Because we need insulin to survive, to actually, literally survive, they charge what they can get away with.

North Carolina Senator Thom Tillis has received $139,626 in campaign contributions from pharmaceutical companies. Thom Tillis voted for all three Republican attempts to repeal the Affordable Care Act (ACA), all of which would have cut coverage, raised costs and gutted protections for people with pre-existing conditions.

1.6 million people in North Carolina like me, Senator Tillis's constituents, have a pre-existing condition.

At one of my full-time jobs, I fell asleep in the bathroom because my blood sugar had spiked. Often. Sometimes daily. They probably thought I was playing games on my phone, but honestly, I had virtually passed out. I never told anyone.

I’m behind two months on my rent. I work as a transcriptionist and a subcontractor for the local post office. I’m looking for better, more stable work, but it’s difficult when my blood sugar is so erratic, and my other chronic medical conditions can’t be stabilized because I don’t have insurance any longer.

Republican-controlled North Carolina won’t expand Medicaid, and my income is too low for me to qualify for the ACA tax subsidies. It’s difficult when my fatigue is so great that getting to the job center takes all of my energy and strength.

My car needs work. My teeth need work. I need my yearly diabetic eye exam. I need new glasses. My weekly shot ran out this week. On my way out of town, I stopped at my doctor's office, and fortunately he had a sample for me that will last me a month. I'm hoping I have enough of my other shot until NC MedAssist gets it to me, or figure out a new way to find samples. Because I sure as heck don’t have the $630 it would cost me to buy my injection with self-pay.

I’m a mom of three grown children, and a grandmother. I’m a former Navy spouse, and most importantly I’m a human being. This should be a no-brainer. Nothing that someone’s life depends on should be for profit. If I don’t have insulin, I die: a little slower than if I were Type 1, but I die nonetheless.

I could commit suicide that way, in fact. A painful, horrifying death consisting of gangrene, amputations, failing organs, and a painful death for myself and the people who love me and have to be by my bedside, and then my grave. I’ve seen others go down that path.

Right now I have most of the feeling in my feet and legs, I have all my toes, my organs are functioning fairly well. But it doesn’t take too much for things to start to go bad very fast.

Your greed kills, Thom Tillis, and I don’t want it to kill me or anyone else. Are you listening?

Lyn Carver is a mom of three grown children, a grandmother, a former Navy spouse and a member of Down Home North Carolina, part of the People's Action network of grassroots groups.