The AMA Stops Us From Getting Health Care 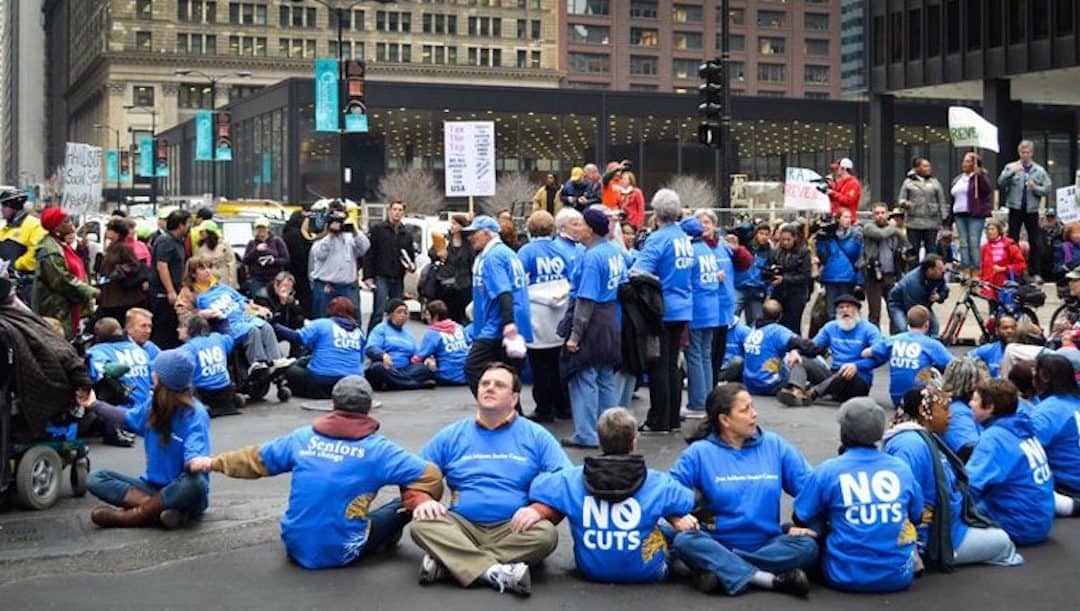 The American Medical Association needs to wake up and smell the coffee. Because we smell something bad, and it’s you: The way you keep Americans from getting health care is rotten to the core.

AMA, you can’t fool me, and the millions like me who now know who you really are, and what you actually stand for. We demand you step out of the way of Medicare For All, which is the health care we want and need.

You’d think the nation’s largest association of doctors – whose stated goal is “the betterment of public health" – would want patients to get care. But the AMA has opposed every major effort to expand health access since 1917. That includes the national health insurance proposed in 1945 by President Harry Truman – who you accused of following the “Moscow party line”- and Medicare, which once again you denounced as “socialized medicine” in 1965. You did want to keep hospitals segregated, and refused to admit African-American doctors to your association until 1968.

The Red Menace is long gone, but the AMA still fights tooth and nail to restrict access to health care. Most recently, the AMA joined private insurers, hospitals, and pharmaceutical makers to create the “Partnership For America’s Health Care Future.” This new lobby has one explicit goal: to kill the growing momentum towards Medicare For All.

Why would they do this? Because single-payer health care, which works so well in other countries, would reduce the outrageous fees some doctors charge in our bloated system, and end the stranglehold that for-profit interests currently have on patients and their pocketbooks.

The United States spends twice as much on health care as other industrialized nations, yet has at best mediocre health outcomes. You’d think that would trouble the fine doctors of the AMA.

Truth be told, many doctors can’t stand our health system, either. Our system of private insurance forces doctors to become bill collectors. They waste time they could spend offering care to patients worrying if they’ll get paid. They’re forced to spend far too much time and resources chasing after preauthorizations from insurance companies. Like patients, they don’t know for sure if a treatment will be covered until a claim is submitted.  How is it that insurance clerks can overrule doctors?

That’s because the business model of our current health-care system is to discourage access to care and deny as many claims as possible to maximize profits. We’re the only industrialized country whose health industry is organized around the principle of providing care based on ability to pay. That’s wrong.

That’s why I’ll be standing with People’s Action, the Jane Addams Senior Caucus and the Illinois Single Payer Coalition in protest when the AMA meets in Chicago this weekend. We demand that you and the other members of the Partnership For America’s Health Care Future step out of the way of Medicare For All. We are going to win care for every American, with or without you.

I woke up to our health care crisis when I approached retirement age. For most of my career, I was a corporate trainer for Shell, Sears and other Fortune 500 companies, and had insurance provided by my employer.

Since I was not yet 65, I contacted an insurance broker – who sent a doctor to my house to evaluate me. I was then told – this was nearly twenty years ago – it would cost at least $5,000 a year to get insurance, plus $3,000 in out-of-pocket expenses, and they would never cover the three age-related conditions that were most likely to kill me.

Now I have Medicare – but because that’s slowly being privatized, I still pay over $4,000 every year in out-of-pocket medical costs.

And millions of Americans have no insurance or access to care at all. There’s a couple I know whose daughter ended up in a pediatric ICU because they couldn’t afford the asthma medicine and $700 visits to a pulmonologist their insurance refused to pay.

Other children suffer brain damage or die during severe asthma attacks, just because they can’t afford readily available medications. These deaths are unnecessary, and are blood on the hands of those who refuse care for the sake of profits

My own brother lost his insurance when his wife – who worked at a hospital – lost her employer-based coverage. Her hospital was bought out by Mercy Health, a large network of faith-based hospitals. Mercy, when they took over her facility, decided to cut costs by reducing coverage to their own employees, without telling them. So when my sister-in-law got sick, and sought care at her own hospital, she got a $54,000 bill. She was then told not to come back for care before she was destitute.

Sadly, these are just two of the thousands of stories about how our health care system fails us. That’s why we’re standing up to the AMA, private insurers and hospitals to say enough is enough. It’s time to put patients first for once in this country, and offer Medicare For All to every American.