Change is Coming To A Presidential Forum Near You 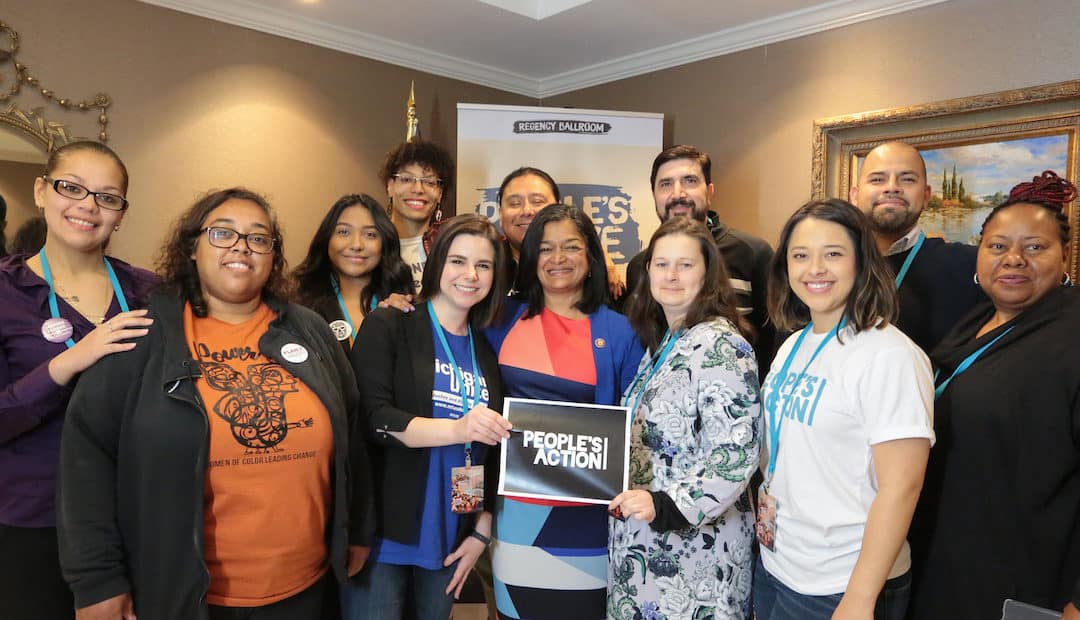 Evelynne Castillo is eighteen, the daughter of a undocumented immigrant in Mesa, Arizona. Laural Clinton is a widowed mother of three Black boys in Des Moines, Iowa. Brandy Staples lives in Maine, where she was diagnosed with Stage Four breast cancer at age twenty-six. Jasmine Flores is from Erie, Pennsylvania, where she’s watched schools close and her neighborhood vanish as the houses she and her friends grew up in get knocked down.

What do these four women have in common?

All four know it’s time for a change in this country, and all four demand more from our leaders. All four are members of People’s Action.

That’s why, along with nearly 1,000 delegates from the forty-eight People’s Action member groups in thirty states, they attended the #PeoplesWave convention in Washington, D.C last month.

And that’s why, in Washington, all four voted to support our People’s Platform, which demands bold solutions for our nation’s crises in health care, housing, racial and gender justice, and education.

And now Evelynne, Laural, Brandy and Jasmine are all ready to take the next step: as we enter the 2020 presidential race, they, and we, will hold candidates accountable to the people, and demand solutions that will make a real difference in their lives.

“Fighting back is not just about removing bad people from power, but electing leaders who share our values into public office,” says Laural. “That's why we need to take back our government, and we are going to elect a people's champion to the White House who can end mass incarceration and our other problems. Don’t you agree?”

Laural and her fellow members of the Iowa Citizens for Community Action Fund along with Iowa Student Action will host a People’s Presidential Forum in Des Moines on September 21st. At this event, 2020 Presidential candidates will be invited to engage with, and answer to, real people like her who are affected by our government’s failures.

“Who is ready to fight for the world we deserve? We are,” says Laural. “We have a plan, and now the hard work begins. See you in Iowa – you just got invited!”

At all events, presidential candidates will be asked where they stand on issues from the People’s Platform that include Improved Medicare For All, a 100% Just Green New Deal, Free College For All and a Homes Guarantee.

“Life is getting harder for younger people like me, and I thought I was alone in my views,” says Jasmine, a member of Keystone Progress. “Then I realized there are a ton of people like me: We are the bulk of the multi-racial working class, and we are not represented in our government. We just need to get organized and informed. “

Laural, Jasmine, Evelynne and Brandy aren’t asking permission to change their lives and those of people they love. They know that when we stand together, we are strong - and we can enact real and lasting change in this country.

So join us, and join them, at the People’s Action Presidential Forums this fall.

As Laural says, you’re invited – click here for more information, and sign up to attend a forum near you.