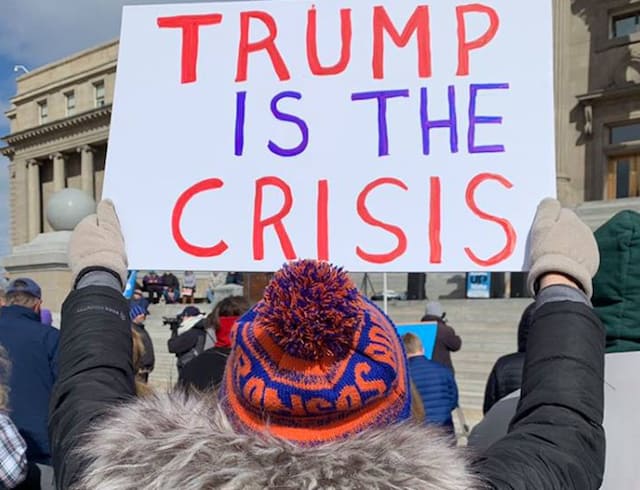 Donald Trump has proven himself unfit for the presidency at nearly every twist and turn. The lengths he will go to circumvent the constitution, violate the rule of law, and sink to unthinkable depths of immorality are shamelessly on display.

These efforts are only possible because of a more insidious danger – a man who has conscripted the Republican party to destroy our democracy, and the institutions designed to protect it.

Sen. Mitch McConnell (R-KY) is Trump’s most powerful weapon and one of the greatest threats to democracy, and the health and well-being of everyone in America.

This week, when asked about Democratic proposals including Medicare for All, McConnell said, “If I'm still the majority leader of the Senate after next year, none of those things are going to pass the Senate. They won't even be voted on. So think of me as the grim reaper. None of that stuff is going to pass. None of it."

Let that sink in. McConnell wants to be known as the personification of death in the form of a cloaked skeleton wielding a large scythe.

McConnell wields his power in the Senate to diminish the checks and balances designed to protect our nation from autocratic rule. He’s determined to take away your health care, and he's motivated to do whatever it takes to make sure that happens, just so he can demonstrate this power.

Remember McConnell’s repeated and failed attempts to repeal the Affordable Care Act, decrying all the while that entitlement programs cost too much and must go? Then he ushered through the GOP tax bill, handing tax cuts to corporations and the wealthy that are estimated to increase the federal debt by $2 trillion over the next 10 years, and triggering cuts to vital programs for middle- and low-income people.

Disguised as a tax cut, this tax giveaway to the rich destabilized Medicaid and crucial resources that offer assistance to our poor, elderly, and people with disabilities. It put Social Security that people have worked a lifetime for, and rely on in retirement, at risk by driving up the deficit. It reworked medical tax deductions and threatens 13 million people who could lose their health care by 2027, according to the Congressional Budget Office.

McConnell exerts his power to destroy the very institution he presides over, and stack the courts with ideologues. By bending the rules to his liking, he has rammed through a record number of judicial confirmations to the lower courts, many to lifetime appointments, and landed two arch-conservative nominees - both hand-picked and groomed by far-right judicial activists - on the Trump Supreme Court.,

With pending legal challenges to the ACA he’s doing everything in his power to ensure arguments come before a Supreme Court of his making.

In his relentless pursuit of power, Sen. McConnell made a grave misstep – he underestimated the real power of any democracy – people. But, people across this country are rising up like never before to revise and remake a democracy that works for all people.

People from every part of our nation: urban, suburban and rural communities, are building a movement that doesn’t have any room for bad actors like Trump and McConnell.

A storm is coming to those who think democracy is theirs to ruin: a people’s wave. It’s the power of a bold, multiracial, working class movement of people who are organizing in states across this country. We’re advocating for the issues and values that unite us.

We’re holding elected officials accountable to us; unseating those who aren’t, and electing people who will be. And we’re winning. We won the House last November, and Mitch here's news for you: we will win your seat and award it to someone worthy of holding the office.

We are building real power – for and by the people. You might believe that you reign over American democracy like a potentate, but you can’t stop a #PeoplesWave. That’s what real democracy looks like.

Adrienne Evans is the executive director of United Vision for Idaho. She’s in Washington, D.C. this week along with a thousand other progressive grassroots activists for a People’s Action convention. She lives in Boise.