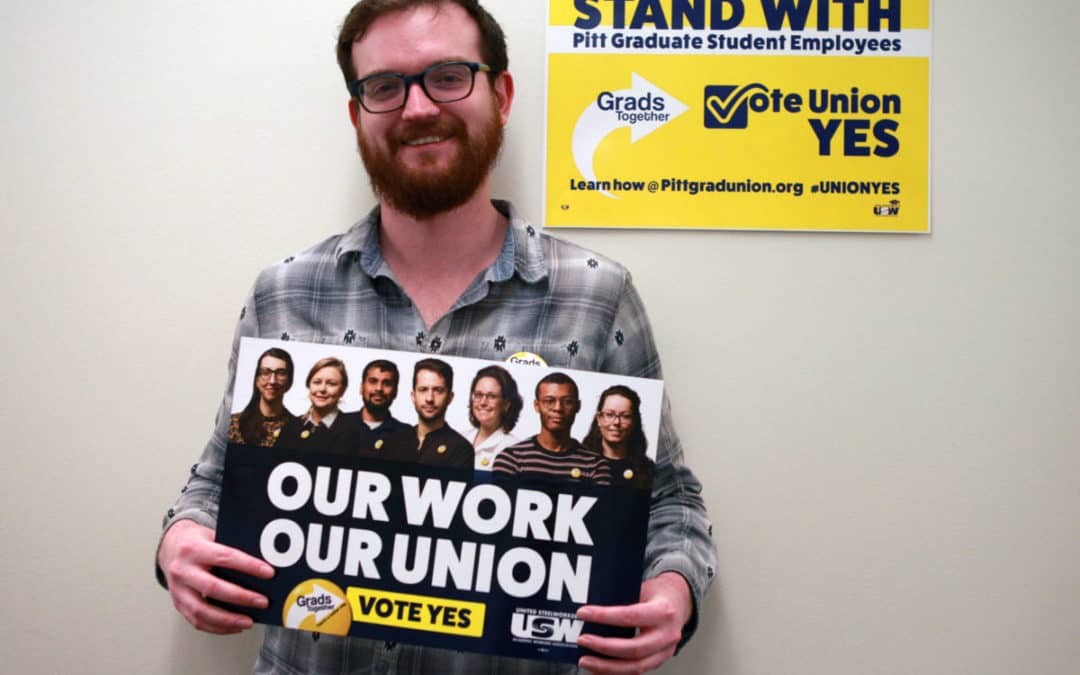 But 2,000 graduate students at the University of Pittsburgh are voting this week on whether to become members of the United Steelworkers (USW) union.

The USW has evolved since it was forged in 1942. Now its members build tires, smelt aluminum, make paper, refine oil, produce iPhone glass, serve as physicians, pharmacists and nurses, and teach university classes in the United States and Canada.

A blue collar is not required to be a USW member. All that’s necessary is a sense of belonging to a team of co-workers who believe they all benefit from banding together to jointly seek better wages and working conditions from their employer.

It’s not just the USW, either. Other labor unions also have been organizing white-collar workers in record numbers. College instructors, full- and part-time, and grad student teachers and researchers have joined the American Federation of Teachers and the National Education Association but also the United Auto Workers and the Service Employees International Union.

The strategy of abandoning the impotence of the individual and embracing the power of the pack was successful for workers in the three decades after 1935 when the National Labor Relations Act (NLRA) passed and provided a clear path to unionization.

At the height of unions’ strength, nearly 30 percent of the U.S. workforce was represented. Workers’ wages rose and the grotesque income inequality of the robber-baron age declinedprecipitously. Union workers’ higher wages pulled up non-union workers’ wages. America’s middle class was born and thrived.

That is, until the mid 1960s. Then union membership began to shrivel. Now unions represent only 10.5 percent of U.S. workers. And, as membership dipped to levels lower than in the years just before the NLRA passed, workers’ wages stagnated. The richest 1 percent once again seized for themselves all of the profits produced by the sweat of workers’ brows.

Graduate students could see this happening to them. They receive precious little while administrators get quite a lot. They aren’t driven by jealously, but by necessity. They’re burdened with more and more education debt and can barely scrape by. 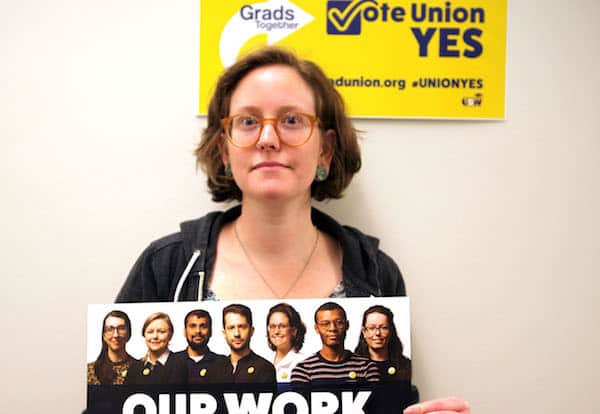 It’s not a matter of blue or white collars. It’s understanding where grad students are in the big scheme of things, Kim Garrett, a Pitt grad researcher seeking a doctorate in public health, told me.

“Academics can think of themselves as outside of the working class, but we are all the same,” she said.” We are all working for essentially the same boss who makes so much off our labor. Our research makes millions for the university and we struggle to support ourselves.”

Garrett, and three other Pitt grad students I spoke with, had no connection to labor unions before joining the effort to organize at the university. This is not surprising since such a tiny number of U.S. workers now have the benefit of union representation. 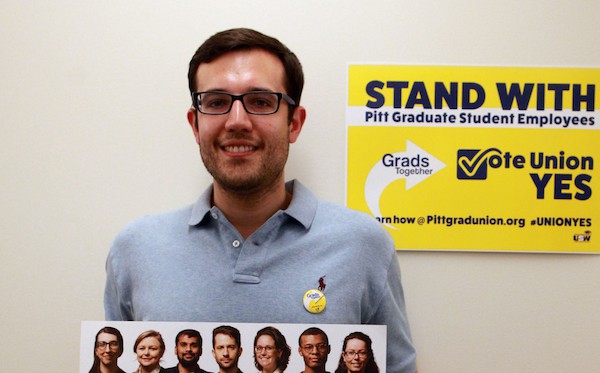 One of the four, Mark Azic, a teaching fellow who is in a doctoral program in economics, told me that when he was about 10, his father briefly belonged to a union. But Azic remembers nothing about it, including which union it was. None of the other students had parents who were ever union members.

The grad students said they were drawn to the organizing effort because they felt collective action would succeed where individual efforts had failed. This propels most unionization efforts, no matter the type of employer.

“Individual workers have no power in the workplace,” Azic said. He talked about his father who was employed by a company that contracted out his position. The working conditions deteriorated after that, even as his father was performing the same work in the same place.

Azic said his brother had the same experience. He was hired as a contractor and does not get the same quality health insurance as workers employed directly by the corporation. As individuals, he said, they can’t change any of this. But with a union, they might be able to.

Alison McIntosh, a teaching assistant working toward a Ph.D. in critical and cultural studies in the English Department, told me that she had a friend who tried to go it alone. The friend asked the English Department for a raise and received a $30 bump. It was an increase of $1 a day. Not $1 an hour; $1 a day. “What is that?” McIntosh asked. She answered with disgust, “That is nothing.”

Many grad students at Pitt receive $18,000 for two semesters’ work either teaching or performing research, health insurance for one person, free tuition and a bus pass. It is enough for an ascetic life for a single person in Pittsburgh, Josh Palmer, who is working on a master’s in creative writing, told me. In the summer, he will receive a fellowship to cover the costs of continuing his research for a book-length manuscript, but the fellowship is not supposed to cover rent, so he will have to dip into savings or borrow more money.

Married students, especially those with children, must pay for health insurance for their families, and those costs severely cut into the $18,000. In addition, many grad students must make payments on debt they owe for their undergraduate degrees. So they take out more loans and work second jobs.

“I am getting by. I am not living it up,” Azic said. “I have a roommate who is a Ph.D. student at Carnegie Mellon, where they do pay better.”

Azic said one reason he began supporting the union effort is the tiered system at the university, which pays administrators very well, salaried professors less, grad students dramatically less, and part-time instructors, often doctoral graduates hired as contractors to teach a course at a time, a pittance.

If a graduate student no longer qualifies for the $18,000, they’re eligible to be paid as a part-time faculty member. In that case, Azic said, the pay could be cut to $9,000 for the same workload. “That is nuts,” he said, half pay for teaching exactly the same courses. Knowing how much work is involved in teaching, he said, “You would be better off working as a server at Applebee’s.”

Azic said university administrators don’t understand grad students’ lives. “On a day-to-day basis, many administrators have no real contact with graduate students. Even if they mean well, they are disconnected. They are in their 50s, got their Ph.D. 30 years ago and make $200,000 or $300,000. They cannot vouch for our needs as well as a graduate student union could.”

Pitt, like virtually all private employers facing an effort to unionize, fought it. Such anti-union campaigns by corporations and right-wing politicians are big factors in the decrease in unionization in the United States.

Pitt sponsors an anti-union website with questionable assertions. The university hired a union- busting law firm. And it challenged the grad students’ right to organize, contending they were not employees, even though this gambit has failed at other universities repeatedly in the past. Pitt lost its case too, but managed to drag out the process, delaying a vote on the union by more than a year. Then Pitt tried to schedule the election in buildings where grad students might be particularly intimidated by anti-union staff.

This is the crap of corporations – threatening workers, lying about what will happen if workers choose a union and paying anti-union law firms instead of providing workers with raises. It’s very common for corporations to fire union organizers, even though that’s illegal.

None of the grad students I talked to were scared, though. Garrett said she wears a union button on campus and has signs at her desk, but has felt no push back. “It is not something I am worried about. I think that my research integrity and the quality of my work would overcome any kind of bias like that. Maybe I am naïve.”

Palmer said he’s felt no blow back but didn’t anticipate any because the tenured English professors seemed either neutral or supportive. Pitt faculty members also chose the USW to help them organize.

Palmer got involved because he felt writing bitter comments on websites and leaving angry voice mail messages for politicians were fruitless. “I was looking for more ways to use my time to feel productive. Organizing on the ground is tedious and laborious. But it is the stuff that really matters instead of just being angry on the internet.”

It may serve him well in the future, too, because writers need unions. Hundreds of newspaper reporters and magazine writers have been laid off in recent years, and freelancers often have difficulty getting paid. Unions, Palmer said, would really help them.

His work organizing at Pitt may put him in the forefront to aid the surge in white-collar organizing nationwide.