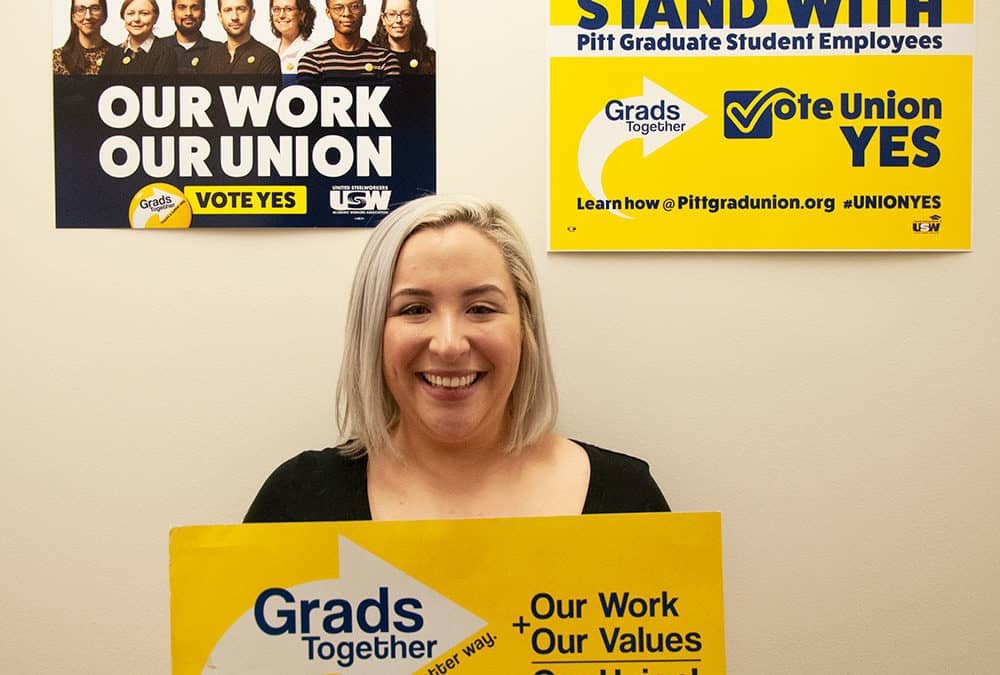 Alison McIntosh learned early that life is a little easier with help from friends. Her first professional job reinforced that notion. And now, as a University of Pittsburgh graduate student, she is asking her co-workers to embrace collectivism.

McIntosh, who is working toward a Ph.D. in critical and cultural studies, is urging her fellow teaching assistants, graduate student researchers, and teaching fellows – 2,000 of them altogether – to vote next week to join the United Steelworkers (USW) union. “We have more power collectively. We must work together and across the board,” she told me.

Though she knew little about unions before she started talking to organizers at Pitt, her life experiences compelled her to embrace the idea that if Pitt’s fragmented bunch of graduate researchers and teachers pulled together, their joint voice would be strong enough to persuade the university to make their lives a little easier.

McIntosh’s experience with collectivism began with familial support. She was poor and Jewish in Gwinnett County, one of Georgia’s wealthiest places and one where Jews were rare. The closest synagogue was an hour away in Atlanta. There were no other Jews in the neighborhood. She recalls a classmate feeling her scalp in search of horns. Classmates slipped Bible verses into her book bag and desk, and though a teacher asked them to stop after her parents complained, the teacher also told them, “I know what you are trying to do is the right thing.”

Her two older sisters and younger sibling suffered the same harassment. Kids threw pop cans at her sisters at the bus stop. A principal accused one sister of sporting gang symbols, until her mother showed the principal her matching “gang symbol” – a Star of David necklace.

McIntosh’s father worked constantly to keep the family afloat, and her mother, who suffered from addition, was often gone seeking treatment. So the siblings banded together. “We took care of each other. I learned from them that we have a responsibility to each other as people. I taught my younger sibling how to read because my mother could not do it, just like my sisters did for me. I learned that you don’t get to pull yourself up at the expense of others or leave others behind.”

McIntosh took out loans and studied English literature and history at Berry College in Mount Berry, Ga. Then she went to one of the most impoverished areas of Mississippi to teach. She recalls thinking that she would be the “great white savior” for her mostly African American students. She said the greatest lesson she learned is that progress she made depended on teamwork.

“I struggled mightily to make headway and to support my students,” she recalled. “When I did it well, it was because I leaned on or worked with people who had already made that commitment and who had suggestions and tips and tricks and who helped me. That is where I had success – in teamwork. My success required other people to be very generous to me, in a way that is very warm to my heart. I feel like I have to pay back that to others because that was so generously extended to me.”

After McIntosh taught for two years and took a year off, Pitt’s English Department accepted her into its Ph.D. program. Eventually, she hopes to work for a nonprofit or in an administrative position where she can support teachers to make reading and writing instruction more effective.

Within her first few weeks at Pitt, a USW organizer approached her. “I was from the South, where there are few unions and weak labor laws, so I didn’t know very much about unions,” she said.

But she was interested because the union philosophy was her philosophy. Also, when she began teaching at Pitt, she said, “I realized how little money I was getting for how much work I was doing and how little protections we had. The union seemed like a way to get forward momentum on pay, leave, and grievances for mistreatment.”

She joined the organizing committee and began talking to other grad students about the union. “This is about me, but it is also paying forward and across,” she said. If a union is in place, it will establish structures that will help future students.

Her greatest contribution to the effort, she says, is her ability to talk to anyone. She is a lightning rod for people who are dissatisfied. “People come to me with their problems,” she said. She tells them change won’t occur overnight, but joining together as a union will prompt action.

“One good thing about union organizing folks is we are not afraid to make ourselves heard,” she said, noting, “I come from a long line of big, loud Jewish women unhappy with the state of the world.”

McIntosh believes based on experience that teamwork can help fix the state of the world. And she intends to be part of that.