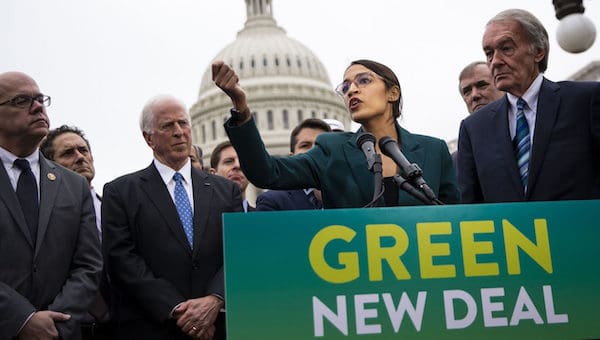 Hillary Clinton, with her focus group-tested moderation, may have failed to break the glass ceiling. But Alexandria Ocasio-Cortez, with her fearlessness, outspokenness, and mastery of social media has broken another piece of metaphorical glass – The Overton Window -and transformed the terms of acceptable political debate more than any Democratic political figure in recent history.

Regardless of whether or not AOC moves on to a higher office, or is even reelected to her House seat in 2020, she may already be one of the most impactful Democratic office holders in recent memory.

What, many of you may ask, is the Overton Window? The Overton Window reflects the range of policies on a particular issue that are acceptable to discuss in “polite company,” are taken seriously by the mainstream media, and that mainstream politicians believe they are able to advocate.

For example, on health care, following are a range of possible policy views:

Alexandria Ocasio-Cortez has managed, other newly elected Democratic women like Ayanna Pressley, Katie Porter and Rashida Tlaib and the grassroots movements backing them, to blow the pre-existing Overton Window wide open in a few short months since the 2018 elections.

Using a combination of Big and Bold thinking, an instinct for the political moment, personal charisma, grassroots activism, and social media savvy, they have moved issues like The Green New Deal, Medicare For All, and large tax hikes for corporations and the wealthy from the political margins to policies being widely debated at kitchen tables, political campaigns, and in the mass media.

During the Obama administration, there were massive fights between Republicans and Democrats over whether top marginal income taxes on the wealthiest Americans would be approximately 35 percent or approximately 39 percent. The idea that the rich should pay 40 percent or more was simply outside The Overton Window.

There’s something deeply ironic about this artificial political rate cap: In the 1950s under Republican President Eisenhower, top rates exceeded 90 percent, and when Reagan took office, they were still at 70%. Reagan cut the rates to 50 percent and under George H. W. Bush, they went as low as 28 percent until Bush was forced to break his “no new taxes” pledge and agreed to an increase to 31 percent. Clinton raised the top rate to 39.6 percent, the highest in the past two decades.

Starting with Reagan in 1980, relentless and single-minded Republican propaganda in favor of “supply-side” economics, which hold that the solution to every problem is cutting taxes, has successfully moved the Overton Window to the right, so that no mainstream politician, Democratic or Republican, would dare propose a rate on the richest Americans higher than 40 percent.

Then, in her first 60 Minutes interview, AOC captured headlines by calling for a top marginal tax rate of 70 percent on incomes over $10 million. Shortly thereafter, Sen. Elizabeth Warren proposed a “wealth tax” of 2 percent a year on the accumulated assets of the 75,000 wealthiest American families worth more that $50 million and 3 percent over $1 billion. Since then, several other Democratic Presidential hopefuls have put forward their own proposals for taxing the wealthy more.

The Overton Window exploded in the wake of this, and moved sharply to the left. Suddenly higher taxes on the rich are being discussed on TV talk shows and being debated in the Presidential contest. Even fairly centrist Democrats no longer feel constrained by an Overton Window which cast tax rates over 40 percent outside the range of “legitimate” debate. Even if top marginal tax rates only increased to 50 percent (where they were after Reagan’s tax cut), they would be substantially higher than in decades. Kudos to AOC and her allies in smashing this Overton Window on taxes.

The Green New Deal is the quintessential example of smashing The Overton Window. Until now, acceptable debate on climate change was limited to a range from Republican climate-change denial, to relatively timid proposals from Democrats which are likely too small to solve the problem before catastropic damage is done to the planet.

When Obama took office, his main legislative initiative on climate change was to propose a market-based “cap and trade” system, rather than government regulation, designed in Republican think tanks in the naïve hope that enough Republicans would sign on to at least pass something. The bill did squeak through the House, but died in the Senate. Obama essentially gave up on climate change legislation for the rest of his tenure.

The Green New Deal explodes the prior Overton Window limitations that the most that can be done about climate change is too little, too late. Instead, it’s big and bold. It holds that the threat of climate change to human civilization requires a response as massive as FDR’s New Deal in response to the Great Depression, and the massive mobilization to fight World War II after the Japanese invaded Pearl Harbor.

The core goal of the Green New Deal is to transition to 100 percent clean energy by 2030. It would require a massive investment in clean energy jobs and infrastructure meant to transform the entire economy into one based on clean energy, while making society more fair and just.

The idea of a “Green New Deal” as a broad, societal response to climate change has been around since around 2006, but has been politically marginalized. AOC changed all that, again breaking the Overton Window, and has thrust Green New Deal into the center of political debate.

AOC and Rep. Ed Markey have introduced a bill in Congress setting out the goals of The Green New Deal. Between now and 2020, more specific policies to achieve The Green New Deal will be developed. In the meantime, grassroots organizations like People’s Action and the millennial-led Sunshine Movement, have begun to engage in direct action in support, forcing politicians to  take notice.

The success of AOC and her allies in smashing the boundaries of the prior Overton Window has engendered a furious backlash—both from Republicans and corporate Democrats—to marginalize proposals for a Green New Deal, higher taxes on the wealthy, and Medicare-For-All and squash the Overton Window back into its former narrow limits. Fox News and other right-wing media have launched daily attacks on AOC, which may backfire by making her even more prominent.

Centrist Democrats have tended to be patronizing and dismissive. Sen. Diane Feinstein essentially told a group of high school and middle school students visiting her office to lobby for the Green New Deal that they were ignorant and naïve and should wait until they’ve been in politics as long as the 85-year old Senator before lobbying for their views.

When asked about The Green New Deal by Politico, Nancy Pelosi dismissed it as “the green dream, or whatever they call it.” She refused to form a House Committee to study detailed proposals for implementing a massive response to climate change.

But once The Overton Window has essentially been broken, or more accurately, expanded, it’s not likely to return to the prior status quo anytime soon. Support for proposals like The Green New Deal, Medicare-For-All, and the wealthy paying their fair share of taxes is likely to expand in the next few years.

While most members of Congress, with their fat checks from rich donors, don’t currently support these proposals, they are surprisingly popular in the country. In a recent Harris poll, 59 percent of registered voters (including 45 percent of Republicans and 60 percent of Independents) supported a 70 percent tax on incomes over $10 million. A Kaiser Family Foundation poll found that 56 percent support the concept of Medicare-For-All. A George Washington University poll found that 80percent of voters support the concept of a Green New Deal, although in other polls support was substantial, but lower, when costs were factored in.

Support for big and bold proposals like The Green New Deal, Medicare-For-All, and higher taxes on the wealthy has expanded at astounding speed, breaking the Overton Window. That doesn’t mean they will all be enacted as rapidly. But the potential for major social and economic change over the next few years has grown exponentially. In 2020, the debate will be about how big to go in combatting climate change, how high taxes on the wealthy should go, and whether Obamacare should transform into Medicare-For-All.

AOC and her allies have succeeded in vastly expanding the terms of the political debate for the foreseeable future, blowing open the Overton Window, and putting big, bold ideas squarely on the table.