The 2018 election is blue wave with a harsh red undertow. First, the wave: Democrats took the House, moving towards flipping over 30 seats, took seven gubernatorial races and counting, and made significant gains in down-ballot races –winning over 330 state legislative seats, six state legislatures and breaking 4 GOP supermajorities, with more victories to come. 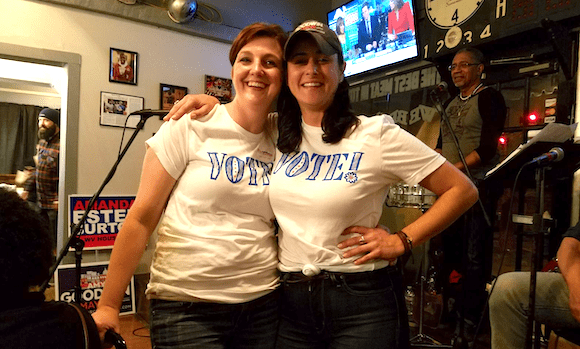 But the red undertow gives Republicans a larger majority in the Senate – with Republicans consolidating their hold on conservative, largely white and rural states. Transformative Democratic candidates – Gillum in Florida, O-Rourke in Texas – made stunning runs, only to fall short by the smallest of margins. Stacy Abrams' historic race for governor in Georgia remains too close to call as this is written.

Trump’s manic, unhinged, dishonest and scurrilous campaigning insured that he would be, as he put it, “on the ballot.” No doubt his blend of hate and fear helped build Republican turnout.

His results were decidedly mixed. He surely aided Democratic takeover of the House, while helping Republican victories in the Senate. Hand-selected candidates like the scabrous Kris Kobach in Kansas lost, as did Scott Walker in Wisconsin, Teflon no longer.

Progressive progress at the state and local level got less attention in early returns, but this is where the growing thrust of progressive energy is its strongest. Take Action Minnesota not only helped elect Ilhan Omar to the Congress and Keith Ellison statewide as Attorney General, it also helped Angela Conley become the first African American on the Board of Supervisors in Hennepin Country, Minnesota's largest and most diverse, with a budget of $2.4 billion. Door-to-door organizing by progressives helped break the GOP supermajority in North Carolina's Senate and House, and elected grassroots champions to represent South Philadelphia and Pittsburgh.

Democrats flipped the Colorado and Maine Senate, the New York Senate and House, the New Hampshire Senate and House. Democrats, fueled by the energy of grassroots organizing, now are in full control in New York, Illinois, Colorado, Maine and New Mexico. These “laboratories of democracy” can now begin to forward progressive alternatives on everything from money in politics to climate change.

Similarly, across the country, progressive ballot initiatives fared well. Voters in Arkansas and Missouri – Arkansas and Missouri!! – passed increases in the minimum wage. Michigan passed Automatic Voter Registration, Maryland same-day registration.The most dramatic victory came in Florida, where voters restored voting rights to ex-felons who had served their time, restoring the right to vote to an estimated 1.4 million citizens.

Turnout was dramatic. Exit polls, which surely will be revised, reported that 29 percent of the electorate were people of color, a new midterm record. Women constituted the majority of voters and voted overwhelmingly for Democrats. Over 2/3 of voters considered the economy excellent or good (up from little more than one-third 2 years ago), yet Republicans still fared poorly. Independents went to Democrats dramatically (55-41 in the ABC exit poll); Trump won them in 2016 and Republicans in the 2014 midterms. The Democratic margin among young voters – 18-29 –was almost double what it was for Clinton in 2016 and three times the margin for Democrats in 2014. Similarly college educated white women who favored Republicans in 2014 voted dramatically for Democrats (61-38 in the ABC exit poll)

Republicans are increasingly the party of rural, white, non college educated males, aging, and evangelical voters. Democrats made dramatic advances in the formerly Republican suburbs, and in the Midwest while continuing to gain in the Southwest.

Among Democrats, the votes hadn’t even been cast before the Wall Street wing of the party was declaring victory, arguing that Democrats had won with moderates and veterans able to appeal in the suburbs, suggesting a rerun of the Clinton strategy in 2016.

The reality is that progressives made remarkable advances over the past two years. In the Senate and in the new Democratic majority in the House, progressives will drive the agenda.

Divided control in Washington means little will get done, particularly with a president more interested in sowing division than in developing policy. Virtually anything Democrats pass out of the House will die in the Senate. The key for Democrats will be to use congressional hearings and reform legislation to frame a clear choice for Americans headed into 2020.

That means less focus on Trump’s various corruptions – people know he’s scoundrel; they just think he’s their scoundrel – than exposing the predators ball in Washington. More attention must be paid to how entrenched interests and big money have used the Trump administration to rig the rules in ways that hurt working people – rolling back worker rights, trampling environmental protections, fleecing students and consumers. And it requires using hearings and legislation to show in key areas – Medicare for all, tuition free college, rebuilding America green, criminal justice and immigration reform, anti-corruption legislation and more – that there is an alternative.

Trump dubbed himself the “magic man,” the day after the election. Con man would be more accurate –and Americans are increasingly not falling for the scam. The 2018 election exposed once more how divided the country is – but it also showed how strongly the tide is running against Trump’s hateful brand of politics and the party that he continues to deform.