In August, People’s Action held our first-ever Gender Justice Restorative Retreat. This initiative created a space for women and non-binary from all walks of life and all kinds of issue-based campaigns to be together, to celebrate one another, to heal, and to learn collaboratively. Emma Lockridge, Mary Spaulding, and Chloe Lacasse are three organizers and advocates from People's Action member organizations who attended this retreat, after traveling from across the country.

With the most important midterm elections in a generation upon us, I asked each of them why gender justice matters this election. Here’s what they have to say.

Emma Lockridge is from Detroit, where she has been fighting the Marathon petroleum refinery, a major source of pollution in Michigan’s most polluted zip code. She is an environmental justice organizer for Michigan United, a coalition that works for justice for all people. 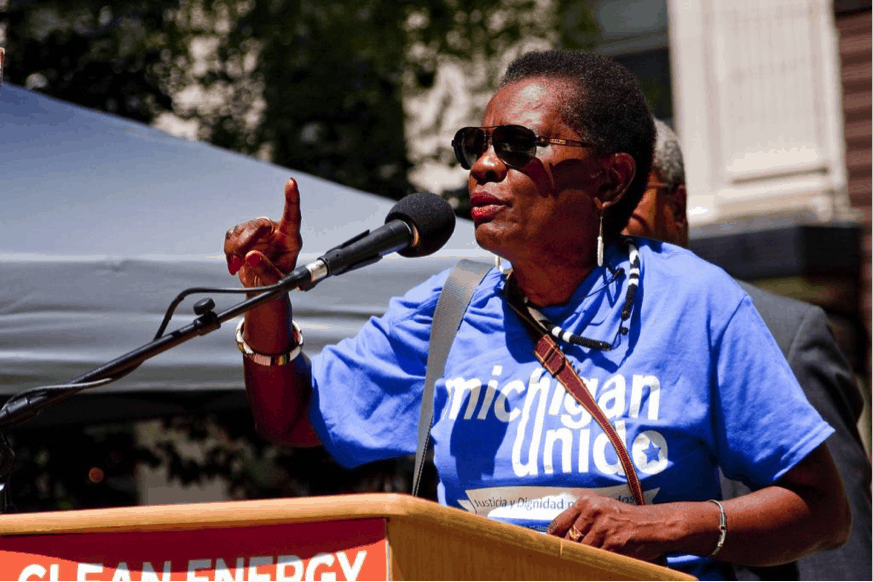 I’m a baby boomer. When I was growing up, America was a place of hope. The story that was put out there was that America was a great, welcoming place to be. Despite the hardship of the civil rights movement people still felt like America was great in a lot of meaningful ways. That’s what love is — feeling like everyone wants to be with you.

But that was in the past. Now, people want to come to the United States, but they certainly find that it’s not welcoming. Hearing stories of immigrant children being abused and sexually assaulted is horrifying. And very week, there is another story about Black people being murdered or trans people being attacked. We’re at a point now where we expect something bad to happen.

The future is in our hands to change that. A part of that change comes through voting.

When people vote, I want them to think about how their candidates rank in terms of environmental justice. I want to ask them whether their candidates fights for clean water, air, and land. Whether they feel a duty to protect the planet and their people. I’d hope that these candidates think about children and elders in terms of care. We need to put people in office who are concerned with affordable childcare and elder care. The average person grows up having to take care of their children and their parents. And these people are often women.

In this country, Trump has made it clear that he wants gender to be a reason to discriminate against women and LGBTQ people. He has made it seem like a detriment to a person’s success. What I know is that gender will propel us. Because women have organized at the highest level despite their barriers. Women’s organizing has been foundational to all movements. And on top of that, we organize with love.

And love looks like hope for me. I hope for sweeping change. This is our chance to show people this current reality is not who we are — at the polls.

Chloe Lacasse is a trans woman and former leader in the Freedom New Hampshire campaign, which passed the historic trans non-discrimination bill in New Hampshire in July of 2018. She is the media production coordinator at Rights and Democracy New Hampshire, an organization that builds healthy communities and real democracy. 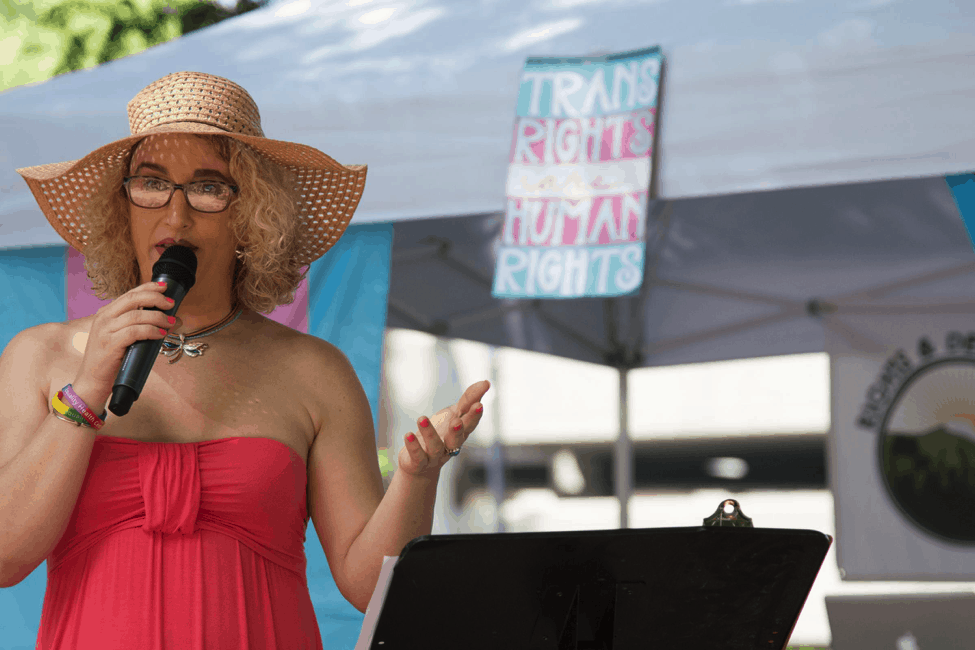 As a trans woman, I’ve experienced gender-based discrimination and transphobia personally. I’ve witnessed trans friends lose jobs and be denied housing for simply being who they are. And where state-by-state legislation is a solid starting point, our need as transgender Americans is a federal government that seeks to lift us, not delegitimize or erase us.

In less than 24 months, the current administration has placed the entire American LGBTQIA community in its crosshairs. From a Justice Department that routinely argues that one person’s religious beliefs gives them the right to discriminate and deny our existence, to a President who seeks to ban our brave service members simply because they’re transgender.

The onslaught of anti-transgender rhetoric hit a new low this October when it was announced that the administration has doubled its efforts to erase trans Americans by rewriting the definition of gender  in federal civil rights laws. Upending the growing line of federal courts recognizing that anti-trans discrimination is a form of sex discrimination.

Oppression of gender expression extends far beyond discrimination;it opens the door to poverty, sexual violence, segregation, inequality, and even threats to our lives. Attempting to suppress any women’s voices doesn’t just affect us, it affects our entire society. And on this path forward, we must use our collective experiences and strengths to help reach those still in the dark.

Gender justice serves all communities. No matter our race, god, orientation or identity; gender justice is the bridge across the great divide. When we see in one another our shared struggles and vulnerabilities, a shift happens. Suddenly that stranger we may have feared or reviled comes into focus. It exposes a mirror in which we get to see ourselves in them.

At our core, what we need as advocates is continued education and limitless empathy. To feel and understand another’s struggles is to see those struggles in ourselves. The awakening has begun. Our voices in harmony. And we will not be silenced any longer. 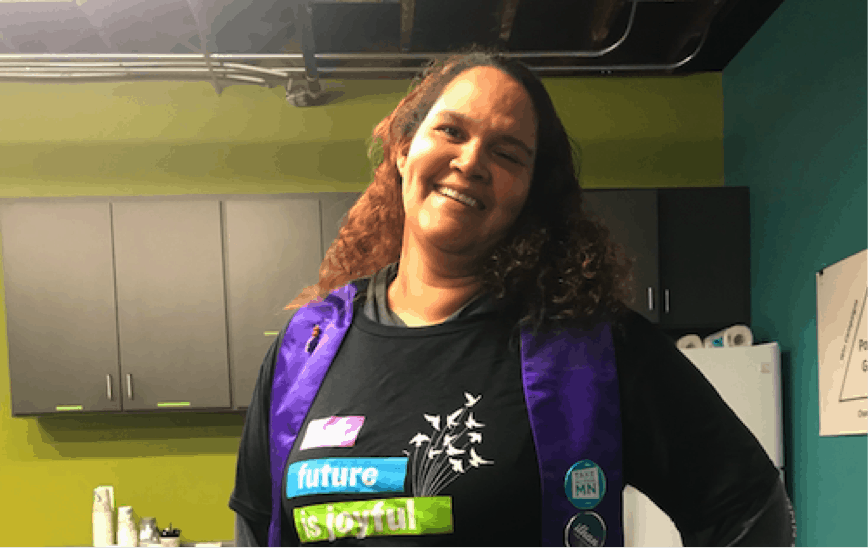 I was exposed to voting early because my mother always took me and my sister with her to the polls. She taught that it hasn’t even been a century since women got the right to vote, and that’s why I should always exercise my rights. Even as a teenager, I was so excited to come with her.

Now that I’m a mother, myself, I am carrying on that tradition and teaching my children the importance of voting. I tell them that voting is about having an opinion that is about your future; you have to always make sure that you actively shaping your future.

Since Trump was elected, I’ve seen more and more how important voting is. After all, many people voted for Trump despite his bigotry and narrow-mindedness. In fact, more than half of white women voted for Trump. In this midterm election, voter suppression is hiked up in order stifle the vote of Native voters, Black voters, and immigrants, and that’s unacceptable. Just decades ago, Black women worked to register voters in highly dangerous circumstances.

You would assume that people would vote because it’s natural. But the reality is that so many people feel powerless. The system discourages them from understanding their power. I, myself, had been trained to doubt my own opinions as a woman. When I was asked to organize with women of color in Minnesota, I wasn’t sure I could do it. And now I help run a transformative program that has begun taking on national proportions.

We have to understand that when we vote, we vote with our whole selves. And so often, our society breaks people down to the point where they can’t be their full selves. They feel like there’s no point in them speaking up. That is a symptom of a society of exploitation.

The reality is that gender justice allows all of us, not just women, to be our full selves. And that allows us to demand the best health care, pay equality, climate justice, and alternatives to incarceration.

When people are doubtful of whether they should vote, I ask them: Who is one person in your life that deserves a better future than what we have right now? Go vote for that person. Go vote for your younger self.

Go vote for people who you know can’t vote, and want to vote.