A wave of bold women candidates are transforming politics in Pennsylvania: from Jess King, the Lancaster County Mennonite who’s running for Congress, to Kristin Seale in Harrisburg, Danielle Friel-Otten in Chester County, Sara Innamorato and Summer Lee in Pittsburgh, and Elizabeth Fiedler, who’s running for State House from South Philadelphia.

Bold women are also running these campaigns, transforming the Democratic Party from within, and preparing a new generation of activists to play a leading role in state politics in years to come.

Adam Kruggel from People’s Action caught up with two of these women of vision: Kelly Morton and Amanda McIllmurray, both founding members of Reclaim Philadelphia. This grassroots group, created by alumni of the 2016 Bernie Sanders campaign, has in two short years grown into a formidable force that is changing the way politics are done in Pennsylvania, up and down the ballot and all across the state. 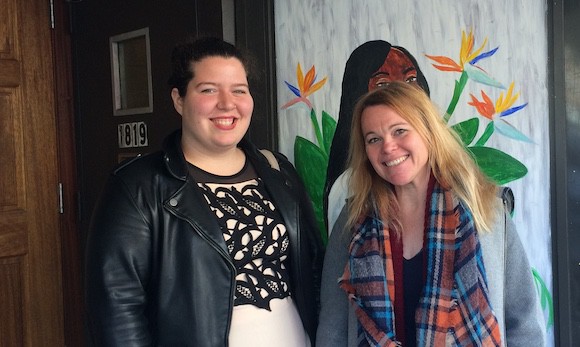 OF:  Women in Pennsylvania are running some of the most dynamic campaigns in the country - both as candidates and as campaign managers. Tell us more about what is driving such powerful leadership.

AM: Nationally, people are really reacting to the fact that our government does not have representation of women right now. Women are performing really well at the polls, which is super-important, but we also need to make sure that the people we elect - regardless of gender or race - are preaching a politics of the people. We are running women, people of color, and people who speak out about our everyday struggles. And they don’t just talk about it - they speak from lived experience. That’s why people are getting so excited.

KM: I see all of these amazing women movement candidates that are coming up - women are jumping to the place of navigating, and are definitely excelling at this. But I also think of all of the amazing women organizers - Amanda and myself included - who are able to train canvassers, train candidates, train organizers and talk about the hopes and vision we have for the world, and what we are willing to do to make that happen.

OF: It has been inspiring to watch your work in Philadelphia and across Pennsylvania leading up to the November 6 elections.  Tell us about what’s happening here.

KM:  In the primary season, as the chair of the Democratic Party Transformation Task Force at Reclaim Philadelphia, we reached out to people who wanted to get engaged in the political process. We recruited them to run for committee person, which is the lowest level of elected office.  Basically, you become the representative for the Democratic Party in an area that is about five blocks surrounding your home.

These two wards are in South Philadelphia, which is also where Elizabeth Fiedler won her primary campaign for the State House. A lot of the conversations I was having with people at the time were about something I care about a lot, how we need a different kind of Democratic Party.

OF:  How is the type of canvassing and engagement that you are doing different from conventional party politics?

KM:  In the two wards where leadership has changed, there is now an entirely different approach to what it means to be a committee person, and what it means to have ward power. From our perspective, that is more about getting out the vote, than about greeting the vote when it arrives to you at the polls. So we are having very relational conversations, engaging people who previously would just have had a sample ballot handed to them on election day.

This kind of deep canvassing has been happening for months, and all of these committee people have been deeply engaged and recruiting volunteers. Through this, we have gotten hundreds of new volunteers from the doors. We have also gotten local businesses involved, and it has really created an idea of having a unified spirit of getting the vote out that is so much more human and powerful than what had been there before.

OF: What is the impact that these efforts are having?

KM:  The committee person project, coupled with the Fiedler campaign, have completely shifted the political landscape of southern Philadelphia.  For a wide swath east of Broad Street, there is a complete shift. One of our leaders just commented to me the other day that it is hysterical to walk around south Philadelphia - because there are clipboards and people canvassing everywhere.   We have gotten people engaged - and these were people who had never canvassed before, and now they know that yes, this is actually doing something, and this is something that they want to do.

It has been a major shift in the political landscape, and a major rejuvenation. Right now, we have 31,000 doors knocked and we are heading into the GOTV weekend. It is completely volunteer-led, and we have filled more than 532 volunteer shifts. This is crucial for us, and everyone that we know who is volunteering with us has a clear understanding of their stake in the game and their self-interest.

OF: The strength of Elizabeth Fiedler’s candidacy for the Pennsylvania State House has surprised a lot of people, and she is part of the wave of women candidates who may transform Pennsylvania’s state legislature. Why has her campaign been so successful?

AM:  I was the campaign manager for Elizabeth Fiedler, who is an amazing Reclaim Philadelphia leader who’s running for the State House from South Philly.  Overall, we knocked on 53,000 doors in the primary and raised $165,000 from more than 1,000 individual contributions. Every step of the way, we had people tell us that you cannot do it this way - and we said we think that we can, and we are going to try.

Elizabeth would knock on doors and talk to voters every day, and we would talk to people who typically wouldn’t vote for a candidate like her. She really shifts the narrative so it isn’t left versus right, but bottom versus top.

Our district is very diverse – it’s 60 percent white, but also 12 percent Asian-American, 20 percent Black, 15 percent Latinx and very economically diverse.  We took that as an opportunity to build bridges between communities and get people to see that their struggles are in solidarity with each other. We talked to long-term white residents of the community about how it’s not new Mexican immigrants that are causing problems - it is Comcast and the other big corporations that are not paying taxes, and that if we are able to shift things, we can have a South Philadelphia that works for all of us.

We built that narrative throughout the entire campaign with everything that we did. We also got our volunteers to think about what long-term political struggle would mean. We got them to think about their personal stake, not just us as a campaign coming in and saying you need to knock on every single door and we are going to burn you into the ground, which is what campaigns typically do for better or for worse, and which may be necessary in some cases.

I live in the district, and have been organizing there for years. Elizabeth also lives in the district and has been deeply rooted there, so we saw this as an opportunity to really build our community - win or lose. We talk with every single volunteer about what their stake is: are you struggling with health care, does your kid’s school have enough funding? We get them to talk about the root causes of these issues on the doors with voters, and bring their personal stories into it.  We also talked with them about running for committee person - so they also had a deeper stake in knocking on more doors, because many of them were also up for election. So when they were on the doors campaigning for Elizabeth, they would also talk about their own candidacy for committee person - and that is how we were able to win enough seats to take over several wards in South Philly.

In her primary, Elizabeth won 51 percent of the vote in a four-way race, against the strongest political machine in Philadelphia, that doesn’t just control power in the city but in the entire state.  We did this with everyone telling us that it couldn’t be done, and we shouldn’t even try.

So we see all of these dynamic, multiracial women winning primaries all across Pennsylvania, with really solid left politics. But they were not going around saying, “I am the most progressive candidate” - they were saying, “Politics is broken - it is not working for us.” They were saying that is probably by design, and here is a way we can fix it: by not taking money from corporations or special interests, making sure we are actually talking to our constituents, and prioritizing their needs and the needs of working people over the needs of the wealthy few.

OF:  In a short period of time you have made tremendous gains in Philadelphia and all across Pennsylvania. What is your plan for building long-term governing power in the city and state?

AM:  My vision is that within the next ten years, we will have a Pennsylvania, and its politics, that are run by the people.  The 2019 Philadelphia City Council election will be instrumental in that. Right now, we are looking at endorsing a slate of movement candidates for the 2019 election and working with labor and community organizations so we can have a massive victory for the people, and have a People’s City Council in Philadelphia.

This is similar to what we did with Larry Krasner’s campaign for Philadelphia District Attorney: we brought together a broad breadth of people with labor and community organizations united in analysis, strategy and tactics. Ultimately, I would like to see us win elections up and down the ballot, and I want us to control local governments all across the state - the State House, the State Senate, and the Governor’s seat within the next ten years.

This is an ambitious vision, but entirely possible based on what we are doing - because there are amazing people all across the state organizing who share our frame of mind, analysis and our values. You have Lancaster Stands Up in Lancaster County, Keystone Progress in Erie and Coatesville, Pennsylvania Together in a lot of small towns all over the state, and Reclaim Philadelphia has just expanded to Delaware County.  We now have a shared vision of people-powered politics all over Pennsylvania.

A lot of work is focused on transforming the Democratic Party, because that is the power structure that currently exists. Once we have people who share our values and our vision in the state party structure, we can have a Pennsylvania that works for all of us, that isn’t leaving people out, that isn’t telling schoolchildren that their lives don’t matter because we are underfunding their schools and then sending them to prison.