It Takes a Village to Make a Hate Crime

Saturday morning, a gunman killed 11 Jewish people who were worshiping at the Tree of Life Synagogue in the Squirrel Hill neighborhood of Pittsburgh. The gunman stated his reasons on social media before his attack: “his people” were “being slaughtered” because a Jewish organization was “bringing in hostile invaders,” a reference to their support for refugees.

This is reported to be the worst attack targeting Jews in United States history.

Almost exactly a year ago, I wrote that the rise of Pennsylvania’s racist right is a warning to the nation. Today, as I learn about these events just an hour's drive away, I find myself in an all-too-familiar state in the face of such an abomination. As the details roll in, I feel a terrifying worry for friends, anguish at the sheer brutality of the attack, and anger at the assailant and all of the people who were complicit.

But as the suspect’s motivation became clear, I found some answers to those questions. 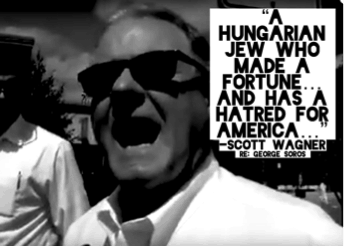 The assailant’s reasoning neatly mirrors the narrative Republicans have deployed ahead of the midterms. With a caravan of displaced refugees from Honduras making their way north to the U.S., right-wing media has been ablaze with hysterical concerns of invasion.

Scott Wagner’s campaign for Pennsylvania Governor has amplified this thread: 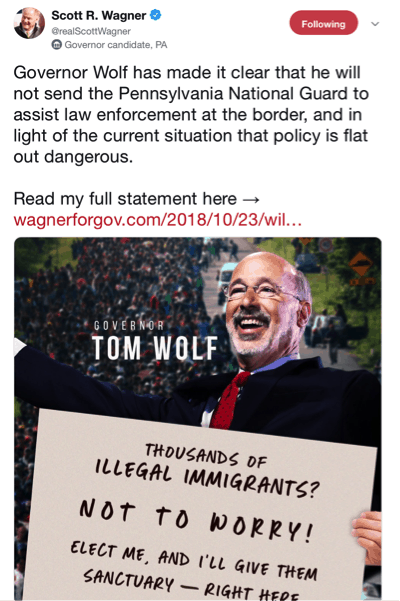 Rush Limbaugh and right-wing agitators on Fox News question whether the caravan of refugees, fleeing conditions of violence, is some kind of manufactured and orchestrated conspiracy. President Trump himself echoes this theory. Oh, and to be clear, Glenn Beck is on record saying it was George Soros, specifically, orchestrating and funding the refugees.

For his part, Scott Wagner has publicly called Soros a “Hungarian Jew” who has a “hatred for America” and has alluded to him as a distant, menacing, conspirator in Tom Wolf’s reelection bid, making a starkly naked anti-Semitic evocation of Jews as manipulating world affairs.

How Could Somebody Feel So Much Hate?

It truly takes a village to create a hate crime, and it is abundantly clear that the suspect in Saturday's attack got all of these messages loud and clear from right-wing media and candidates. Because Robert Bowers felt so much urgency and fear about a hostile invasion, orchestrated by Jews, he went to a local synagogue and killed as many as he possibly could.

This atrocity is unconscionably brutal and disgusting as a discrete, horrific event. It leaves us with a sense of utter devastation for those who were lost, concern for those who loved them, and a sense of futility at its terrible finality for those innocent lives.

I would suggest we should reserve anger and action for those who pushed the stories of invasion and conspiracy that Bowers took both seriously and literally. President Trump and the Republican Party, in deploying strategic racism, demonstrate sheer contempt for all voters, and their need to hide the effects their policies have had on the people.

We have less than ten days until an election - and the only cure for futility is action. There are no shortage of opportunities to stand up directly people like Scott Wagner, who peddle in hate and xenophobia.  It is not hyperbolic to say that "leaders" like Wagner are Fascists, both in rhetoric and in policy. It is the responsibility of all who want democracy and freedom to survive in this nation to vote.

Every person has the capacity to reach out to their neighbors with good candidates, or with grassroots groups like Keystone Progress, Reclaim Philadelphia, Lancaster Stands Up, the 215 People’s Alliance and other People's Action groups across the country to make an impact on this year’s election.

There are more of us than there are of them. And while some may argue that we should not politicize this event, it’s exactly because the event is explicitly politicized by the killer’s intent that we must take a stand, politically, right now.

One year ago I wrote, "Join us in believing that the people of our commonwealth will come together in 2018 to reject hate, and elect leaders who work for all of us." The time to act is now: we must vote.

But there’s more that we must do: even if we strike a blow against fascism at the polls, Donald Trump will still be President of the United States on November 7. We must work together to hold even the best new leaders accountable. Beyond that, each of us can work to challenge the poisonous right-wing narratives that fill the air around us.

The right has developed a profoundly powerful propaganda machine, and many of us have given up on trying to engage with those who subscribe to it. It may be time to try again - because the evil and absurdity of all this has just been laid bare. Conspiracy theories about invasions and Jewish ringleaders aren't just harmless, idle talk. People died because of this. And unless we can bring our friends and neighbors back to reality, it will happen again.

Lastly, each of us has the power to reflect on the hate within ourselves. Robert Bowers’ psyche was deeply ensconced in the hateful rhetoric of these fascists, but anti-Semitism, white-supremacy and xenophobia are central through systems and structures across our society.

So it is impossible, even for those of us who can identify this strategic racism for what it is, to escape the grasp of these oppressive forces within ourselves. Those kernels of hate find their way into both the hateful and the hated. for us to build the power we need we must engage in the hard work of identifying and overcoming its manifestations within us all.

The good news is we don’t have to do this alone. In fact, we must rely on our deepest relationships with others, because it is hardest to see yourself. Only when each of us is committed to ending hate, inside and outside ourselves, will we never again see the horrors that we have today.