The EPA Doesn't Give Equal Protection to All

Trump mesmerizes with TV sideshow. Axios: "Trump is finally fully merging his presidency with television, relishing the mounting amount of time that he's devoting to filling the airwaves. What things that actually matter are being ignored as our attention is monopolized by visits to the White House by Kim Kardashian, Kanye West and Kid Rock? Here are just a few of those issues: The allegation that Saudi officials murdered Washington Post opinion writer Jamal Khashoggi. Trump has said little. Jared Kushner, who burnished the image of Saudi Crown Prince Mohammed bin Salman, has remained silent. Large legal clouds, including the Mueller investigation. Midterms that could radically change life inside the White House. Mounting national debts, and no prospect of the White House working with Congress to reverse them."

GOP Candidate for Georgia Governor Commits Massive Purge of Registered Voters. Common Dreams: "As Georgia's Democratic candidate for governor, Stacey Abrams, called for voters in her state to fight Republican efforts at voter suppression by showing up at polls in large numbers in next month's election, a national grassroots group reported Secretary of State Brian Kemp—also the GOP's gubernatorial candidate—to the Justice Department late Wednesday night for blatantly violating the Voting Rights Act in order to swing the upcoming election in his own favor. The Democratic Coalition is among those that have expressed outrage over a massive voter purge in the state which has disproportionately affected black voters, just before residents prepare to choose between Abrams—who would be the country's first black female governor—and Kemp himself in the November 6 election."

Gov. Walker of Wisconsin trails in re-election bid. NBC: "Republican Gov. Scott Walker of Wisconsin is behind by double digits in his re-election bid, while Democratic Sen. Tammy Baldwin is comfortably ahead in hers as a near majority of likely voters say they prefer Democrats to control Congress, according to a new NBC News/Marist poll of the state. In Wisconsin’s race for governor, Democratic challenger Tony Evers gets support from 53 percent of likely voters in a head-to-head matchup, while Walker gets 43 percent. Among the larger pool of registered voters in the state, Evers’ lead is 9 points, 52 percent to 43 percent — down from his 13-point lead in July’s NBC/Marist poll."

Ross now recalls conversations with Bannon, Sessions about citizenship. Politico: "Commerce Secretary Wilbur Ross now recalls conversations with former White House chief strategist Steve Bannon and Attorney General Jeff Sessions about adding a citizenship question to the 2020 Census, according to a court document filed Thursday. The recollection is the latest twist in litigation over the Trump administration’s decision to ask about citizenship in the decennial census. The administration contends it needs citizenship information to better protect the rights of minority voters, but opponents argue it will depress the count in immigrant households, which will result in fewer federal dollars and diminished political power. A Manhattan-based federal judge in September ordered Ross deposed to answer questions related to the intent of the citizenship question, but Supreme Court Justice Ruth Bader Ginsburg temporarily froze the order Tuesday following an emergency request from the Justice Department. Plaintiffs in a pair of related lawsuits over the question have sought more information about why the administration decided to include it on the Census."

Steve Mnuchin And Big Bank CEOs set to Aattend Saudi Conference despite journalist’s disappearance. HuffPost: "Even amid reports that agents for Saudi Arabia’s Crown Prince Mohammed bin Salman brazenly killed a Saudi journalist working for The Washington Post, some of the world’s richest and most influential business, media and political figures still plan to attend a Saudi-sponsored schmoozefest in Riyadh this month. U.S. Treasury Secretary Steve Mnuchin, JPMorgan Chase CEO Jamie Dimon and International Monetary Fund Managing Director Christine Lagarde plan to attend the event, the second annual Future Investment Initiative, scheduled for Oct. 23 through 25. It is a government-backed conference bankrolled by the country’s sovereign wealth fund. On the agenda at what has been dubbed Davos in the Desert, after a similar gathering of elites every winter in Switzerland, are the sorts of topics beloved by the globe-trotting superrich. “Investing in transformation,' 'technology as opportunity' and “advancing human potential” are listed as the conference’s broad themes. The real attraction, to be sure, is the promise of lucrative deals with the Saudi government."

The EPA Doesn't Give Equal Protection to All

If there's one thing "EPA" doesn't stand for, it's Equal Protection for All. Too many communities of color, like North Birmingham, Alabama, are threatened by toxic chemicals in their soil and water, and the EPA doesn't offer them the protections they are entitled to by law. Then instead of fixing environmental problems, they blame the victims. 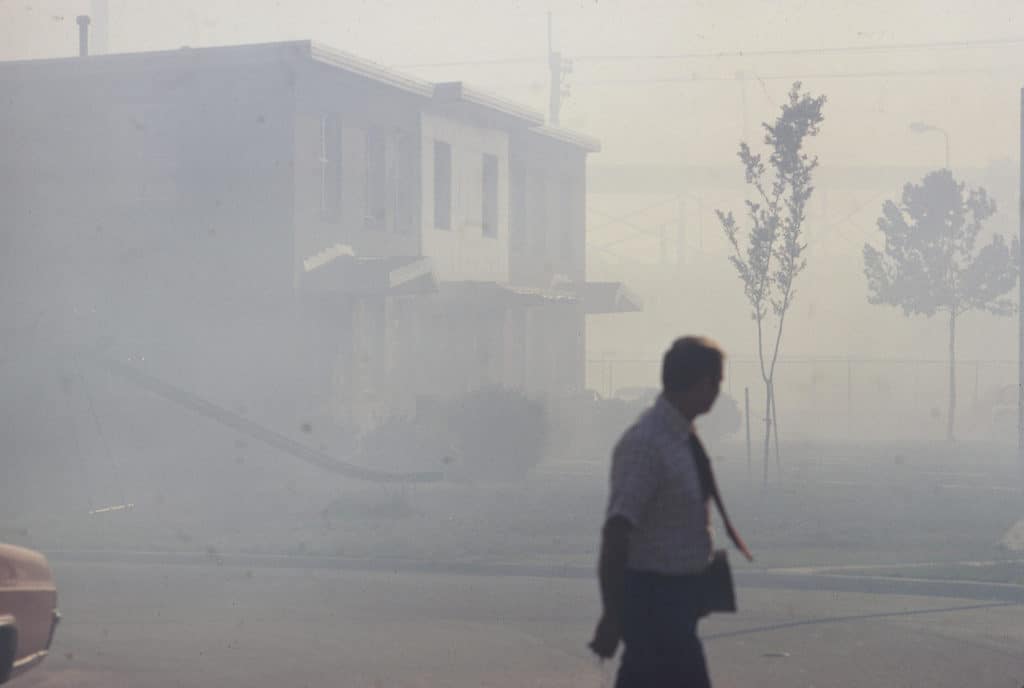 Charlie Powell in Birmingham, Alabama has waited since 2005 for action from the Environmental Protection Agency (EPA). Instead he gets the runaround. Why? Because he and his neighbors, like so many other communities we work with, they are poor and African American. They have the wrong complexion for real protection.

Instead of stopping toxic air emissions from an industrial coke plant or properly cleaning up the contaminated soils throughout the community, EPA and health authorities gave each family a piece of paper. It included a list of things they should do, not the polluter, to avoid exposures to chemicals in their air and backyard soils.

“Undress the children at the doorway so any chemical that gets onto their clothes and shoes will not be tracked into the home."

Really. Every teenager wants to strip down to their underclothing at the front door in front of their brother, sister and entire family.

If you are a vulnerable person like a pregnant woman or asthmatic child, the recommendation was, “don’t inevitably breathe the air or come in contact with the soil.” I guess that means hold your breath while outdoors.

EPA’s also concluded that “past and current exposure to arsenic found in surface soil of some residential yards could harm people’s health. Children are especially at risk.”

Now if this was a white, middle- or high-income neighborhood, do you think that the actions or lack of them with such strong health risk conclusions would be treated the same? I don’t.

The site consists of an area of lead, arsenic, and benzo(a)pyrene (BaP)-contaminated soil from multiple possible sources, including nearby facility smoke stack emissions and coke oven battery emissions, as well as from possible flooding along Five Mile Creek.

Clearly, the North Birmingham community has the wrong complexion for protection.

But they are not alone. In Uniontown, Alabama, a very similar story is playing out.

Uniontown is 30 miles west of Selma, and is home to families that are 84 percent African American, almost half of whom live under the poverty level. Despite its proximity to a town famous for its civil rights marches, families still feel very much tied to its past.

Many residents know which plantations enslaved their great-grandparents, and people as young as 50 remember growing up with sharecropper parents and no running water or toilets. Uniontown’s polluters include a massive landfill next to the historic black cemetery that started accepting coal ash after a spill of the waste in Tennessee.

There’s the pungent odor from a cheese plant that has released its waste into a local creek and then there’s the waste water from the catfish processing plant, which contributes to an overwhelmed sewage system that spills fecal matter into local waterways.

People are afraid to drink their water.

A local farmer, Alex Jones, takes people on a tour pointing out the runoff from the cheese factory. “See that, that looks like a lake, it’s runoff.” It’s not only ugly but stinks. A leader of a Riverkeeper group described it as, “one of the worst smells ever. The smell is so putrid you immediately start dry heaving. It makes your body involuntarily try to throw up.”

Again, this would not be the situation in a middle class, higher income area as they have the complexion and income for government's protection.

When asked why the families don’t move away from Uniontown, Phyllis from the local community group Black Belt Citizens said, “We don’t give up because the end result is to run us off the land and make the entire community a landfill. So what are your choices?”

The American Public Health Journal study published in April found that black people are more burdened by air pollution than any other group, even when taking poverty into account. And the agency has taken years or even decades to respond to all complaints.

EPA has faced criticism on civil rights issues around a number of contaminated sites in the state. Earlier this year, the agency denied Uniontown’s environmental racism complaint.

Today with the hurricanes and associated record rains, innocent families across the south will be in more danger than ever before from widespread contamination from coal ash, industrial run off, pig manure, and yes, even putrid smelling cheese factory waste. Such communities need protection that is equal to that of white and higher income families.

Water doesn’t stay still. Air doesn’t stay still. Nor are the families in contaminated communities willing to stay still. They are fighters as they have everything to lose - their land, their health and the future for their families. I’m proud and honored to stand with them and continue to fight for justice and invite you to join us.