Kavanaugh and the Confirmation of Third-Branch Bias

Is there anything left in GOP politics that doesn’t involve sex? If you ask Lindsey Graham, the “single, white male from South Carolina [who] will not shut up,” or Orrin Hatch, the tone-deaf octogenarian who knows an “attractive” and “pleasing” victim of sex abuse when he sees one, it seems not. 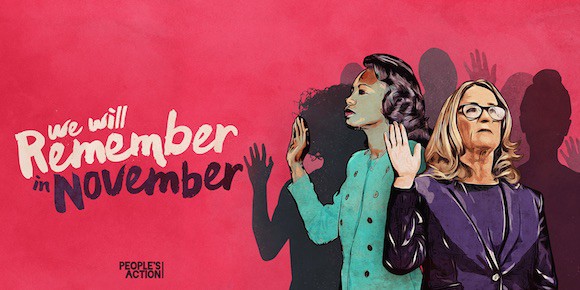 Congress has long buried its head in the sand when it comes to women’s issues. But in the fight over the Supreme Court nomination of Brett Kavanaugh, these issues were unavoidable.

If anyone thought Washington was devoid of leaders or heroes, they need look no further than Dr. Christine Blasey Ford. Lacking any discernible motive and with no interest in getting involved, the California professor - who goes by Christine Blasey in her academic work - subjected herself to loaded-for-bear questioning by the Senate Judiciary Committee.

During her almost four hours of testimony, Democratic senators on the committee sought to score political points by lobbing her softballs. Republican senators, meanwhile, hid behind a cold-and-calculating Arizona prosecutor (in what wasn’t a criminal proceeding) who sought, yet failed, to surgically slice holes in her memory and shred her credibility.

Despite Senator Grassley’s interruptions, Blasey calmly described in detail the scene of her assault – the bedroom, the bathroom and her escape. She explained her lifelong fear of confined spaces and her insistence on a second front door as part of a home-renovation project.

Through it all, Blasey stuck to the facts, often channeling them through her knowledge of neuroscience to explain why her most grotesque memories remained so vivid.

“Indelible in the hippocampus is the laughter, the uproarious laughter, and their having fun at my expense,” she told the Senators, looking into her lap. “I was underneath one of them while the two laughed. Two friends having a really good time with one another.”

The Republican senators gasped for air in the ensuing silence, surely calculating how Dr. Blasey Ford’s testimony would affect their prospects for reelection, and the number of women’s votes they were losing by the minute.

Who came next was intended to right the ship. Or so the Republicans hoped. But Kavanaugh couldn’t have created a starker contrast in his testimony. Where Blasey was cool and dignified, at times offering the prosecutor help and apologizing when she lacked complete answers, Kavanaugh was angry and belligerent.

Fidgeting with his cuffs, anxiously unscrewing the caps of water bottles and sniffling ceaselessly, Kavanaugh spent his first half hour railing against enemies seeking “revenge on behalf of the Clintons,” and he condemned unidentified “outside left-wing opposition groups,” promising “what goes around comes around.”

Considering Kavanaugh’s disposition, I wouldn’t want to represent the Democrat in next campaign-finance case that comes before the Supreme Court.

And Kavanaugh repeatedly disrespected Democratic senators - refusing to answer some questions and answering others in ways that strained credulity. He talked over Senator Feinstein and sidestepped Senator Durbin’s queries about whether he wanted the FBI to investigate. When Senator Klobuchar - the daughter of a ninety-year-old, recovering-alcoholic father who still attends AA meetings - asked him whether he had ever blacked out from drinking, he snapped, “I’m curious if you have.”

By the time the spectacle ended, it was no longer Blasey v. Kavanaugh. Nor was it was Republican v. Democrat. It was #MeToo v. Trump. But President Trump didn’t mind. Commenting on Kavanaugh’s enraged performance, he tweeted, “Judge Kavanaugh showed America exactly why I nominated him.”

Trump then attacked Democrats and others for offering Blasey’s allegations, branding Democrats “con artists [who] know it’s a big, fat con job,” and surmising that “they go into a room and I guarantee you they laugh like hell at what they’ve pulled off on you and on the public.”

But what if Dr. Blasey Ford’s story is true?

President Trump expressed no interest in finding out, insisting that he “won’t get into that game [because] these [allegations] are all false to me.”

When one reporter asked the president why he always gives the benefit of the doubt to the man in matters concerning sexual misconduct, he turned the topic to himself and quipped, “because I’ve had a lot of false charges made at me.” At least nineteen women have brought sexual-misconduct allegations against the president. The official White House line is that all nineteen are lying, and that when several recanted the media refused to cover it.

President Trump even sought cover by suggesting that George Washington, too, may have committed indiscretions: “[H]e may have had a bad past, who knows, you know? He may have had some, I think, accusations made. Didn’t he have a couple things in his past?”

Finally, President Trump and others aligned with Kavanaugh fussed that if decades-old allegations of sexual misconduct are given attention, then qualified men like, say, Roy Moore, will be afraid to subject themselves to the judicial nomination process.

First, Mr. President, that’s nonsense. Second, if you were so concerned, you should have nominated a woman.

Through his confessions and commentary, President Trump made clear that he cares far less for judicial temperament than for those who share his Trumpian temperament: an attitude that doesn’t care about whether Kavanaugh assaulted Blasey, or about the #MeToo movement.

This attitude was mirrored by each of eleven old, white Republicans on the Judiciary Committee who didn’t criticize Blasey’s testimony so much as they pretended that what she testified about never happened.

The hearings articulated what many of us already knew. Social scientists widely describe Trumpism as a backlash against social progress. Now, his bias has infected the judicial branch. For Trump, it’s about beating back the #MeToo movement in all three branches of government and keeping white men in power - never mind the truth.

Senator Graham certified this mandate when he proclaimed the plight of the single, white male who will not shut up. By painting himself as a victim, he sought to hijack feminists’ and progressives’ core argument, earned from hostile sexism and racism that he has neither experienced nor would ever want to. But honestly, no risk exists that white men will ever be silenced. They control virtually every walk of American life and largely decide who will join and succeed them.

Graham’s callous and contrived outburst was noteworthy for the confession that he didn’t intend. It wasn’t a rant about partisanship, or who deserves to be on the Supreme Court. It certainly had nothing to do with the truth. Instead, it ripped off the Band-Aid and exposed how badly the judiciary needs to be part of the #MeToo conversation.

In light of the FBI’s limited investigation, we’ll probably never know whether Blasey told the truth any better than we’ll know whether Kavanaugh did. More than seven hours of Judicial Committee histrionics produced little more than news clips of senators shouting past each other. The event was a choreographed circus that pitted raw chauvinism against honesty.

Let’s hope the truth prevails and our call to cure the more solemn issue of sexism is one that this President can’t shut up.