Hope, Votes and "The Politics of Joy"

As 2018 primaries draw to a close, People's Action Deputy Director of Movement Politics Laurel Wales sits down with Leigh Friedman to talk about grassroots candidates we've supported and the importance of what she calls "the politics of joy." This is part one of two.

OF: First, what are movement politics and how do they differ from a traditional approach?

LW:  Movement politics are about centering on people who have been impacted by decisions that get made at City Hall, in statehouses, or the halls of Congress, and making sure they’re stepping up to lead: organizing locally in their community around different campaigns, all the way up to running for elected office. 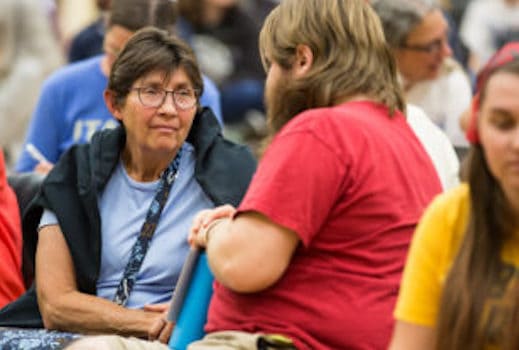 I’ve spent time with recently with our member organization Take Action Minnesota. They’ve really been pushing this idea of the “politics of joy.” I think this really resonates with what we’re trying to do: to bring joy back into our politics in this country. We’ve been driven by fear over so much over the last several years, and movement politics is really about imagining what is possible - what might still feel far away, but is achievable when we organize.

When I was growing up, the idea of democracy was one of the key things to be proud of about this country. Over the course of my lifetime, I’ve not seen that to be true, at least in the way everyday people feel about how politics happen to them. They feel it’s the same old, same old: big money wins, and typically white men in suits and ties are the ones we’re told we should be supporting.

For me, movement politics are really about bringing back our democracy in a way that feels meaningful, powerful, and accessible to everybody, not just the people who have the bandwidth to pay attention or the money to give. When we elect people, they’re supposed to serve everybody in the community, and that hasn’t been happening for a long time.

OF: What is the relationship between electoral politics and structural change?

LW: Electoral politics is the way that we push for and get the votes we need to pass legislation that changes structures. Whether that’s a bill relating to healthcare or housing or mass liberation, elected officials are the ones who can carry it forward and make sure policies get implemented.

Connections aren’t just confined to the electoral politics space, because you need the whole movement. When an elected official steps in the halls of power, they’re entering a world where everything has been said and done in a certain way for a long time. We need the movement to be there to agitate and hold them accountable, but also be there to support our folks when they’re going through hard times.

Yes, we need folks in office who will stand up for the hard things because they know they’re the right things, but we also need the folks in the street providing that heat, telling their stories and creating community connection. There’s no other way to move elected officials.

OF: Are there misconceptions you’re hearing about movement candidates this cycle?

LW: I have a heard a couple different things that I want to address. There’s this word — “viable.” That word gets used against women and people of color all the time to put them down and say they’re not capable of winning. That’s just not true — we’ve seen a wide swath of voters getting really excited about our candidates’ politics.

When I think about a candidate like Erin Murphy, who ran for a statewide race for her first time in Minnesota, she was completely seen as the underdog. Folks thought she wouldn’t get endorsed, that she would come in last, but she received the state party endorsement and came in second, with a strong 36 percent. To me, that shows we are building.

Second, the press often repeats the canard that the left is losing.In places like Iowa, Minnesota, Nevada, or Illinois, where we’ve had strong progressive candidates run for Governor and not make it past the primary, this is the message that gets spun and recycled.

I think this is incredibly wrong. When we’re running mostly-women, movement-backed candidates against candidates who have a lot of money and name recognition, those are two big hurdles to overcome. We’ve also seen some incredible victories. It’s really interesting to look at what’s happening in states that have been predominantly held by Republican control - Maryland, Arizona, Idaho, Georgia, Florida - all of these places propelled and pushed forward the most progressive candidate in the primary. All of them are people of color.

To me, this shows that when folks see the impact of bad elected officials, who don’t stand up for the people, the backlash is hard. Places where the Democratic Party infrastructure is maybe not as strong are the very places where true progressive candidates like Paulette Jordan or Ben Jealous or David Garcia get traction and win. Moving forward, this calls into question the role of the party as a gatekeeper.

I recently had a conversation with a staff member of our Michigan member organization, Michigan People’s Campaign. She was like, “Everybody was really excited about Abdul El-Sayed (who came in second in Michigan's gubernatorial primary). Now they all have to go and work for another Democrat who isn’t horrible, but isn’t as inspiring. How do I move my base to do that?”

OF: So how do we change the narrative?

LW: By doing. This year, if we fall into the trap of just going to the same moderate, middle-of-the-road voters, and only try to get them to vote our way but lose in the end, it’s fodder for the defeatists.

Across the country for primaries, voter turnout has been skyrocketing. In parts of Detroit they ran out of ballots, in Minnesota they had the highest primary turnout they’ve had in a decade or so. When I was working with our member organization in Nevada, the Clark County turnout was also really high. You can’t expect to take down the status quo in a year, but it’s clear the people are paying attention, they’re involved, they’re engaging, and more people are showing up in the middle of summer to go and vote for progressive candidates when they’ve maybe never done that before in their life.

What’s really exciting is that in places where our organizations are trying something new, we're really digging in to engaging folks who haven’t shown up before, our candidates are winning. If we continue to do the work of reaching out to low-income communities, communities of color — folks who have been traditionally left out of politics — and keep holding onto that in the general, we can prove the narrative wrong.

In terms of the general election, they’re gonna face really uphill battles, no question. If even two, three or five cornerstone candidates win, it proves the point that what people want in this moment now is not milquetoast candidates, not the status quo, but candidates who are different and dare to push the boundaries of what is possible.