How to Cover a Revolution

Powerful Democrats were undoubtedly rocked by the unabashed left-populist’s triumph over one of their own. But theirs was not the only “establishment” to be caught off-guard by the outcome. The mainstream political press had all but ignored Ocasio-Cortez and her groundbreaking campaign. 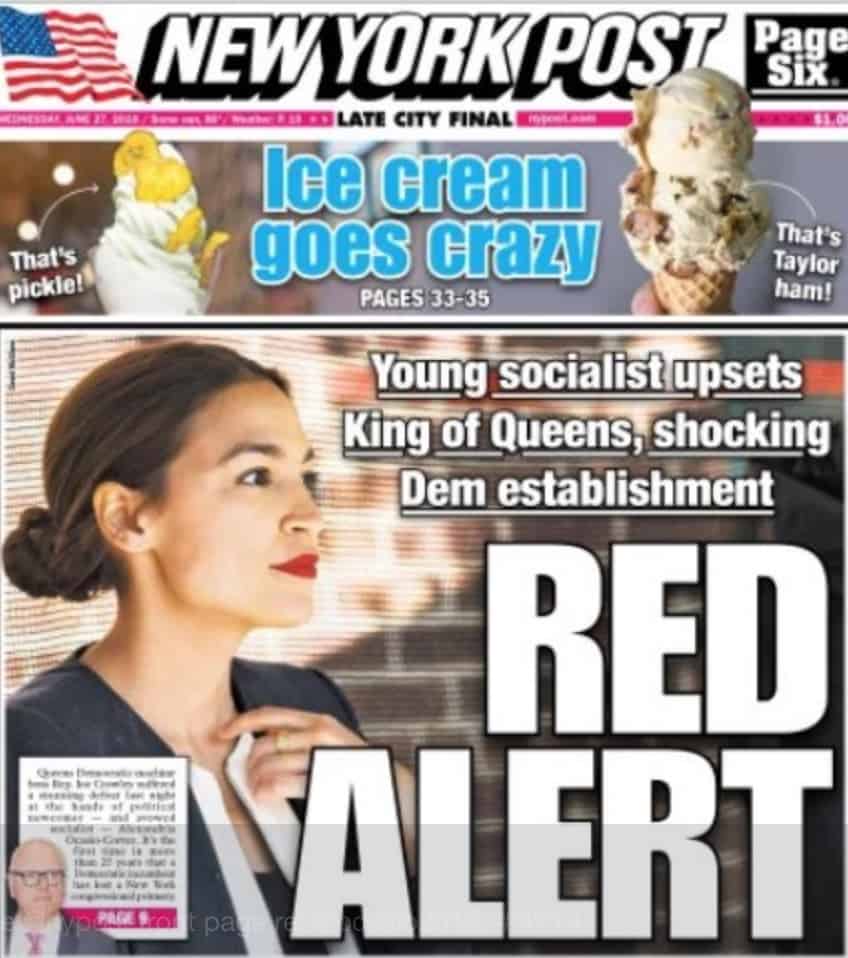 That was no surprise to anyone who remembered the mainstream media’s treatment of Bernie Sanders' 2016 presidential run – which quickly cycled from under-coverage to dismissal, with barely a breath in between – or the coverage of this year’s Democratic primaries, which have featured repeated dismissals and premature obituaries for the party’s left wing.

One of the district’s hometown papers, the New York Times, is a case in point. Less than a week before Ocasio-Cortez’s primary, the paper ran an article on Sanders and Our Revolution, the organization inspired by his 2016 campaign. The article acknowledged that Sanders’ “policy agenda has caught on widely among Democratic candidates and succeeded in moving the party to the left,” but said he “has struggled so far to expand his political base and propel his personal allies to victory in Democratic primaries.”

Nobody’s saying that now. But it was already a debatable view of the party’s left wing when that story went to press. Kara Eastman had already won an upset victory over establishment-backed Brad Ashford in Nebraska’s 2nd congressional district. John Fetterman had already defeated an establishment-backed candidate, in the Pennsylvania primary for lieutenant governor, with Sanders’ support.

Three insurgent candidates backed by the Democratic Socialists of America (DSA) had won Pennsylvania State House primaries. Lee Sanders, a DSA-backed candidate who was inspired by Sanders to enter politics, had been elected Virginia’s House of Delegates late last year.

Nevertheless, the Times article said that Our Revolution “appears to be flailing” and “has had only marginal success,” because “fewer than 50 percent of the more than 80 candidates it has endorsed have won elections this year.”

Another, more accurate, way to describe Our Revolution’s record would have been to say that it had won nearly half its races, even though it often faced well-established political machines with greater financial and institutional resources.

That winning streak has just been extended. Ocasio-Cortez, who was endorsed by both DSA and Our Revolution, defeated the fourth most powerful Democrat in the House, despite being outspent 10 to 1.

After her victory, the Times ran a profile of Ocasio-Cortez that appeared to tacitly acknowledge its own failure to cover her during the primary.

“Before Tuesday’s victory catapulted her to the front of the political conversation,” it read, “Ms. Ocasio-Cortez seemed to find readier audiences with outlets such as Elite Daily, Mic or Refinery29 — websites most often associated with millennial and female audiences — than with national publications.”

After a social-media firestorm about that paragraph’s implications – millennials and women are both national phenomena, after all, and both populations are often treated dismissively by mainstream media – the sentence was changed. It now refers to “traditional publications.”

Either way, the oversight was glaring – especially since Ocasio-Cortez is a local candidate for the Times.

Ocasio-Cortez's defeat of Crowley shows that the organizer's approach to electoral politics can work. While Crowley raked in money from deep corporate coffers – after years spent trimming his political opinions to optimize donor cash flow – Ocasio-Cortez eschewed the party establishment’s model of raising money for costly media buys and expensive consultants. Instead, she relied on small-dollar donors and an activist-based, community-centered ground game that carried the day.

“We beat a machine with a movement,” she said.

That model is likely to send chills down the spines of the politicians, apparatchiks, and consultants who run the Democratic Party today. If it continues to be effective, it will render their roles obsolete, especially since most Democrats want to see the party replace its current leaders and move to the left.

If these Democrats wanted a glimpse of their party’s future, they would have read the Harvard-Harris poll referenced in the last paragraph, along with another recent poll showing that most millennials want government to play a strong role in the economy – and most millennial Democrats have a favorable view of socialism. If they had, they might not have been as shocked by Crowley’s defeat.

Ocasio-Cortez’s candidacy puts the lie to the party establishment’s claim that there is a conflict between class and identity politics. A millennial Latina woman, she campaigned on a working-class platform of social – and socialist – change. Her candidacy reflects, and embodies, the fact that the party’s “rising electorate” – black, brown, female, and young – is more left-leaning than older and whiter Democrats. (Polls show that the “Bernie Bro” canard is, demographically as well as politically, a lie.)

Ocasio-Cortez’s win was not the Democratic left’s only June 24 victory. Ben Jealous, the former NAACP head who campaigned for Sanders in 2016, defeated the establishment-backed candidate and won the Democratic gubernatorial primary in Maryland with the support of Progressive Maryland, a People's Action affiliate, as well as Sanders and Our Revolution. University professor Dana Balter unseated the party establishment’s candidate in an upstate New York congressional primary.

Also noteworthy were the left’s near-wins. Popular movements rarely win decisively on the first go-round, especially when they're challenging a wealthy and well-entrenched establishment. I typically takes years to consolidate power and rack up decisive victories.

“This isn’t a baseball game,” Sanders said of his, and the populist left’s, fight against the establishment. But, even if it were, it would be too soon to declare a winner. We haven’t even reached the seventh-inning stretch.

How to Cover a Revolution

Media coverage of this year’s Democratic voting is often misguided, but one paper’s coverage of the June 26 primary got it exactly right:

“… Ms. Ocasio-Cortez was not the only liberal insurgent — or the only young candidate of color — to rattle the entrenched Democrats in the city. In Brooklyn, Adem Bunkeddeko nearly unseated Representative Yvette Clarke, a veteran incumbent from a local dynasty; he lost by barely 1,000 votes. And Representative Carolyn Maloney drew less than three-fifths of the vote against another first-time candidate, Suraj Patel.” (emphases mine)

This paragraph demonstrates the right way to cover a growing insurgency. It notes that Bunkeddeko nearly won his race, and that a large chunk of Maloney’s constituents voted for her populist opponent. That’s the trajectory new political movements often take at first: they begin with an upsurge in votes against powerful incumbents, before growing into winning majorities over time.

The paper that ran this thoughtful and well-balanced analysis? The New York Times.

The Times also reported recently that New York’s former Republican mayor, billionaire Michael Bloomberg, plans to spend up to $80 million supporting Democrats in Congressional races this year. The article, written before the June 26 primary, says that Bloomberg “indicated to aides that he only wants to support candidates who share his relatively moderate political orientation, avoiding nominees hailing from the populist left.”

The report says that Bloomberg “has conferred regularly with Representative Joseph Crowley, of Queens, who is the fourth-ranking Democrat in the House.” Not for long, he isn’t.

Establishment Democrats are addicted to big-donor money. Like any addiction, it feeds on itself, until the addict wrongly comes to believe that life would be impossible without it.

Bloomberg’s money can buy a lot of oil for the establishment’s machines. But few political machines are as well-oiled as New York’s Democratic Party, and it just lost to a movement. Journalists and party leaders, take note.