Why Primary Fights Are Good for the Democratic Party 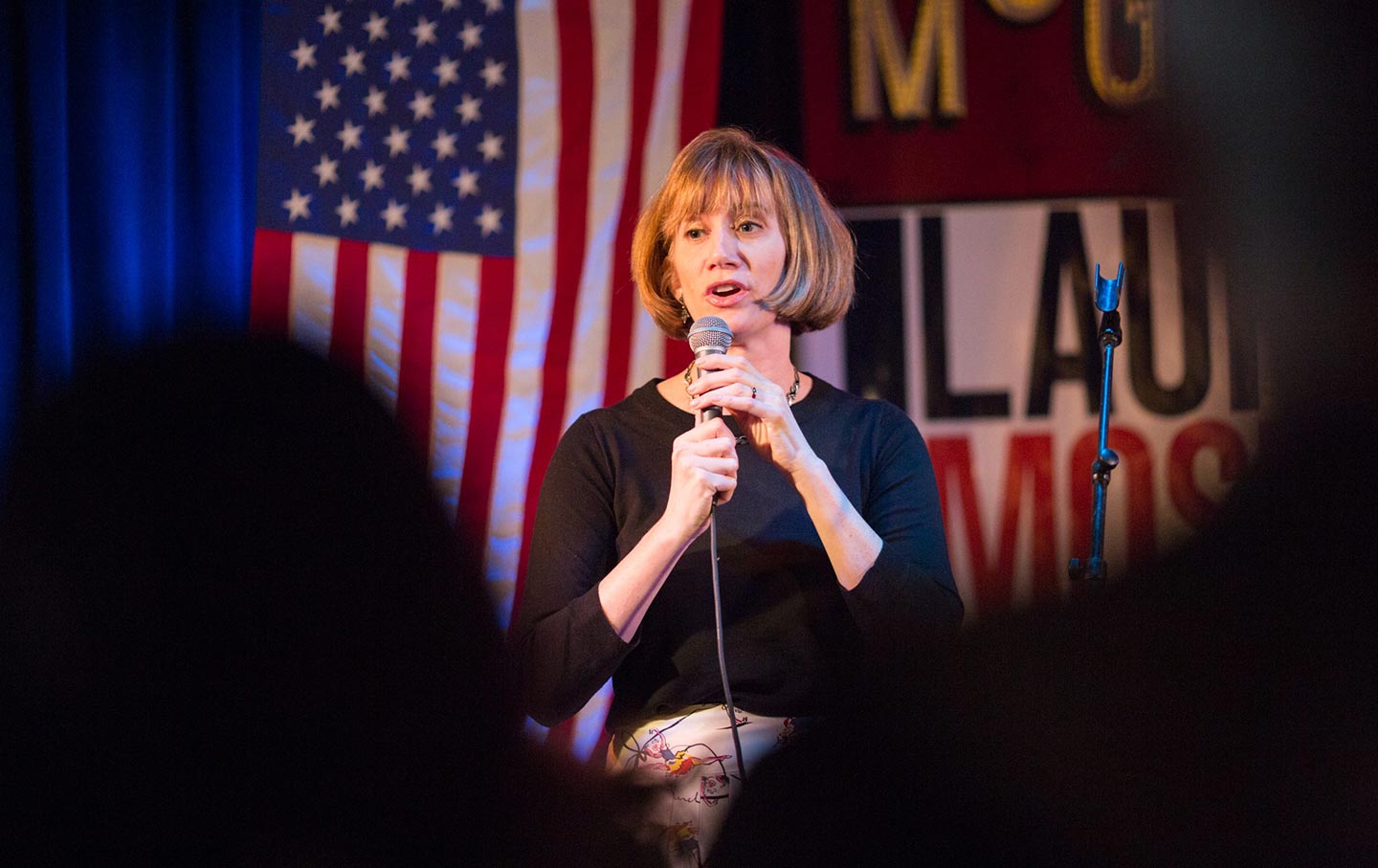 A taped conversation in which Representative Steny Hoyer, a member of Democratic House leadership, pushed an insurgent candidate to withdraw sparked the latest furor, and it deepened when House minority leader Nancy Pelosi backed Hoyer’s intervention.
In separate opeds, Jonathan Alter and longtime Democratic operative Elaine Kamarck argued that DCCC interference is essential if Democrats are to recapture a House majority in the fall. Both applauded the citizen mobilizations that could help generate a “wave election,” but essentially want activists to line up, salute, and let the pros take care of candidate selection. They couldn’t be more wrong.

Alter’s argument is the more scabrous; it accused “remnants of lefties in Jill Steinland” of “moral vanity” for “indulging” in primary fights that drain resources over “minor policy differences.” (He didn’t bother to explain why a primary challenger is equivalent to a third-party candidate.) Alter fretted that more progressive candidates might actually beat “well-funded moderates with better chances of winning in November.”

In this most important election, Democrats should put party and country over “personal preference,” he argued, and resist voting for the candidate whose views they support, and instead favor the one more likely to win in the general election. Built into this argument is the unquestioned assumption that the DCCC is best qualified to identify the right candidate.

Kamarck, an early champion of the New Democrats and a longtime DNC member, echoed Alter’s faith in the pros. She expressed regrets that the party has allowed candidates to be selected by voters in primaries rather than party officials in back rooms: She wants more, rather than fewer, superdelegates to help determine the party’s presidential nominee. The DCCC, she admitted, is “not always right,” but it is more concerned about “electability than ideological purity.” In her view, voters don’t understand that “not all congressional districts are Berkeley, California. “

It’s hard to be a weatherman if you can’t tell which way the wind is blowing. Alter and Kamarck have summarized the beliefs of a party establishment that doesn’t have a clue.

Even in traditional political terms, the argument is unconvincing. It doesn’t consider the Democratic establishment’s record of abysmal failure. Over the past decade, Democrats lost control of both houses of Congress, 1,000 seats in statehouses across the nation, and the presidency to the most reviled candidate in history. The party committees haven’t cleaned house or changed strategy. The same consultants, the same pollsters, the same operatives still are at the wheel. If they were mechanics, you would not keep hiring them to fix your car.

The DCCC’s strategy to pursue bland, “safe” candidates is particularly questionable in an off-year election; midterms are often marked by low turnout. Activist energy and base mobilization are critical. Democrats are talking about a wave election because the resistance to Trump is combining with momentum from the Sanders campaign along with movements like #MeToo and Black Lives Matter.

Candidates can help fuel that energy or depress it. The DCCC’s screen for candidates starts with those who can give or raise a lot of money. It favors “moderates” who might appeal to the center—thus there is a preference for veterans and ex–intelligence officers, businesspeople and corporate lawyers, even for former Republicans. The theory goes that Trump will naturally mobilize the Democratic base to vote, and moderate candidates will have a better chance to attract independents.

But voters right, left, and center are increasingly suspicious of traditionally packaged, blow-dried candidates. Voters are looking for authentic leaders who will shake things up. The DCCC’s business-as-usual approach is increasingly out of step with the times.

Primary fights can help build energy, interest, and mobilization—or they can be divisive. Part of that depends on how challengers are treated by the establishment. The DCCC’s heavy thumb on the scale—particularly in the wake of the revelations about the DNC’s machinations in the 2016 presidential primaries—is increasingly likely to backfire.

When the DCCC unleashed a personal attack on Laura Moser in a Texas congressional race, the popular reaction in fund-raising and activism surely helped propel her into a runoff against the DCCC’s designated candidate. Worse, DCCC interference may well end up leaving activists embittered, which saps energy for the general election.

Alter believes there is a limited pool of money and energy that primaries needlessly squander. But energy and money in politics are a function of excitement and interest. Primary challenges—particularly substantive ones—can help build energy, capture interest, and generate more resources.

Alter and Kamarck both assume that Trump is so threatening and outlandish that Democrats can be successful with the traditional playbook and candidates—a  strategy shared by Clinton’s 2016 campaign, and one that didn’t work out so well.

This ignores the larger failure of establishment politics: The system hasn’t produced for most Americans, who even now understand their wages aren’t keeping up with the costs of necessities. By scorning primary fights as reflecting the “narcissism of small differences,” Alter seems perversely oblivious to what is going on. The populist uprising in the party—personified by the Sanders campaign in 2016—isn’t about petty disagreements. Democrats are only beginning what will be a furious argument over what the party stands for, what its coalition is, and how it will do politics.

Are Democrats the party of Wall Street and Silicon Valley? Will the party build an upscale coalition using identity politics and neoliberal economics to fuse socially liberal professionals with African-American and Latino base voters? Or will the party reconstitute itself as a party of working people, across all lines of race, that champions populist economics? Is the party wedded to big-money politics or building a politics grounded on small donors and citizen participation? Will it continue to provide bipartisan support to our interventionist foreign policy or demand an end to endless wars and the beginning of a new strategy?

This year’s primaries are but an early round of this argument. The energy in the party is clearly on the progressive-populist side. Potential 2020 presidential contenders reflect that reality, as they embrace reforms like Medicare for All, a good-jobs guarantee, tuition-free college, and more. This fight within the party is likely to build, not decline. To dismiss it as narcissistic or moral vanity is to miss what is a historic and long-overdue debate.

Alter and Kamarck both point to the Republican Party as a cautionary lesson. In some instances, Tea Party activists indeed nominated nutcase candidates—including one who memorably decided to declare she was not a witch—and that may have cost them Senate seats they could have won. Yes, insurgencies make mistakes too. But neither Alter nor Kamarck notes that, fueled by the Tea Party surge (and by big right-wing money), Republicans have won control across the board, and the Tea Party has driven the broader party to the right. And the big reform ideas driving the left in the Democratic Party have far wider popular appeal than the Tea Party agenda on the right.

It remains to be seen how Democrats will perform in the November election. Trump’s approval ratings are abysmal, though ticking up with the economy. Republican legislators are deeply unpopular, but recent polling shows them catching up with Democrats on the generic congressional ballot. Democrats have raised record amounts of money, but the flood of conservative dark money is yet to come. The calls for Democrats to unify are likely to build in coming weeks.

But the debate about the party’s direction has only begun. Democrats should be happy that it is taking place within the party and in its primaries. They’d be wiser to embrace the energy and open the party up, rather than demand that activists stand down and let the party’s pros make the calls.

This article was first published at The Nation.