U.S. Senate and House committees have approved competing bills that purport to address the “opioid crisis.” Since these are consensus measures, it’s no surprise that the legislation is a catchall of small ideas.

Sure, progressives should enact whatever they can. But thus far, this legislation is more PR than solution.

That PR - the claim that Congress is substantially addressing the opioid overdose problem - is the first of two layers of conservative hypocrisy on the issue. Because even if every single one of these ideas becomes law, they will still not save enough lives. 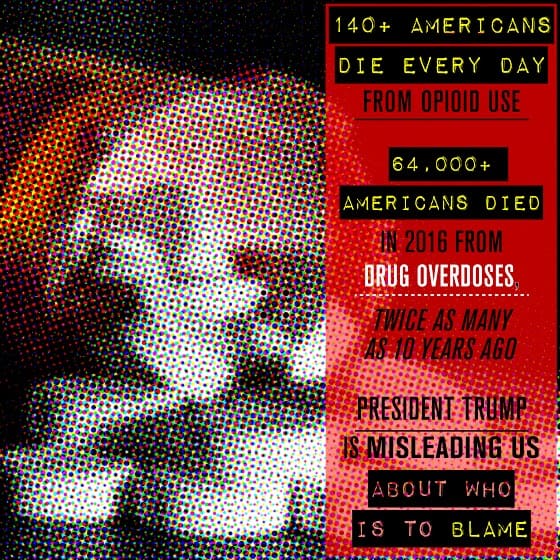 Only one in ten Americans who need it are getting treatment for drug addiction. Congress needs to spend money in order to expand the availability of treatment. But for all their ambitions, these House and Senate packages don’t include funding. As Rep. Kathy Castor (D-FL) put it, “We’re tinkering around the edges—we’re not tackling this public health crisis.”

There is an alternative. Senator Elizabeth Warren (D-MA) and Rep. Elijah Cummings (D-MD) have introduced the Comprehensive Addiction Resources Emergency (CARE) Act of 2018, which would provide an additional $100 billion over 10 years to increase access to substance use treatment and fund related medical research.

If members of Congress really cared about the victims of this epidemic, they’d support the Warren-Cummings legislation or something like it.

But there’s a problem; conservatives don’t really care, so they won’t.

In Black and White

To understand the roots of this hypocrisy, we have to reach back into America’s political history. You already know some of it.

According to journalist Dan Baum who was writing a book about politics and drug restrictions, former Nixon domestic affairs adviser John Ehrlichman said in a 1994 interview:

The Nixon campaign in 1968, and the Nixon White House after that, had two enemies: the antiwar left and black people. You understand what I’m saying? We knew we couldn’t make it illegal to be either against the war or black, but by getting the public to associate the hippies with marijuana and blacks with heroin, and then criminalizing both heavily, we could disrupt those communities. We could arrest their leaders, raid their homes, break up their meetings, and vilify them night after night on the evening news. Did we know we were lying about the drugs? Of course we did.

Nixon’s racialization of drug use  was just the beginning. In 1982, Ronald Reagan announced a “war on drugs,” and in 1984, Nancy Reagan launched the “Just Say No” campaign. In 1986 Congress enacted mandatory minimum sentencing, focusing attention and the harshest sentences on crack rather than powder cocaine - because crack users tended to be (or be perceived as) people of color while users of powder cocaine were white.

The strategy continued. In his first televised address as president in 1989, George H.W. Bush held up a bag of crack cocaine and called it “the greatest domestic threat facing our nation today.”

The bag had been taken from a black 18-year-old novice dealer who was lured by the Drug Enforcement Administration to Lafayette Park (next to the White House) specifically to get a prop for Bush’s speech.

So for the past half-century, conservatives have used drug addiction as a white-against-black political banner, rather like the confederate battle flag. It’s been a racial dog whistle.

Now that drug users are increasingly perceived as white, conservatives have finally decided to join progressives in at least talking about drug abuse as a public health issue. Now, these lawmakers say, hearts in hand, they want to focus on the narcotic, instead of punishing the people abusing them.

But—wanting to be fair—you might wonder: isn’t this situation different from the 1980s and 90s, because today’s drug users are mostly dying from the use of legally prescribed drugs—so less deserving of punishment?

But even more crucial, look at the trends.

The number of deaths from all other opioid prescriptions—the type of medicine that politicians and the media are hysterical about—increased from 10,943 in 2010 to 14,487 in 2016. This represents a 32 percent increase, which is sad. But…

In sum, white folks are dying, so conservative politicians are crying crocodile tears. But just as in the past, today’s emergency is overwhelmingly a matter of illegal drug use, not prescriptions. For conservatives to declare it’s a “health care issue” now, suggesting that today’s opioid addicts are somehow less culpable than the ones they so harshly punished in the past is race-baited hypocrisy.

If lawmakers truly want to end the opioid crisis, they’ll need to finally put their money where their mouth is - and invest at least as much as Senators Warren and Cummings suggest, to support research, harm-reduction strategies and access to care for those affected by this epidemic.

Where, you ask, might this money come from, in our age of budget cuts and austerity?

The answer is closer at hand than you might think - why not a windfall tax, as the authors of a recent report suggest, on the gigantic profits billionaires like John Kapoor, the Sackler family and John Paulson rack up on opioid sales every year?

There are surely creative solutions like this that can defeat our current opioid crisis. But to find them, our lawmakers have to be willing to offer us more than their crocodile tears.