We Must Stop the Assembly Line of Conservative Judges

“Reining in the activist judges is an enormous job, but the American people are up to the task,” says Carrie Serevino, the former clerk to Supreme Court Justice Clarence Thomas who now heads the Judicial Crisis Network (JCN).

The JCN is a right-wing lobby that demonstrably creates judicial crises by spending millions to support arch-conservative nominees to the bench, and undermines more moderate candidates.

In fact, we feel so strongly about judicial activism that back in 2014, my people-powered organization, Keystone Progress, took on the task of stopping a terrible judicial nominee, the Pittsburgh attorney David Porter, by organizing tens of thousands of people to stop his nomination.

In 2014, we succeeded in blocking Porter’s appointment. That’s the good news.

The bad news is that President Trump, undeterred by what people want, has now nominated Porter again, this time to the 3rd Circuit Court of Appeals. This is a lifetime appointment to a Federal Court.

And this time, Severino’s network of judicial activists was ready with a preemptive strike against us, specifically, on the pages and pixels of the conservative National Review. 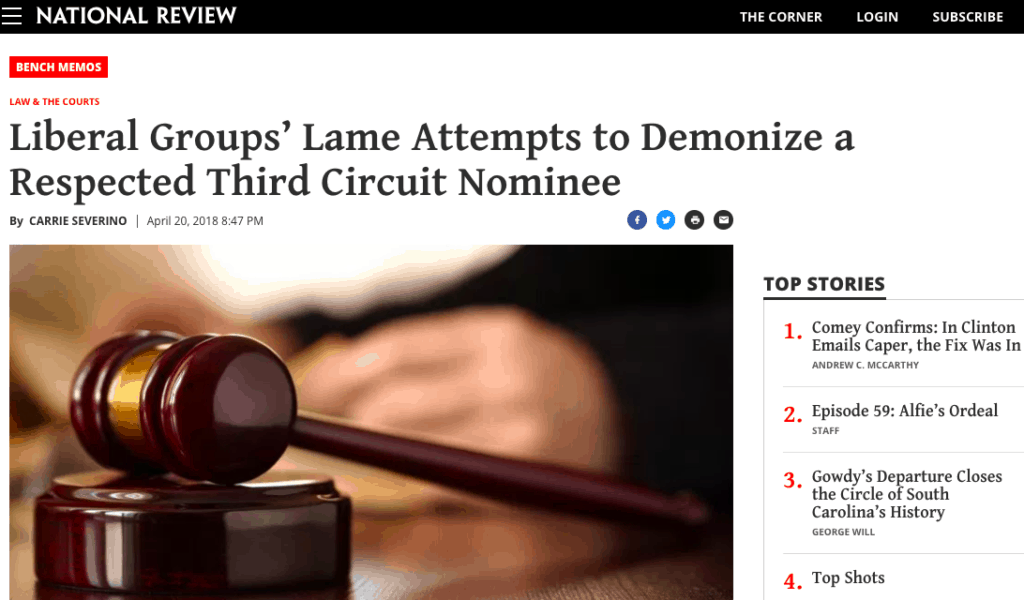 To call David Porter an activist would be an understatement. He has dedicated his life to leveraging the judicial system toward the powerful, the dominant and to advance extreme conservative ideologies. What’s his record as a jurist? Kadida Kenner of Why Courts Matter, sums it up this way: “anti-labor, anti-union, anti-women’s rights, anti-workers’ rights, anti-civil rights and anti-LGBT rights.”

Porter is a close friend, confidant and former attorney to former Pennsylvania Senator Rick Santorum. He’s donated over $14,000 to conservative politicians, including Santorum. He is a graduate and member of the Board of Trustees for Grove City College, a conservative Christian school that prides itself on its ability to discriminate, and like Santorum, opposes birth control.

Porter’s activism is not limited to social issues and electoral politics. He’s been the recipient of an award from The Atlas Foundation, named for Ayn Rand’s book and awards people who actively espouse her absurd objectivist ideology. And most pertinently, he led the Pittsburgh chapter of the conservative judicial activist group the Federalist Society, which is anti-worker, anti-LGBT and wants to insert religion into public institutions.

The Federalist Society also saves Donald Trump the headache of finding pro-corporate, ultra-conservative lawyers on his own to nominate to federal judgeships. Their vice president, Leonard Leo, keep a running list of candidates on Trump's desk – such as Gorsuch and Porter.

The Federalist Society is bankrolled by the Koch brothers and other energy extraction tycoons. They enlist and support legal eagles who they hope will one day favor them when their polluting industries inevitably run afoul of the law and life-saving regulations.

For these donors, conservative, pro-business judges are a sound investment: under the guise of promoting ‘values,’ a company cultivates a network of friendly faces on the bench. David Porter is just the latest to reach the end of this conveyor belt, where the will of the rich and powerful few is imposed on the many.

The real judicial activists, like Severino’s Judicial Crisis Network and the Federalist Society, exist to push their extreme ideology by promoting judicial appointments and pouring dollars into judicial elections.

In her attempt to stymie a reawakening of the movement against Porter, Severino referenced a comment Keystone Progress’s founder, Mike Morrill, made about Porter’s nomination in 2014. He said “it’s hard to believe he would be a fair and even-handed judge.”

I’ll take Morrill’s assessment a step further. If Porter were even-handed, Severino, the JCN and the Federalist Society would not support him - because their very purpose is to advance an extreme right-wing agenda, and push well-trained ideologues like him on the American people through the courts.

It Falls to the People

So once again, it falls to the people to stop this kind of judicial gerrymandering, and rise up with many voices to deliver this one message: David Porter is an extreme, right-wing ideologue who does not belong on any judicial bench.

Porter is particularly ill-suited to decide cases with wide-ranging precedents that would affect all Americans, as he would on the 3rd Circuit.

Should Severino and other extremists succeed, Porter will undoubtedly deliver rulings that reflect his ideology, the one he has expressed through so much activism. Whether it’s the right to organize, the right to choose how and when to give birth, or the right to marry whoever you love, David Porter will keep doing all he can to undermine these rights.

Let’s show Carrie Severino, the Federalist Society and all of the right-wing judicial activists who think our nation’s courts belong to them that the people are up to the task of reining them in, once again.