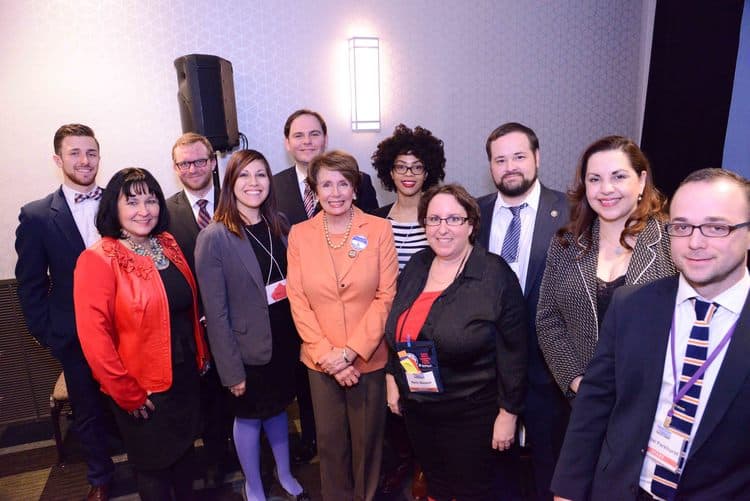 Since its founding in 1991, the CPC has grown from six Members to seventy-seven, becoming the largest House caucus and an essential forum for articulating progressive values. Co-chaired by Reps. Mark Pocan (WI) and Raúl Grijalva (AZ), it includes progressive leaders such as Sherrod Brown (OH), Keith Ellison (MN) and Pramila Jayapal (WA).

Discussions at this year’s summit will zero in on key issues and movements likely to drive the public debate over the next year. The central question is how and whether progressives inside and outside the congress can organize to meet the stark challenges facing this country.

There will inevitably be significant debates about strategy and priorities, but there is a growing consensus around some basic propositions.

Trump is The Symptom, Not the Disease

Donald Trump is in the White House because the establishment of both parties have failed most Americans. The bloviating reality TV show buffoon was the most unpopular presidential candidate in polling history, yet dispatched the Bush dynasty in the primaries and the Clinton dynasty in the general. He combined a populist indictment of their failed policies and corrupted politics with vicious racist and nativist appeal. That he won is a measure of how much Americans were intent on shaking things up.

Trump Will Fail Not Because of His Populism, but Because It's a Put-on

Beneath the chaos presidency, Trump has given his administration over to the failed strategies of the right. He’s delegated his foreign policy to the generals, his economics –outside of trade – to Goldman Sachs, his domestic policy to the Republican right, his social policies to the evangelical right. His corrupt administration is sponsoring a predator’s ball, inviting corporate lobbyists to rig the rules once more and larding tax breaks and subsidies on the rich and corporations.

Progressives Got It Right, Even as They Got Rolled

From the beginning, progressives challenged many of the basic assumptions of the conservative era, even as New Democrats and Blue Dogs embraced them.

In a global economy, New Dems were wrong to argue that the “era of big government is over.” Expanded government protection of basic economic rights are essential in a globalized economy of increasing instability.

New Dems were wrong to dismiss unions as neandrathal institutions of a bygone era. Workers wages, conditions and benefits declined as the corporate offensive against unions succeeded. Progressives were right that weaker unions would undermine the Democratic Party, support for progressive reforms, and corporate accountability.

Progressives like Barbara Lee were right to warn against providing a blank check to the President after 9/11. Progressives were right to vote against the invasion of Iraq, the worst foreign policy debacle since Vietnam.

Progressives were right to warn against the corruptions of big money in politics, even as right-wing judicial activists on the Supreme Court opened the flood gates in Citizens United.

Progressives were right to warn against gutting the Voting Rights Act, even as the same activist judges ruled that racism had been vanquished.

Progressives were right to warn against the deregulation of Wall Street in the 1990s and right to call out the Senators repeating the same mistake today.

This list can go on. Progressives should be emboldened, while New Dems and Blue Dogs should be engaged in an agonizing reappraisal of where they went wrong.

Progressive Reforms Are Not Only Necessary, but Popular

The Congressional Progressive Caucus PAC is releasing a poll that demonstrates widespread support for a broad range of progressive reforms. Polls show that virtually every one of the 11 points in the Pledge to Fight for America’s Future that over 9000 progressives signed in a matter of days enjoys majority support. Americans in large numbers favor Medicare for all, Raise the Minimum Wage, Rebuild America, a Green New Deal, balanced trade, tax the rich and corporations, strengthen consumer, environmental and worker protections, tuition free college and more.

This is remarkable given that these reforms seldom get a fair or extensive hearing in our media or our politics. Surely one of the central reasons Bernie Sanders improbable campaign took off what that finally fundamental reforms found a fierce and unbending champion. As Hillary Clinton admitted in her book on the campaign,

Resistance to Trump is necessary, but not sufficient. Getting it right is reassuring but not enough. Progressives must organize not simply to fight but to win the battle over America’s future.

This won’t be easy. The establishment in both parties resists change. Big money corrupts our politics. Partisan posturing too often distracts from the debate that we need.

Progressive movements – Fight for $15, Black Lives Matter, #metoo, the Dreamers, the March for our Lives and more – are rousing citizens and energy. Progressive organizations – Our Revolution, Moveon.org, DFA, PCCC, Working Families Party, People’s Action, JusticeDemocrats and more -- have begun to build the capacity to recruit and support candidates. The Congressional Progressive Caucus has strengthened its ability to frame reforms, and drive them onto the national agenda.

The resistance to Trump rouses Democrats, and the threat posed by Trump and the radical right-wing Congress will unite them. At the same time, however, progressives must push to define what the Democratic Party is – the fundamental reform agenda that is needed, the coalitions that need to be forged, the transformations of how we do politics that are required.

The argument can’t be ducked. The operatives of the established order will scorn and strafe insurgents, as the DCCC’s attack on Laurie Moser in the Texas congressional primary demonstrated. Progressives will be told to lower their voices or curb their ambitions in order to unify against the right. The party’s establishment will continue to back candidates wedded to the failed ideas and big money politics of the past years.

This will be messy, fierce, tumultuous, disruptive and utterly unavoidable. People are demanding change. Movements are driving it. Progressive leaders are championing it. And if we are lucky, the agonies will help give birth to a revived progressive majority for fundamental reform.

The CPCC summit is small part of this struggle, offering progressives a place to share ideas and strategies. But the stakes grow ever larger. This is our time; people are looking for change.

We are called on to be the makers of this history, not its victims. Let's get to it.