Forget Trump; His Party Is the Problem Now

It's Political Messaging 101: You can't beat Trump by talking about him all the time.

We should be talking about our economic future, but all we're talking about our 45th president. Look at this chart, which shows the top story on social media accounts by social category for the first year (more or less) of Trump's presidency: 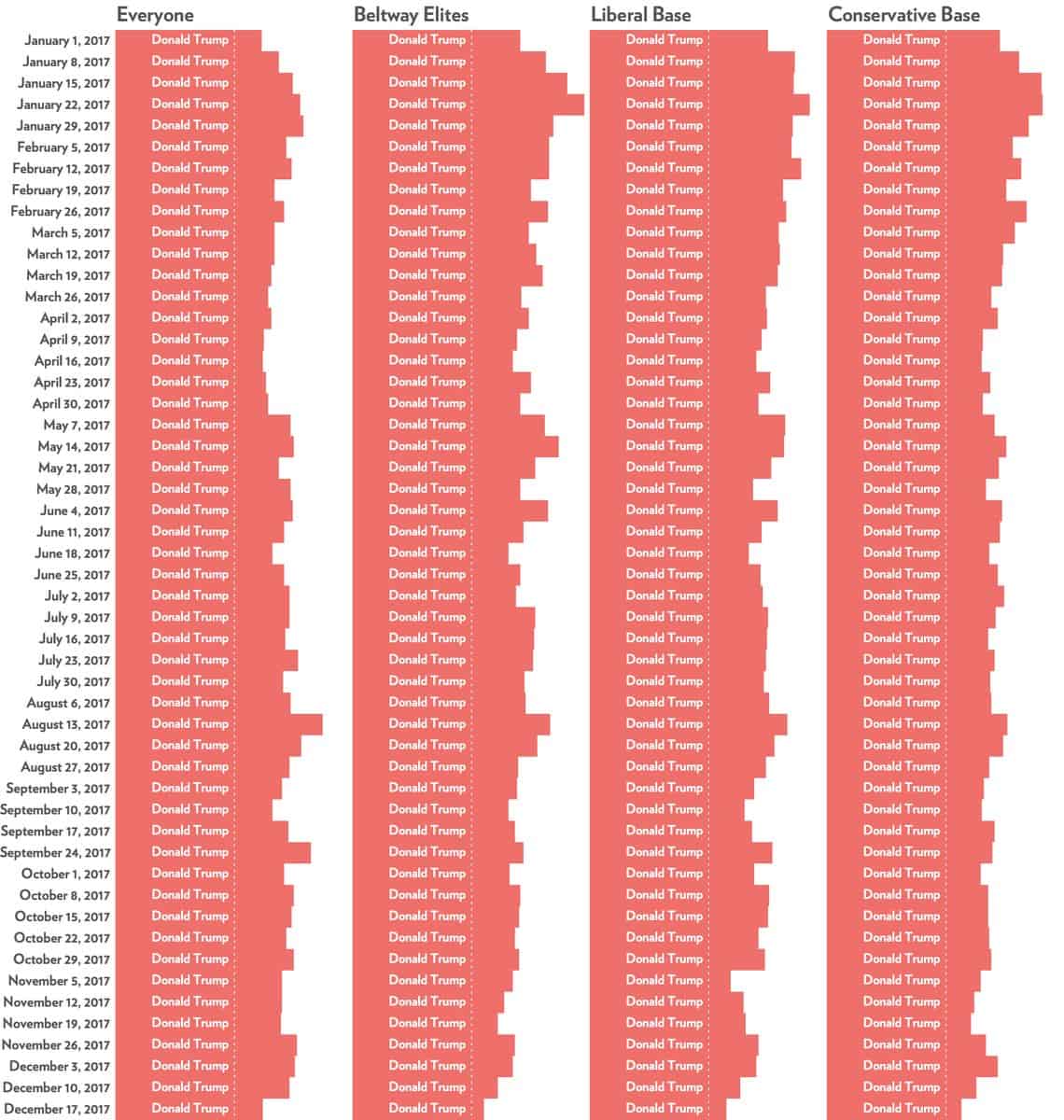 Stunning, isn't it? Trump dominates the media landscape like some paint-and-plaster Colossus, his conquering limbs striding from news cycle to news cycle.

I agree with Ezra Klein on at least one crucial point about this chart. (It's from Klein's piece, "Trump is winning.") The president is  "setting both the terms and tone of the debate."

The Rest of the Story

When everyone is focused on our 45th president, how can Democrats hold your attention long enough to make the case that they will make people's lives better? Here's what that chart looks like if you take Trump coverage out of the picture: 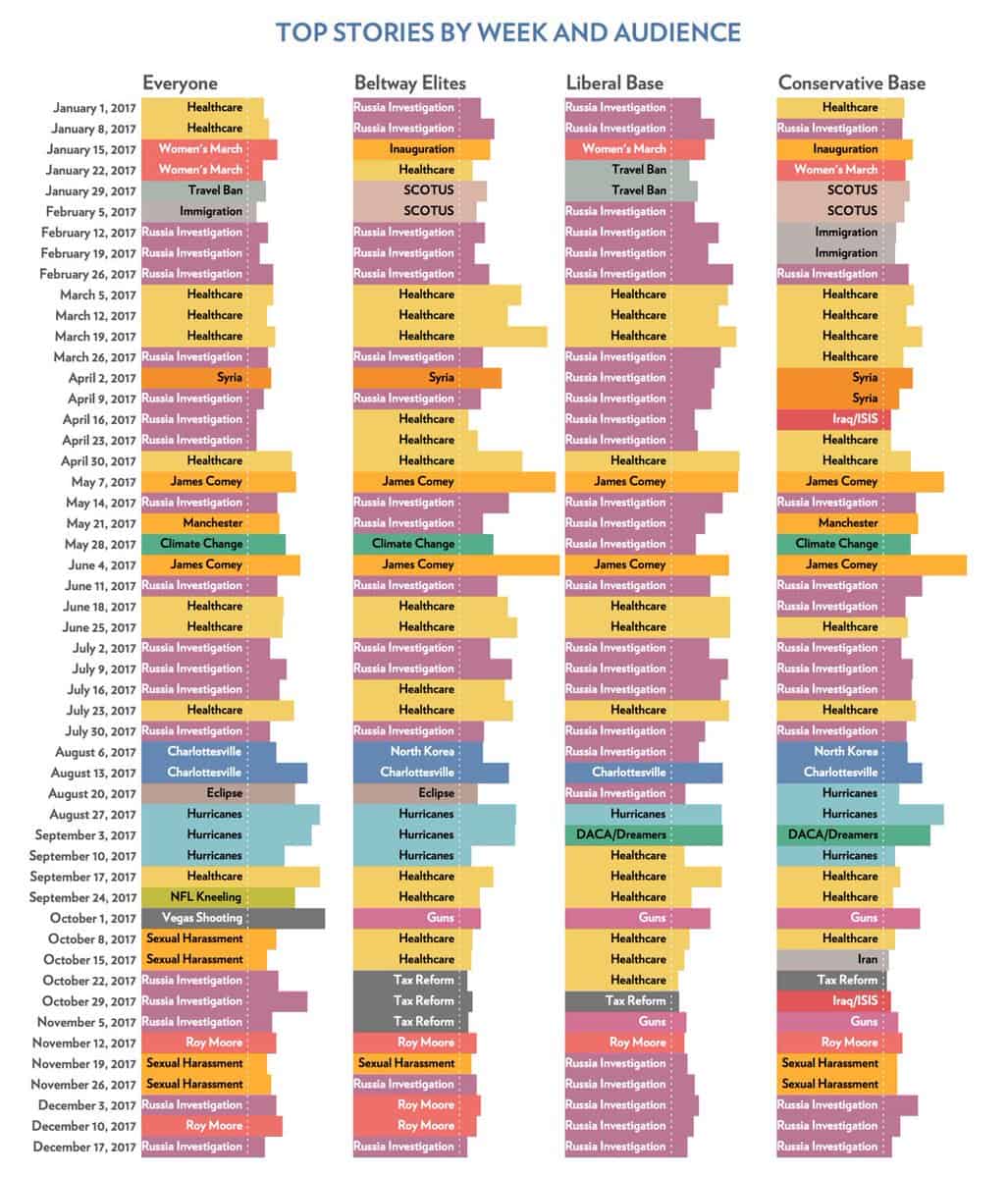 Two stories seem to have staying power across all four categories: the Russia investigation, and healthcare. One of those stories involves Trump and the people around him, but doesn't address the issues that affect people's day-to-day lives. The other affects their lives – and sometimes deaths – directly.

Democrats have devoted a lot more attention to the first story, Russia, than they have to the issue of healthcare. 16 Democratic senators joined Bernie Sanders in sponsoring a Medicare For All bill, including most of the party's presidential candidates in that body. But the party is divided on the topic, as it is on other crucial economic issues.

The party’s predilection for mingling with lobbyists and other high-dollar donors, as reported here and elsewhere, isn't helping to resolve its split. And so, leading Democrats and sympathetic pundits have been focusing on Trump’s personality and the Russia investigation instead.

A Democratic email blast sent last month included the rather plaintive subject line, “Let’s get into Trump’s Twitter feed.” Is that as high as the party now dares to dream?

But the Russia investigation is something of a Rorschach test. Many party loyalists see it as an open-and-shut case: Trump has treasonously conspired with a foreign power and must be impeached. I hate to be a killjoy, but that does not seem to have been confirmed by any independent investigation, including Robert Mueller's. It may be someday, but that's far from certain.

Russia certainly fires up the Democratic base. It is the topic that seems to interest it the most, aside from Trump himself. But it should be noted that the Russia story is itself a Trump story, and this interest has been fueled in part by the relentless focus on this narrative by party leaders and media allies.

That lets the Republican Party, including Trump, off the hook for its better-documented nefarious deeds. With this week's unveiling of Trump's infrastructure plans and budget proposals, as well as other recent stories, American have learned that the president and his party:

Want to cut Social Security, Medicare, and Medicaid by $1.8 trillion.

These cuts would hit seniors especially hard, since Medicare is their primary source of health care and Medicaid pays roughly two-thirds of all nursing home costs. As Nancy Altman of Social Security Works says, Trump also has proposed slashing Meals on Wheels, home heating assistance, and other programs for seniors.

Seniors turn out to vote in off-year elections in disproportionately large numbers. When voters miss this story, it helps Republicans.

Would impose work requirements and lifetime caps on Medicaid.

The Administration's drive toward work requirements for Medicaid will be devastating for poor families. 43 million Americans are poor. And since 60 percent of Americans will spend at least one year of their lives in poverty, according to a 2015 study, this could affect many more working families in coming years.

Trump's Department of Health and Human Services is also looking at imposing lifetime limits on Medicaid coverage, as noted by Fierce Healthcare, a health industry newsletter. This could result in Dickensian horror stories, and the deaths of thousands of people every year.

Want to sell large chunks of America's infrastructure, including highways, to corporate interests.

As Sam Pizzigati notes, the intrusion of corporations into government, combined with the free-market ideology that has gripped leaders of both parties, has already led to rush-hour highway tolls that approach $50 for a one-way trip in suburban Washington D.C.

Rather than tax the area's millionaires to build and maintain adequate roads, leaders in the surrounding states have opted to impose "market-driven" tolls on commuters. Meanwhile, the DC-area Metro subway system – once a source of national pride – continues to crumble as funding declines.

Trump's infrastructure plan is a sham. Its "$1.5 trillion" price tag actually amounts to only $200 billion in federal spending over ten years – less than one-sixth of the advertised figure – and that amount would be purloined from other vital programs.

This much-vaunted plan is a letdown, even from previous Republican presidencies. George W. Bush signed a $286.4 billion infrastructure bill in 2005. That's $359 billion in 2018 dollars. Bush also started a $2 trillion war by misleading the American people. That hasn't stopped a majority of Democrats from wallowing in misplaced nostalgia for his presidency, according to an October 2017 poll.

And therein lies the danger for Democrats. When they paint Trump as uniquely venal, they open the door for a public embrace of other Republicans – including Vice President Mike Pence and House Speaker Paul Ryan.

That's not just politically foolish. It's also a misreading of the man himself. Trump is not a deviation from Republican ideology or beliefs; he is their fullest flowering. He is not the party's nightmare. He is its id, the manifestation of its darkest impulses.  His biases are their biases, as seen in a recent GOP immigration bill that echoes Trump's proposals. On economic matters, he now shares his party's Randian, dystopic vision.

Democrats should respond, first and foremost, by distinguishing their policies from those of Trump and his fellow Republicans. The House Democrats' $1 trillion infrastructure plan is a good start, but it has failed to get media traction in today's Trump- and Russia-dominated discourse.

They should link other Republicans to Trump – not because they are personally as crude and hateful, but because they share the same goals and values.

EPA administrator Scott Pruitt, who seems determined to match the carbon footprint of a coal-fired power plant with his extravagant private plane usage, is a Republican. So is Health and Human Services Secretary Alex Azar, the Big Pharma executive who is spearheading that inhumane experiment in Medicaid coverage limits. (He used to work for George W. Bush, that Democratic sentimental favorite.)

Despite the pundits' misplaced hopes in Gen. John Kelly, Trump's ex-Marine Chief of Staff exacerbates all his leader's worst tendencies. Anybody who was paying attention to Kelly during his tenure at Homeland Security knew he is a terrible human being.  Now we know he's also an incompetent manager.

Marco Rubio, who's positioning himself as a civilized alternative to Trump, recently proposed that working people should trade family leave for Social Security coverage. That's like saying, "I don't have to share our food. You can gnaw off your own leg instead."

Mess on the Highway

We can't ignore Trump as a personality, because his behavior sets a tone for the nation. His greed, racism, corruption, and troglodytic attitude toward women and their abusers, appear to be having a profound and damaging effect on society. Attacks on Muslims and Latinos are on the rise, and he is trying to lead a backlash against the rights of women and minorities.

Trump is is impossible to ignore, like a festering carcass on a six-lane highway. That makes him irresistible to writers; I've slipped a time or two myself. But what's true for that carcass is also true with him: if you don't turn your eyes away eventually, sooner or later you're going to crash.

It's true that the Democratic base loves to dish about Russia, and loves to trash Trump. These stories have probably played a significant (though hardly exclusive) role in a string of off-year victories since Trump took office. Democrats still face a struggle trying to retake the House, but things are looking better.

Still, what happens if Democrats eke out a slim majority and retake the House? Will they pass a bold series of bills that show voters what their party would do if it took back the Senate and White House? Or will the party avoid alienating its funders by restricting itself to hearings about Trump and Russia?

Democrats might even succeed in impeaching Trump; it only takes a simple majority to do so. But what then? A Republican Senate would not vote to convict him. And even if Trump stepped down or was removed, another Republican would replace him. In the meantime, the party would have failed to present an agenda voters can rally around – especially the 40 to 50 percent who don't vote at all.

Unless... Mike Pence is impeached and forced from office too. If that happens, Nancy Pelosi would become president. Now that would be interesting.

But the question would remain, as President Pelosi sat down at her desk in the Oval Office to begin the first day of her presidency:

What does her party want to do now?