Charlottesville Is An Urgent Call for Voting Rights

Saturday night I arrived in Virginia as the conscience of the country and world turned toward the state. Earlier that day, hundreds of organized white supremacists gathered for a “Unite the Right” rally in Charlottesville in the mountainous Western part of the state, home to the University of Virginia. 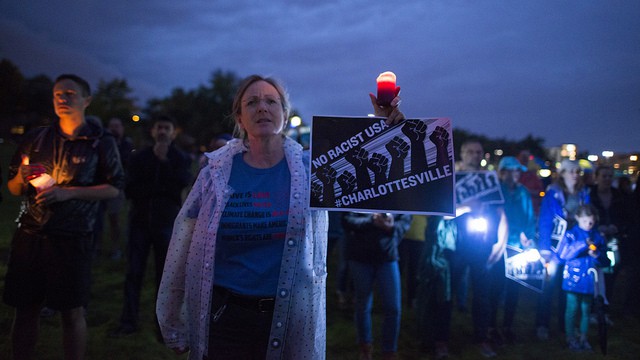 Then a twenty-year-old white supremacist drove a car into the peaceful crowd, killing Charlottesville resident Heather Heyer and injuring at least 19 others.

The response from millions is sadness and outrage. A broad coalition of organizations all across the country held nearly 1000 local vigils and protests within 48 hours.

I joined hundreds of others at Central Park near Virginia Beach Town Center, where clergy and a multiracial group of all ages gathered peacefully to mourn, pray and pledge resistance to racism.

Jena Garren, a young local woman who was in Charlottesville the day before, spoke to the crowd, describing what she had experienced as a “war zone.” International outcry condemned the violent rally and the racist sentiments behind it.

President Trump was less forthright. He initially condemned “hatred, bigotry and violence on many sides – on many sides,” offering equivalence to the organized fascists with those who defended themselves from their assault. After two days of widespread outcry, Trump finally called white supremacy by name, declaring “racism is evil.”

The nation’s swift rejection of white supremacists is quite important. As is the broad pressure on a hypocritical President to not just condemn avowed racists — which should have been easy enough, but wasn’t — but to fire their allies within the White House and distance himself from their agenda.

What Is To Be Done

How can we truly defeat organized racist organizations and their dangerous ideology?

For those of us committed to racial justice, there is plenty of work to be done. We have to take on deep housing segregation, persistent wage inequality, police violence, take down the symbols of slavery and the Confederacy, and much more.

Fulfilling the promise of the Civil Rights Act of 1964 by finally securing full universal voting rights, especially in places like Virginia, where they are actively undermined, would be the biggest blow to the racists who bloodied the streets of Charlottesville last weekend.

Virginia, like most states, disenfranchises people with felony convictions. They also make it a lot harder to regain voting rights than in other states.

This disproportionately restricts the voting rights of African Americans. And while there is a path to regain voting rights, it is a difficult one that many don't know about or cannot follow.

Is it any wonder that these disenfranchisement laws go back to the dismantling of Reconstruction in the South?

White supremacists rallied in Virginia to defend a statue of Robert E. Lee, the general who led Confederate soldiers to defend the enslavement of human beings. The Charlottesville city Council has voted to take this statue down. Supremacists decry this as an act of “revisionism” and claim they are standing up for “white culture.”

What unites the Klan with neo-Nazis and other white nationalists is that they revel in the notion of Black slavery and white domination. To them, Lee, Jefferson Davis and other leaders of Southern secession are heroes, not traitors to the the U.S. government and its people.

But the existence of the Confederate monuments and public institutions named for slave owners and murderers is itself a revision of history. These monuments were raised to repudiate and threaten the victories of the struggle for Black freedom, especially the right to vote.

It’s no accident that over the last century, the KKK revived and then was joined by U.S. groups sympathetic to Nazi ideology to defend Jim Crow. Segregation depended on the mob violence and vigilantism of the Klan and other white supremacist militias to maintain control.

As the Civil Rights movement picked up speed in the 1960s, so did the racist resistance. Confederate flags went up on state capitals for the first time since the Civil War, civil rights volunteers were beaten and murdered. Elected officials of the segregationist Democratic Party of the time gave tacit support to the “lynch law” that operated in the shadows.

In our time, Donald Trump has elevated an avowed supporter of the alt-right, Steve Bannon, to a senior post in the White House. Bannon whispers alt-right notions in the President’s ear, retweets their conspiracy theories and echoes their talking points.

So what better way to embarrass and defeat white extremists than to renew the Voting Rights Act, expand the franchise, ensure everyone can vote and that every vote counts?

Groups like Virginia Organizing help people navigate the complex process to regain their right to vote, but it should be a lot easier.

Full restoration of voting rights would be an important step towards making Virginia a more equitable state where all the people have power over policies affecting their lives.

People’s organizations, armed with the peaceful power of the vote, can take back statehouses in Virginia and all across the country from the GOP, reversing the agenda they share with helmeted cowards and domestic terrorists.

Wouldn’t that be the sweetest revenge?