Love Your Country? Save Health Care!

Senators are home to celebrate Independence Day this week. Don’t let them go back to D.C. without hearing how important saving health care is to our country.

We have one more chance to stop the GOP’s health care repeal before it sickens, bankrupts, and even kills many of us. Remember: grassroots pressure works. 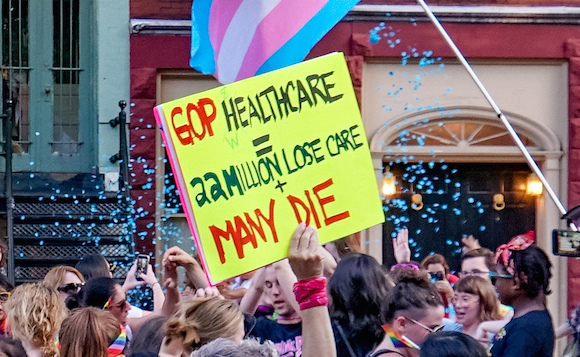 Here's how we can make our voices heard:

Visit your senators at their local offices. Tell them why you oppose health care repeal and believe every person should get health care.

Attend a health care rally or protest in your community.

Find your senators at an Independence Day parade and wave your “no health care repeal!” sign.

Call your senators’ local offices every day. Talk to your family and friends during the holiday and ask them to call every day, too!

Senate Majority Leader Mitch McConnell then drafted a bill in secret and wanted to rush it through, but is unable to muster enough support from his party, so has had to delay a vote.

But repeal is still at the top of the GOP’s agenda, so let’s keep the pressure on.

Here’s a reminder of what the Senate’s repeal legislation does:

Kicks 22 million people off health care in less than decade.

Slashes 35 percent of the Medicaid budget by 2036, cutting health care for more than 70 million people, threatening nursing home coverage for us and our parents, and forcing people with disabilities from their homes.

Brings back lifetime and annual caps on care, cutting off everything from chemotherapy to post-surgery recovery care.

Raises our health costs while making our insurance cover less, raising deductibles to a jaw-dropping $6,000.

Trades away our health care to give massive tax break to the ultra-rich, drug corporations, and insurance companies.

Starves state budgets of funds needed not just for health care but also for education, roads, and other needs.

The GOP's Next Move

There’s only one way to pass a terrible, unpopular piece of legislation like this: offer side deals to wavering lawmakers.

As one Trump administration official put it bluntly, “I really think they'll bribe off the moderates with opioid money and then actually move policy to shore up Mike Lee and Ted Cruz.”

Lee and Cruz are the two extremist GOP senators who once forced a 16-day shutdown of the Federal government to stop the Affordable Care Act from taking effect. Now they're doing everything they can to gut the legislation so many lives depend on.

In coming days, McConnell will dip into his “slush fund” of $188 billion to offer side deals to undecided Republicans, like Sen. Susan Collins of Maine and Sen. Shelley Moore Capito of West Virginia, to win them over. He might offer to fund opioid treatment or phase in Medicaid cuts more slowly. But the goal of the repeal - to cut out the heart of health care for millions of people - remains the same.

As Republican leaders revise their repeal and try to sell it to the public, keep a few things in mind:

No amount of side deals will soften the cruelty of this bill. For example, West Virginia’s uninsured rate will quadruple under the Senate bill, taking health coverage away from 20 percent of the state’s non-elderly adults. Cutting their health care more slowly or adding dollars for opioid treatment won’t stop the devastation wreaked by gutting Medicaid.

Every person in our country should get health care

If Republican lawmakers really cared about our health, they could make make care more affordable and more available. They could open Medicare to everyone, breaking the insurance companies’ stranglehold on coverage. They could also require Medicare and other programs to negotiate lower prices from drug corporations.

Whatever it promises in the short term, this bill still violates the promise of better, more affordable health care for all. Real fixes are available. Our lawmakers know this. This Independence Day, let's make sure they know that we know this, too.