Donald Trump’s FY 2018 budget is, the White House admits, a “message document” -  at best, a marker to begin negotiations. So what is the message this White House is sending?

First, it raises a long, fat middle finger pointed at the working class voters who helped to put Trump in office. For them, this budget isn’t a con job; it is a stunning betrayal.

Second, it constitutes a wet kiss for House Speaker Paul Ryan and right-wing Republican efforts to reward the rich and punish the poor. 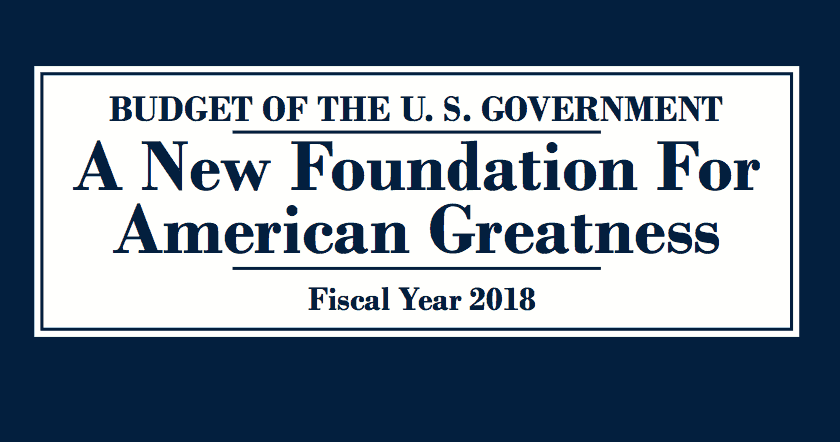 It even recycles the transparent lies that are standard Ryan fare – that top-end tax cuts will pay for themselves, that a budget that slashes taxes, raises money on the military, protects Social Security and Medicare will magically end up balanced in 10 years, that giving the rich more money will produce jobs and the poor will benefit from reversing efforts to assist them.

Senator John Cornyn, the second ranking Republican in the Senate has called the budget, “dead on arrival.” Its savage cuts even earned a rebuke from the House leader of the hard-right Freedom Caucus, Rep. Mark Meadows, who objected to eliminating “Meals on Wheels.”

Trump released his budget while he was on the other side of the world, suggesting he wanted to distance himself from its betrayal of his working class supporters, were he capable of shame. The elements were already exposed in his “skinny budget,” this document just provides more detail, but the detail itself is shocking. Medicaid is savaged, cut nearly in half by the end of the 10 years.

Millions of lower income workers and their families will be deprived of health care. Their kids will go to public schools without pre school, with fewer resources and fewer after school programs. They will find college less affordable and training less available. Their families will suffer from fouled water and and air. Those struggling with the opioid epidemic will get less treatment. Women will find health care services less available.

Workers at Wal-Mart, fast food and other lower wage employers will be stripped of the food stamps and tax credits that help them make ends meet. The $1.7 trillion in domestic spending cuts will eliminate rural development programs, and ravage farm subsidies. Cuts in workplace safety and enforcement against wage theft will leave more workers injured on the job and more gouged by crooked employers.

Trump turns his promise of a $1 trillion, 10-year bipartisan jobs program into a joke. In the first year, his budget cuts more investment in infrastructure than the $5 billion it adds. The total spending over 10 years averages a paltry $20 billion a year; the rest goes to bribes “incentives” for private investors.  That insures that working families will get it in the ear – beginning with Trump’s call for charging tolls on existing free interstate highways. Eisenhower would be turning in his grave.

Senator Bernie Sanders, the senior non-Republican on the Senate Budget Committee, railed at the betrayal, wondering out loud to reporters how Republicans would justify this budget to their supporters:

"Yeah, I just voted for incredibly large tax breaks for billionaires. Oh, by the way, we’re going to cut Head Start and child care and after-school programs and health care and education!"

With the betrayal comes the full package of Republican lies and hypocrisies.White House talking points say the budget replaces “dependency with the dignity of work.” “We looked at this budget through the eyes of the people who are actually paying the bills,” said Trump’s noxious OMB Director Mick Mulvaney.

But a budget that cuts education and training, science and technology, burlesques infrastructure investment, and savages programs that make work pay – from food stamps to the Earned Income Tax Credit to child tax subsidies – will leave workers with more dependence and less dignity.

Based on this budget, billionaires are far more rapacious than even Bernie Sanders suggests. It will give them millions in tax breaks at the cost of throwing millions off of health care, cutting education and college assistance, home heating, Meals on Wheels, aid to the disabled, support for schools and college.

The budget parrots Ryan's fantasies about reaching a balanced budget. But the lies about balanced budgets are far less important than the reality of how this budget plans to use the money.

The Trump-Republican Congress priorities will supercharge current trends. The military will be our only industrial program. Leadership in renewable energy and energy efficiency – the growth global markets of the next years –will be squandered. Our edge in science and technology abandoned.

Our infrastructure will grow ever more dangerous and decrepit, even as profiteers lay on pervasive “user fees.” America will grow more unequal; its working people with less opportunity and declining longevity.

Trump’s extreme cuts won’t pass, but don’t dismiss this budget. In essence, Trump not only shafts his supporters, he gives the Republican right-wing Congress, led by House Speaker Paul Ryan, an open door to do extreme damage.

Republicans can now parade as moderates compared to Trump, even as they savage America’s prospects, succor the rich, and add to the burdens on workers and the poor. Democrats will seek to the limit the damage. But this budget, in the hands of this Congress, ensure that damage will be done.