Thousands of demonstrators marched on Saturday to demand that Donald Trump release his tax returns. But, barring an unexpected surprise – a W2 form issued by Vladimir Putin, or a 1099 from mafia boss Anthony 'Fat Tony' Salerno – we already know Trump’s ugliest tax secrets. We will reveal those secrets…

… right after this break.

Many readers will recognize this reference to Rachel Maddow’s televised release of Trump’s 2005 tax return, The MSNBC host kept her viewers in suspense for a total of 84 minutes before learning that Trump paid an effective federal tax rate of 24 percent that year. That was considered an anticlimax. It even led some observers to speculate that Trump might have leaked the return himself, since many people had assumed that Trump hadn't paid any federal taxes at all for years.

That gets us to Trump’s first terrible tax secret: his tax return for that year was not unusual. Few wealthy individuals pay the official rate, which is currently 39.5 percent, even though the rich have never been richer at any point in this country’s history. Mitt Romney, for instance, released a tax return during his presidential run, which showed he paid just over 14 percent in 2011, and that year may have been chosen because others were even more embarrassing.

Over the years, lobbyists have worked to fill the tax code with giveaways for wealthy individuals and corporations. The resulting loopholes make it very rare for any individual or corporation, no matter how prosperous, to pay anything close to the top rate.

Given the eagerness of the rich to avoid paying their official rate, you might think that rate is excessive. But the top marginal tax rate in this country is much lower than it’s been for most of the last century, despite today’s extreme concentration of wealth at the top: 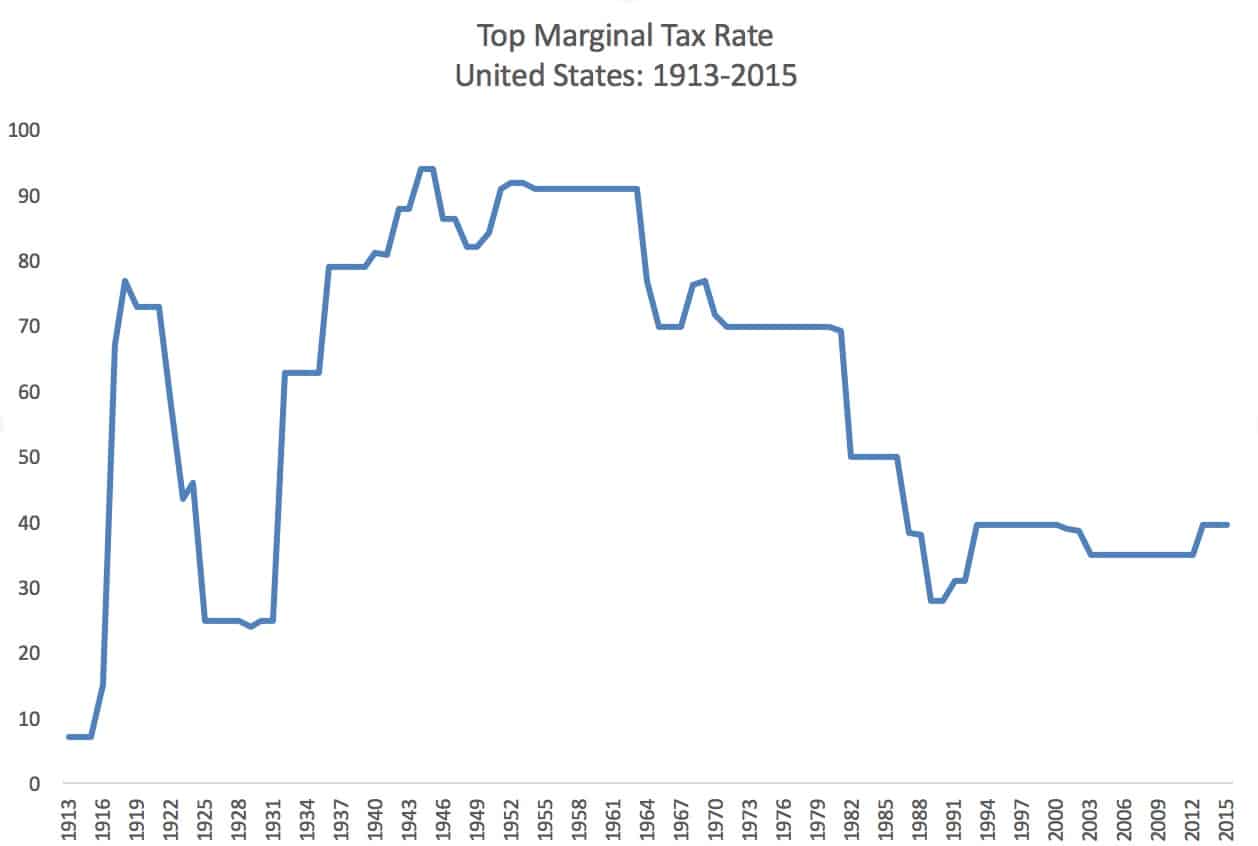 Although the official rate is only slightly more than one-third of its highest levels, an entire industry has been formed to help the wealthy avoid paying it. (This story shines a light on one small corner of that industry.)  As James Kwak points out, Warren Buffett – who uses his vast wealth for philanthropic purposes, unlike Trump – takes advantage of today’s tax code on a much larger scale than Trump does.

Trump’s second terrible tax secret is one he shares with the entire Republican Party: Instead of being grateful toward the country that has allowed them to accumulate such wealth, Trump and the GOP are willing to let people die for an additional tax cut.  They were willing to deprive millions of people of health insurance in order to repeal a 3.8 percent tax on investment income and a tax of less than one percent on high wages. More on that here.

Trump’s third tax secret? The attack on the Affordable Care Act is just the start of tax clawbacks. His tax plan represents a massive tax giveaway to his billionaire friends and associates, and to corporations that are also paying far less than their official tax rate. Americans for Tax Fairness examine the injustice behind Trump’s tax plan, including the fact that it would raise taxes on roughly 9 million families while lowering the top tax rate even more.

The Trump/GOP assault on the estate tax, for instance, is a giveaway to America’s aristocracy. Trump’s even trying to eliminate the biggest tax he pays personally – the alternative minimum tax.

The fourth secret is this: Trump and his party don’t believe in progressive taxation at all. As I wrote recently, Trump Budget Director Mick Mulvaney recently suggested that he preferred to let the ultra-wealthy “keep their money” – an extremist and inaccurate framing that is well outside the mainstream of both Republican and Democratic thought over the last century. They especially dislike the idea of taxing billionaires to help people in need.

The fifth and final secret is this: Trump and his billionaire friends get away with paying low or no taxes because the rich have far too much influence over our political system. In fact, as political scientists Martin Gilens and Lawrence Page found in a 2014 study, “economic elites and organized groups representing business interests have substantial independent impacts on U.S. government policy, while average citizens and mass-based interest groups have little or no independent influence.”

In other words, the wealthy in our country almost always get the policies they want.

In a response to their critics, Gilens and Page wrote, “The affluent are, not surprisingly, (even) better at blocking policies they dislike than achieving policy change they desire. When a policy is strongly opposed by the affluent… that policy is adopted only 4 percent of the time.”

But that’s no reason to quit. Americans have overthrown oligarchies before, most notably at the end of the era Mark Twain described as “the Gilded Age.” We are, by any reasonable definition, going through a second Gilded Age today.

You don’t need Donald Trump’s tax returns to know that we need a more just tax system, one that calls upon the wealthy and corporations to pay their fair share. What’s more, the fight for fair taxation is inseparable from the fight against oligarchical wealth. That’s more reason to keep fighting.

Donald Trump tweeted that “someone should look into who paid for” the “small” rallies demanding that he release his tax returns.

The real question is, who pays for all the tax breaks that are given to people like Donald Trump?

The answer is, we all do.