On Thursday, People’s Action was pulling out all the stops to defeat Republicans' plan to repeal health care on the anniversary of the Affordable Care Act (ACA) – and preparing to take the fight to the Senate. Come Friday, we celebrated a stunning victory for community organizing, and the popular resistance organizers have stoked since the election. Now, we are gearing up for the fight ahead. 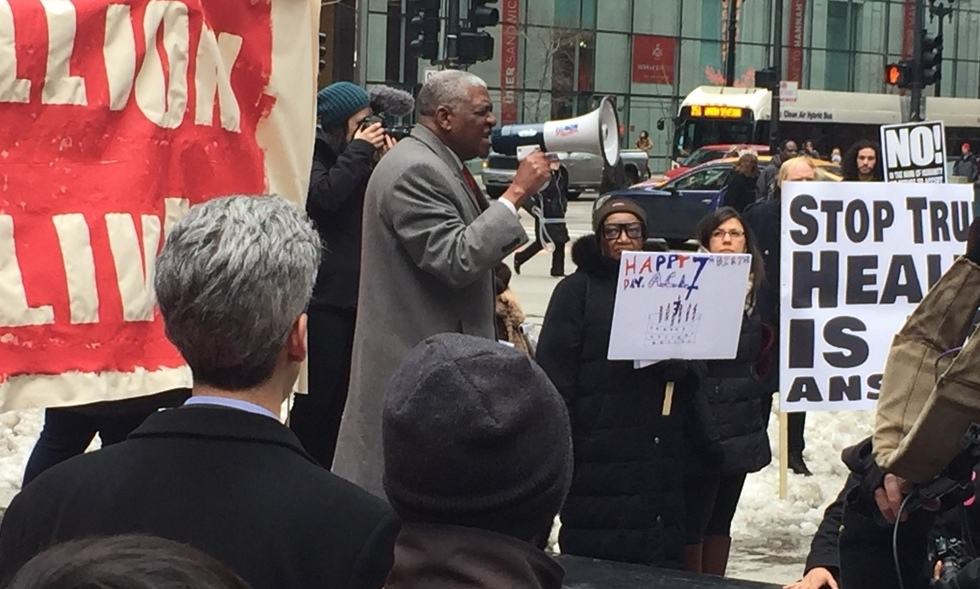 Following last November’s Presidential election, People’s Action and our member and affiliate organizations – many of which had fought for passage of the ACA through the Health Care for America Now (HCAN) campaign – came together to strategize.

By December, the HCAN coalition had reconvened, determined to protect what we’d won seven years ago, accepting that we’d have to wage a defensive fight on our way to winning health care for all. But, as we set out to save what we could, we were far from overconfident and feared we could lose decades of progress.

We knew Republicans intended to go much farther than repealing the ACA. The right wing of the party had long set its sights on Medicaid and Medicare. And, with Republicans about to take control of both houses of Congress and the presidency, we also knew we’d have to raise an unstoppable wave of resistance focused on moveable Republicans in the House and Senate.

As ambitious as that goal was, we achieved it. The importance of the firestorm we lit nationwide hasn’t been lost on the pols and pundits, who have credited popular outrage with putting centrist Republicans in the “no” camp, or preventing them from committing to a record-blotting "yes."

The more House Speaker Paul Ryan and Donald Trump caved to the ultra-right Freedom Caucus, the more it mattered that we had peeled away the centrists.

Our resistance to the Trump-Ryan-McConnell agenda has scored its first legislative victory – on the right’s top priority, and well within the first 100 days of the new administration.

We’ll be sharing more in the coming days, but here are the preliminary thoughts on how we were able to put our victory over the top.

Getting Out Early and Setting the Tone

By mid-December, we started pulling out all the stops, knowing we needed not only to block a historic assault on health care, but also to set the tone for all our upcoming fights against the GOP and Trump’s agenda of hate, exclusion, and exploitation.

Before the holidays, we launched our first round of protests – and kept ratcheting up the pressure from there, with People’s Action affiliates holding or supporting 292 protests, events, or other actions that helped score "no's" in Nevada, New Jersey, New York, Pennsylvania, Virginia, and Washington.

We also rang the alarm about the radical nature of Republican plans – and discussed our alternate vision, including opening Medicare to all and negotiating lower prices with drug corporations.

Keeping a Spotlight on Medicaid

From the start, we knew that the Republicans weren’t gunning just for the ACA – they also wanted to destroy the entire Medicaid program. The attack on Medicaid raised the stakes enormously for us, unmasking the Republican plan as an act of class warfare and a racial injustice perpetrated on struggling people.

We made sure to talk not just about ACA repeal but the repeal of our health care generally – drawing attention to the difference Medicaid expansion has made in the communities that Trump and our congressional targets are supposed to represent.

In the end, many of the centrist no’s – and others who wavered – specifically cited the cuts to Medicaid as a cause for concern. On Sunday, Rep. Charlie Dent, who Keystone Progress bird-dogged as he and three other Pennsylvania congressman lunched with the Chamber of Commerce – again discussed Medicaid on “Meet the Press."

Zeroing In On Our Targets

We gave these elected officials no space to maneuver. Our grassroots leaders bird-dogged them before, during, and after the February #ResistanceRecess, with increasingly aggressive tactics, armed with tough questions and informed on how to decode their buzz phrases.

New Jersey Citizen Action persisted with Rep. Leonard Lance with regular Wednesday vigils at multiple district offices, an empty-chair town hall event, a report release followed by a second town hall, with vigils, rallies, and a canvass to finally pin him to a "no."

Bringing In Lots of Voices

At its fore, our campaign was led by grassroots leaders who spoke up about how much they stood to lose with repeal. But groups also reached out to bring in other voices.

Our groups mobilized longtime members but also lent a hand to newly-inspired activists who wanted to take action locally, tailoring support to the needs of these emerging organizations.Citizen Action of New York hit Rep. Dan Donovan’s office early with Metro New York Health Care for All.

CANY then also worked with two of Donovan’s constituents – founders of a new group called “Fight Back Bay Ridge” – to organize a 300-person protest at the congressman’s office and move him to “no” on repeal.All this pressure added up as we slowed the gears of repeal.

The tipping point came when Rep. Rodney Frelinghuysen – chair of House Appropriations and the target of New Jersey Citizen Action and NJ 11th for Change’s persistence – finally came out against the bill on Friday, March 24. Not long after, Ryan and Trump caved and pulled the bill.

Fending off the health care repeal is a huge win that will save lives. But the significance of the victory doesn’t stop there. The attack on health care brought out both seasoned and new activists who now see the fruit of their persistence, and who have become politicized in a new way.

It also shakes the confidence of the Administration, which has a lot more on its agenda.

Many thanks to leaders and staff of People’s Action affiliates, HCAN and our partners for their determination to speak truth and commitment to our belief that health care is a human right.