President Trump came to Nashville to peddle the Republicans’ disastrous plan to cut health care for millions of Americans. Tennesseans responded to this con with a resounding, "No!" 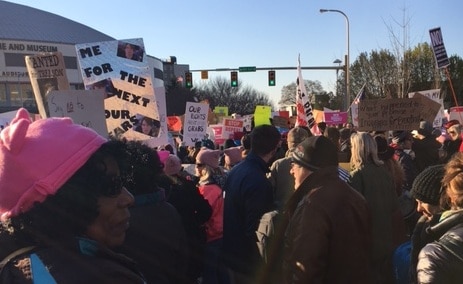 More than 2,500 of us – organized by a coalition including Tennessee Citizen Action (TNCA), the Tennessee Immigrant and Refugee Rights Coalition, Nashville Indivisible, Planned Parenthood and others – marched from Nissan Stadium and other locations, converging on Municipal Auditorium, where Trump planned a campaign-style rally.

There, Tennessee Citizen Action called on Trump to drop the repeal plan and demanded that our Republican senators, Lamar Alexander and Bob Corker, vote against it.

“My husband runs a small business and we wouldn’t have been able to open that business if we couldn’t have gotten coverage through the Affordable Care Act,” said Kat Wright, a TNCA leader from Nashville. “I can’t believe they want to pull out the rug from under so many people like this. It’s so cruel.”

In January, Trump promised, “ We’re going to have insurance for everybody.” While campaigning, he also swore he wouldn’t cut Medicaid. But the Congressional Budget Office recently analyzed the Republican healthcare repeal legislation. Their numbers show Trump lied.

TrumpCare would push 24 million people out of health care by 2026, the CBO says. Fourteen million of those will lose Medicaid.

These numbers are staggering, because the GOP bill repeals much of the ACA – but also cuts much deeper, essentially ending the entire Medicaid program as we know it. TrumpCare will replace funding that matches health care needs with capped funding, slashing $880 billion, or a quarter of the program’s funding.

That amounts to a death sentence for the thousands of Tennesseans who will lose coverage. More than 500,000 of us have health care thanks to the Affordable Care Act (ACA), which TrumpCare would repeal. And 1.5 million of us get coverage through TennCare, our state’s Medicaid program – also on the chopping block if the repeal passes.

In Tennessee, our state lawmakers chose not to expand Medicaid under the ACA as they could have. But Medicaid is still a lifeline for families across the state – families that now stand to lose everything.

Rural counties will be especially hard hit. More than one thousand residents of Pickett County are covered by TennCare. That’s in the most rural county in the state, with a population of just over 5,000. It’s the same story in Perry County, with 2,149 people enrolled in TennCare as of February and a population of about 8,000.

These Tennesseans now face an increasingly uncertain future because of this health care repeal bill, and they’re not alone. You can’t take health coverage away from 20 or 25 percent of a county’s residents and think the devastation will stop at their doorstep. The local doctors’ offices will feel it. The businesses in town will feel it. The schools will feel it.

That scares and angers TNCA leader Bonnie Nelson. Her daughter has a rare genetic condition and was able to get health coverage thanks to the ACA.

“President Trump is lying and Congress is lying,” said Nelson. “TrumpCare will penalize people like my daughter. If she ever loses her coverage, what will happen if she can’t get back on?”

Bonnie and the other TNCA leaders are proud of the greeting of resistance we gave Trump in Nashville. We’re also proud of our amazing show of solidarity with the groups that organized and joined together for the protest. 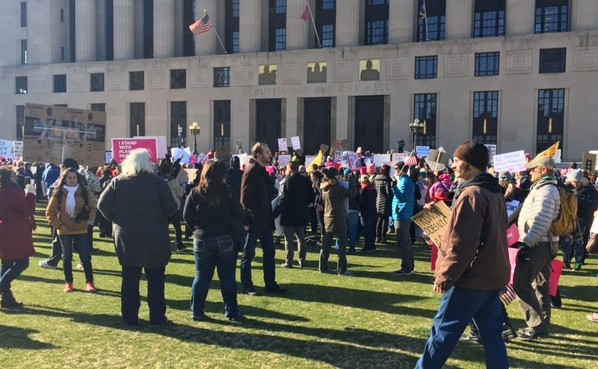 The Tennessean reported on the diverse nature of those who gathered, and the variety of issues they addressed:

Karla Barde, a retired first-grade teacher from Franklin, said she was worried about the state of public education, health care and freedom of the press under the Republican agenda. Craig Mathews, a 68-year-old Vietnam War veteran, said he was offended by Trump’s remarks denigrating Sen. John McCain, a former prisoner of war.

In his address, Trump moved from talking about his Muslim ban 2.0 right to his plan to repeal our health care. We see the connection, too. Trump just doesn’t care about people, our lives, or our communities.

Fortunately, Wednesday was a bad day for Trump – and a good day for people. A federal judge blocked Trump’s Muslim ban 2.0. And we continued to stoke our firestorm against the repeal of our health care and will keep on fighting.

Tennessee is known as the Volunteer State, and I'm thankful we turned out in force to show Trump that together we will resist this destructive agenda.

Andy Spears is the Executive Director of Tennessee Citizen Action