When Republican candidate Donald Trump says we should keep jobs in the U.S., he doesn't mean what people think he means. He wants to make the U.S. just as low-wage as elsewhere, to be "competitive." Members of Michigan People's Campaign were among those in Detroit who disrupted what was billed as a major economic policy speech Monday to ask him about this and about his treatment of women.

Trump talks about job losses from trade. Sounds good, right? But the billionaire businessman's "solution" is to make wages low enough here that companies don't move there. Jobs, maybe, but at what price?

A year ago Donald Trump, talking about trade, said auto companies should move production from states like Ohio and Michigan to low-wage, anti-union states. He said that after a few plants move (and people lose their livelihoods and their communities are destroyed), then the companies will have leverage to "make good deals" that bargain working people's wages and benefits down to the point where companies don't seek non-U.S. alternatives.

The Detroit News reported this in August, 2015, in "Trump suggests moving some car production from Michigan":

He said U.S. automakers could shift production away from Michigan to communities where autoworkers would make less. “You can go to different parts of the United States and then ultimately you’d do full-circle — you’ll come back to Michigan because those guys are going to want their jobs back even if it is less,” Trump said. “We can do the rotation in the United States — it doesn’t have to be in Mexico.”

He said that after Michigan “loses a couple of plants — all of sudden you’ll make good deals in your own area.”

Got that? Trump says companies shouldn't have to move jobs and factories out of the country to get low wages; he says they can pit states against each other in a "full-circle" race to the bottom, making wages here just as low as they are there. Then companies won't want to move there because wages are just as low here.

Trump doesn't want to end the race to the bottom, he wants to accelerate the race, getting us to that bottom ASAP – right here in America. He says we need to stop "punishing companies" and "forcing jobs out of our communities" by asking companies to submit to health and safety regulations and pay taxes and good wages.

Some people in Michigan understandably have a few questions about Trump's plan to drive their state's wages and working conditions down to make Michigan "competitive" with Mexico and China. It turns out they don't particularly prefer that their jobs get outsourced to Alabama instead of Mexico or China. So Monday they took those questions directly to Trump. 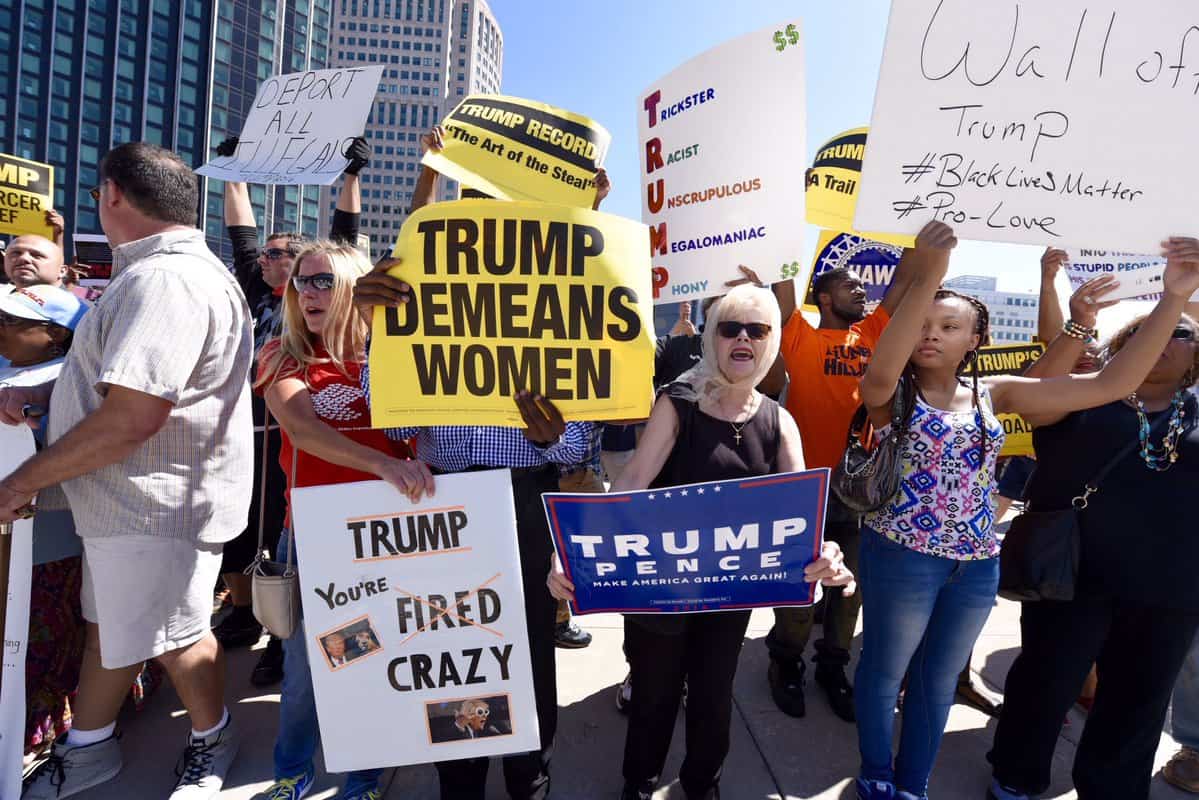 Photo by Lynn Cain on Twitter. She also tweeted, "Stop mentioning #Taxes when you won't release yours."

From the first minutes, members of Michigan People’s Campaign disrupted Donald Trump’s Detroit "economic" speech. They stood up and asked him questions about his policies on moving Michigan's auto jobs out of the state, and about his positions on sexual harassment.

According to a Seattle Times report:

One at a time, women seated throughout the audience stood up and yelled “Mr. Trump,” but their continued shouts were quickly drowned out by boos as security led them from the room. An organization called the Michigan People’s Campaign is claiming responsibility. It was hard to hear the women, but the group says they were yelling at Trump about jobs and his comments on women.

For example, one Grosse Pointe Woods autoworker shouted, "You want to close Michigan plants and outsource our jobs!" She stood on her chair and asked, "How are we supposed to raise our families without good jobs? Is that what you call winning?"

They didn't get any answers.

According to at least one report, the protesters were "mostly women." "One boomed about 'victimized' females; another blared: 'You have to answer to women, Mr. Trump!' "

The protesters also wanted answers from Trump about his treatment of women. Trump has made multiple comments disparaging, denigrating and insulting women on the campaign trail – many of them unrepeatable. Fox News anchor Megyn Kelly asked Trump at a Republican debate about him calling women names like "fat pigs … dogs, slobs and disgusting animals." That led to a particularly bad comment by Trump about Kelly herself.

The Daily Beast reported that Trump recently defended Fox News CEO Roger Ailes after Ailes was accused of multiple counts of harassment of female employees, saying, "He helped these women."

Then Trump started attacking the women who had come forward. “I can tell you that some of the women that are complaining, I know how much he's helped them," he said.

One Detroit protester shouted the question, "Why are you blaming the victims of sexual harassment? .. Why shouldn’t women be safe at our work? It’s not our fault!"

Trump's son Eric recently said his sister Ivanka (daughter of a billionaire) would not "wouldn’t allow herself to be objected [sic] to" sexual harassment and that "as a strong person" she would "take it up with Human Resources" rather than take the complaint elsewhere.

A daughter of a billionaire might not "allow herself" to be sexually harassed, but what about working women – including top-rated news anchorwomen?

If Trump denigrates women the way he does in public, imagine how he is alone in a room with women. A May New York Times report, "Crossing the Line: How Donald Trump Behaved With Women in Private," sought to answer that question:

“That must be a pretty picture, you dropping to your knees,” he told a female contestant on “The Celebrity Apprentice.” Rosie O’Donnell, he said, had a “fat, ugly face.” A lawyer who needed to pump milk for a newborn? “Disgusting,” he said.

[. . .] The New York Times interviewed dozens of women who had worked with or for Mr. Trump over the past four decades, in the worlds of real estate, modeling and pageants; women who had dated him or interacted with him socially; and women and men who had closely observed his conduct since his adolescence. In all, more than 50 interviews were conducted over the course of six weeks.

Their accounts — many relayed here in their own words — reveal unwelcome romantic advances, unending commentary on the female form, a shrewd reliance on ambitious women, and unsettling workplace conduct, according to the interviews, as well as court records and written recollections. The interactions occurred in his offices at Trump Tower, at his homes, at construction sites and backstage at beauty pageants. They appeared to be fleeting, unimportant moments to him, but they left lasting impressions on the women who experienced them.

What happens when you press Donald Trump on his positions to cut wages and benefits and his positions against women? In Detroit some people tried. They were "escorted out." So far, we haven't heard any answers.