This Week Is Infrastructure Week, But Every Week Should Be

Flint, Michigan is this year's face of the infrastructure problem: Flint's (and many other cities') outdated water systems are literally poisoning people. All around us we see bridges and roads that are in (really) bad shape, aging and failing rail transit systems, traffic jams everywhere, power outages – problem after problem. Our country's infrastructure is in bad shape and rapidly getting worse.

But we can't get our own government to spend the necessary money to fix the problem.

More than 150 organizations are participating in Infrastructure Week 2016 this week. The website explains that this is "a national week of events; media coverage; and education and advocacy efforts to elevate infrastructure as a critical issue impacting all Americans."

But at CAF every week is infrastructure week because we have been on our soapbox shouting to the rafters about this for quite some time.

To help kick off the week, The Hill looks at "Five big infrastructure emergencies," The Brent Spence Bridge connecting Cincinnati and Covington, Ky., Washington D.C.’s Metrorail system, the Gateway Rail Tunnel project between New Jersey and Penn Station in New York City, the I-10 Bridge in Southwest Alabama over the Mobile River and the San Francisquito Creek bridges in Palo Alto, California.

These are representative of the hundreds, if not thousands, of infrastructure emergencies nationwide, but are hardly the worst examples.

So how bad is the problem? The following chart is from "As Roads Crumble, Infrastructure Spending Hits a 30-Year Low" by Eric Pianin in The Fiscal Times this February, 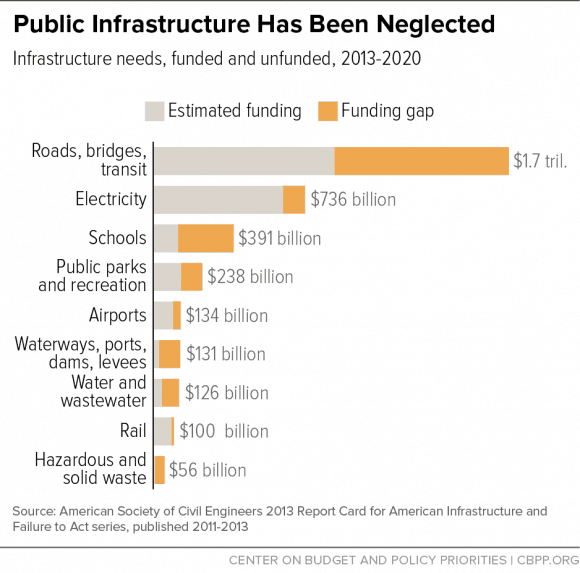 The American Society of Civil Engineers (ASCE) has issued a new report titled, "Failure to Act." Our Isaiah J. Poole wrote on Friday about "The $3,400 ‘Tax’ You’re Paying That The Media Decided Not To Talk About":

That is the money that the American Society of Civil Engineers this week said in its latest “Failure to Act” report that each U.S. household is losing “each year in disposable income due to infrastructure deficiencies.” Seen another way, each family pays a $3,400 annual tax for what federal, state and local governments don’t spend to properly maintain and expand our transportation, water and electricity networks.

Not adequately investing in infrastructure is costing the economy more than three times more than what it would cost to bring these systems up to a state of good repair. ... what we should be spending between now and 2025 would take about $1.4 trillion, the ASCE says. The cost of not spending that money, according to the ASCE? Almost $4 trillion. With that loss comes the loss of 2.5 million jobs.

... According to the report, more than 40 percent of buses and 25 percent of rail cars are in marginal or poor condition.

● Democratic presidential candidate Sen. Bernie Sanders "has already proposed a plan that would commit the nation to closing most of that $1.4 trillion infrastructure investment gap in the next 10 years."

● "So does the People’s Budget introduced by the Congressional Progressive Caucus earlier this year."

● "Hillary Clinton has a far less expansive proposal, but it would be a significant step above where the nation is now."

● Presumptive Republican nominee Donald Trump, "said in a December debate that 'the $4 trillion” the U.S. spent “trying to topple various people' could have been spent 'in the United States to fix our roads, our bridges … our airports and all of the other problems we’ve had.'

Ironically, Trump's own proposals to cut taxes guarantee that if elected he cannot meet his promise to spend on infrastructure. But he is not alone in this.

The country has put off keeping the infrastructure in good repair since the "Reagan era" ushered in the Republican "starve the beast" tax and spending cuts of the 1980s when Republicans said, "Hey look at this big pile of seed corn. Let’s eat it!"

Since then, the Republican Party is ideologically locked into anti-tax, anti-spending and general anti-government policies.

Today, "Tea Party" Republicans are committed to obstructing anything they consider to be "government spending" regardless of what it is for. (Unless, of course, it is for military adventures.) They say infrastructure money is really just "pandering to unions" or a "union bailout" or a "union payoff."

They have been at this for a long time. From 2013's "Economic Sabotage: Republicans Obstruct Infrastructure Work":

The kook right (perhaps that should read “Koch right”) that really “leads the charge” for Republicans these days says "Infrastructure Spending Is Not the Federal Government’s Business" or that infrastructure spending is just more “big government.” Heritage Foundation claims here that government spending on infrastructure “takes money out of the economy.” Some of the (Koch-funded) kooks even actually claim that investing in infrastructure hurts the economy.

The Chamber of Commerce is one of the leaders of Infrastructure Week, asking Congress to approve increases in spending on maintaining and modernizing our infrastructure. But the Chamber has helped elect the Tea Party Republican majority that pushes for tax cut after tax cut, and which opposes this spending and wants to send the responsibility back to the states. And many of the companies belonging to many of the organizations sponsoring Infrastructure Week, like the Chamber, themselves dodge paying the taxes that could fund infrastructure projects.

Work That Needs To Get Done When People Need Work

Finally, from the post "The Infrastructure Cure For The Economy":

Everyone understands that our (and the world’s) economy is underperforming. While U.S. unemployment is down, people are finding jobs that underpay and/or don’t provide enough hours. Regular people just don’t have enough to get by – never mind enough to drive consumer economies. The lack of pay causes a drop in consumer demand, which leads to economic malaise.

Economist Joseph Stiglitz puts it clearly: “The only cure for the world’s malaise is an increase in aggregate demand.”

So how do you increase demand in an economy? With jobs that pay well. How do you get jobs to pay well? ... [M]ake sure there are plenty of jobs. When there are so many open jobs in an economy that employers start having trouble finding people to work for them, they start to offer better pay.

How do you make sure there are enough jobs in an economy? The way that has again and again proven to work is through the government hiring people to do work that needs to be done.

● The country desperately needs to repair and modernize infrastructure.

● Interest rates are extremely low. The markets are practically demanding that the government issue bonds, and these bonds can pay for the needed infrastructure work.

● Infrastructure work hires people and boosts suppliers, boosting the economy even before these efficiencies take hold.

Let's do the work that needs to be done.