As Verizon Strike Continues, What Are Candidates Saying? 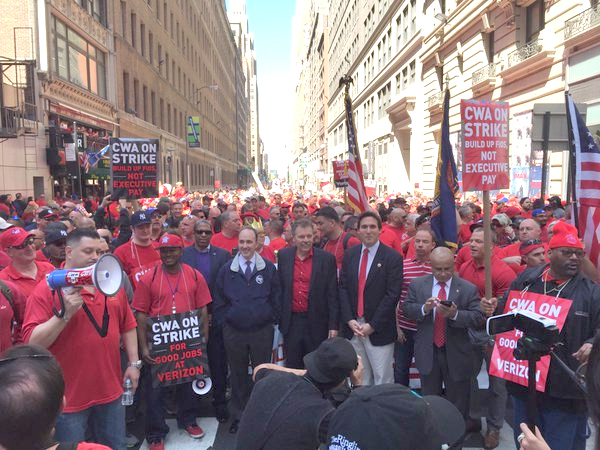 40,000 workers at Verizon and Verizon Wireless are still on strike, fighting for their future and the future of middle class wages in our economy. Despite making $131.6 billion in annual revenue, Verizon refuses to sign a contract with its workers.

The workers want job stability, acceptable working conditions and respect as human beings. The company wants the “flexibility” to be able to change workers days and hours at will, do even more outsourcing, make workers do more to make up for their desire to employ fewer people, and generally treat human beings as commodities.

Verizon CEO Lowell C. McAdam will receive more than $18 million in compensation just this year. Verizon executives are paid up to $20,000 an hour. Yet they argue that base pay of $13.48 an hour is enough for Verizon's workers to support a family. This is not right for Verizon's workers or for our economy.

Sign your name to add to the pressure on Verizon to agree to a contract.

This is a bigger fight than just Verizon's workers being asked to take less by an enormous and enormously profitable corporation. There is a larger fight between most of us and our corporate-dominated economy that looks only at what benefits corporations, their executives and shareholders and not the rest of the stakeholders in our economy. Work hours, pay, stability, benefits, even product quality and support, all are sacrificed to further corporate profits and “flexibility.” If you are not a wealthy executive or major shareholder, your life just gets harder and harder, and you have fewer and fewer rights and options.

Candidates On The Verizon Strike

When the strike began, Democratic presidential candidate Bernie Sanders joined a picket line and addressed a rally. This week he sent a message to supporters that reads in part:

The CEO of Verizon makes almost $20 million a year in compensation. He leads one of the most profitable companies in the country.

I'm asking you today to stand up and tell the CEO of Verizon that you think Verizon employees deserve a fair contract that protects health benefits, guarantees fair pay, and stops outsourcing. Click here to add your name in support of Verizon employees.

Last week Hillary Clinton visited strikers outside a Manhattan Verizon store and Bill Clinton joined a Verizon picket line in Buffalo, N.Y. Reuters reports:
"'This has been going on for months,' she said of the deadlocked contract talks, adding that the employees needed all the support they could get." Her campaign issued a statement that says in part,

“I am disappointed to learn that negotiations have broken down between Verizon and their workers, represented by the Communications Workers of America and the International Brotherhood of Electrical Workers. Verizon should come back to the bargaining table with a fair offer for their workers. To preserve and grow America’s middle class, we need to protect good wages and benefits, including retirement security. And we should be doing all we can to keep good-paying jobs with real job security in New York.

“Instead, Verizon wants to outsource more and more jobs. That would mean walking away from workers who have been part of their family and our communities for years – the workers who install and repair our phone and cable service, and who respond to customer needs day and night. We rely on these men and women as part of the communications infrastructure that keeps businesses and our economy moving. Verizon should do the right thing and return to negotiations...

However, in May 2013 Clinton received $225,000 in "speaking fees" from the company. Also, three Verizon vice presidents have donated the maximum of $2,700 to her campaign, a senior vice president and another vice president donated $1,000.

An editorial in the New Jersey Star-Ledger begins:

In a parking lot near Syracuse last Friday, Verizon CEO Lowell McAdam, who makes $18 million a year, walked up to a picket line and said to his striking workers, "To be honest, I'm not sure why you're out here."

It was an illuminating snapshot of the disconnect between a corporation and its employees, all caught on video, and it illustrates how even a tech titan built on recognizing consumer behavior can't grasp the basic needs of its own workforce.

If you want to support striking workers on the picket line you can find one near you here: StandUpToVerizon.com.