Silicon Valley Rising Fights To Give Part-Timers "Opportunity to Work" 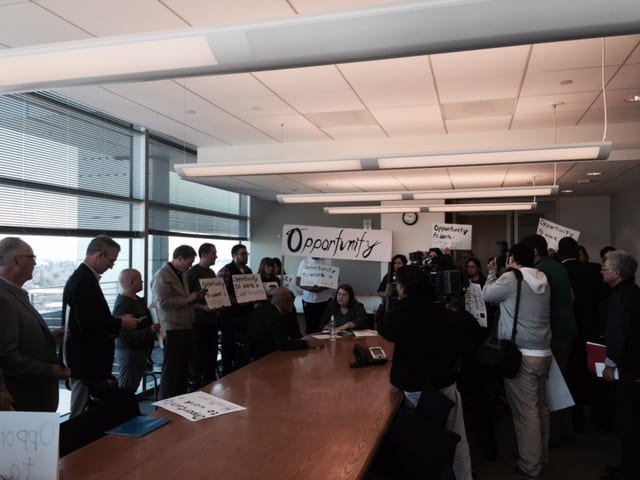 The purpose of the initiative is to require employers to offer qualified part-time employees the opportunity to work additional hours before hiring new part-time or temporary employees.

The Problem: Too Much Part-Time Work

Currently one way (of so many ways) employers nationwide take advantage of their workforce is by limiting the hours they can work in order to avoid providing any benefits that might accrue to full-time employees. Instead of upgrading employees to full-time status when they need more work done, they hire additional part-time or temporary workers. The result is that people have to take on multiple jobs just to (barely) get by. The "Opportunity to Work Initiative" is the first such initiative in the country to limit this abusive practice by requiring employers to expand the hours of their current workforce before hiring new people.

Ben Field, Executive Officer of the South Bay AFL-CIO Labor Council said at the event, "A number of employers avoid providing health care and other benefits by hiring new part-time workers instead of giving more hours to current part-time employees. It's unfair."

Poncho Guevara, Executive Director of Sacred Heart Community Service explained, "We are seeing so many parents working hard, willing to do whatever they can to support their families, but most part-time workers are unable to cover their most basic needs, such as food and rent. When part-time workers are denied hours, they are pushed further into poverty, making it impossible for them to support their families without the safety net we provide. They want to work. The ‘Opportunity to Work Initiative’ would help many of the families that we serve by giving them the chance to work more hours and hopefully achieve economic stability."

Fr. Jon Pedigo, Pastor of Our Lady of Guadalupe Parish and member of the Silicon Valley Rising coalition said, "Every day I see how my parishioners struggle to make ends meet because they do not have access to sufficient work hours. This initiative would help these workers support their families by getting enough hours so that their paychecks cover their bills and they can put food on the table."

Sara Delete, a fast food employee said, “Despite the fact that I work three part-time jobs, I struggle to make ends meet. Every week the number of hours I get changes, so I am never sure what my paycheck will be. Not having access to more work hours means that I am constantly worried about being able to provide for my son, cover my rent and pay the bills."

Chava Bustamante, Executive Director of Latinos United for a New America said, "The majority of individuals working part-time jobs are people of color. As such, they are disproportionately impacted by the lack of hours, low wages and non-existent benefits."

Even though many Silicon Valley companies make enormous profits one in three Silicon Valley households don't make enough money to even meet their most basic needs. 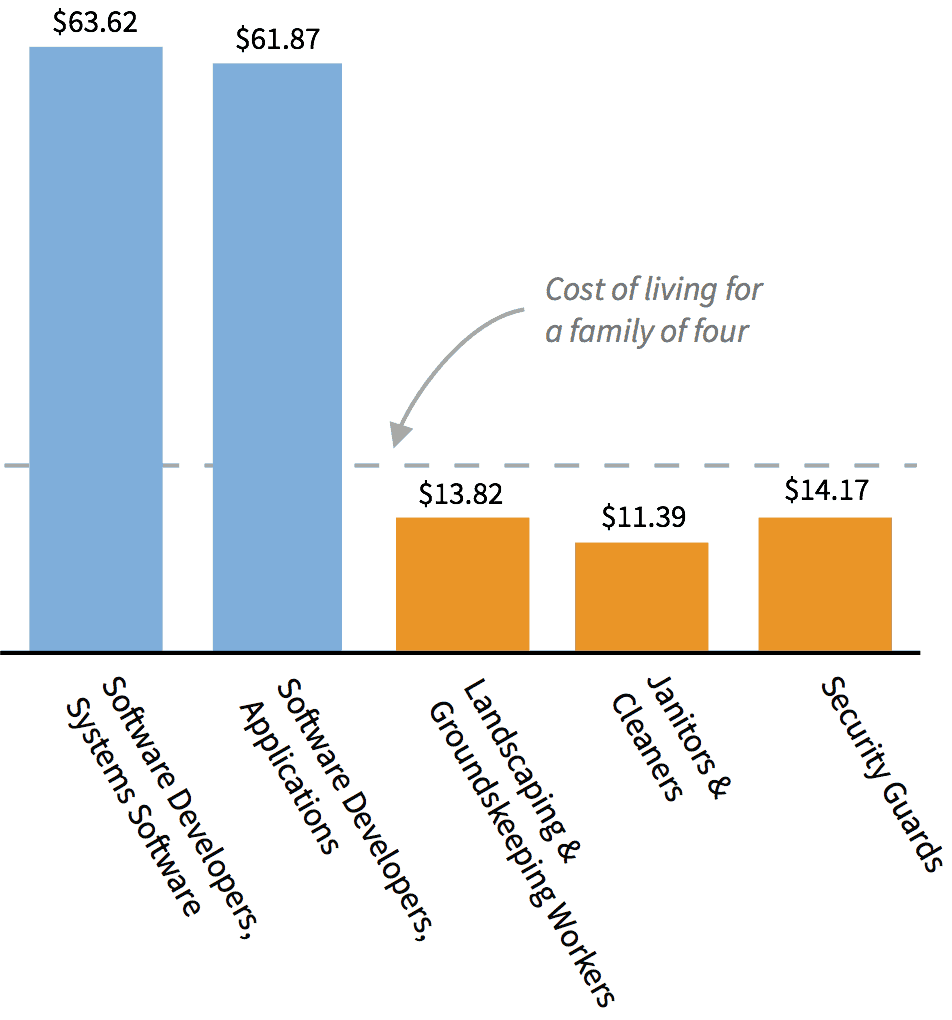 Companies everywhere use all kinds of schemes to keep "labor costs" low. One way the wages of lower-skilled workers are kept low is through maintaining intentionally high un- and under-employment levels. Public investment in infrastructure and other job-creating areas is reduced, limiting job availability. Teachers, police, health care, child care and other employees and services are cut back. The result is a surplus "reserve army" of hungry people who can be exploited and set against each other in competition for any private-sector jobs that do exist.

In Silicon Valley there is particular demand for workers skilled in such fields as engineering and programming, so tech employers engage in various schemes to keep tech-specialist pay lower than it should be. One scheme is the use of H1-B visas for bringing in workers from other countries. Higher-paid and older American-born tech workers are laid off or their pay is reduced as these workers are brought in at lower pay rates.

Sometimes the tech companies engage in more direct wage suppression. A number of Silicon Valley companies were caught engaging in a conspiracy that worked in a way similar to price-fixing, except it was pay-fixing. The companies made private, illegal deals between each other to limit the pay of their employees by agreeing not to recruit or hire people already at one of the other companies. This kept down competition for these employees, which limited their pay.

Of course the higher-skilled tech workers are not left in poverty and/or struggling to get by, as the (often people of color) lower-skilled workers are. But it is part of the same "rigged" system where the government, "captured" by wealthy interests, not only does not step in with investment that would correct abuses, it is forced to cut back on spending on the very things – such as antidiscrimination, antitrust and other enforcement – that would make a difference in wages, as well as public services to help people affected by the resulting inequality.

The "Google Bus" Effect Of Tax-Dodging On Communities

The use of these and other schemes drive up profits, which the companies then move out of the country to tax havens using various schemes. This defunds government's ability to provide regulatory enforcement, badly needed public services, and other things that would help fight the inequality that is hurting so many people.

One example of the effect of this government defunding is Silicon Valley's poor transportation system. There is minimal investment in public transportation options. The rail, road and other infrastructure is poorly maintained and overwhelmed. Meanwhile the wealthy tech companies provide their employees with a private transportation system. Modern, usually white buses known generically as "Google buses" (though companies like Facebook, Genentech, Apple and others have their own fleets as well) take employees from home to work to areas with popular restaurants, etc. while the rest of the people are stuck in traffic jams, squeeze into already-filled trains on their limited routes or wait for the few public buses that operate.

Silicon Valley Rising's website states: "Silicon Valley Rising is taking on occupational segregation and severe income inequality with a comprehensive campaign to raise wages, create affordable housing and build a tech economy that works for everyone."

What is the purpose of our government and economy – to serve a few already-wealthy people and their corporations or to serve We the People? If passed, Silicon Valley Rising's "Opportunity to Work Initiative" would help hard-working families by helping providing the work hours they need to get by.

The initiative requires 20,000 signatures to make it onto the November ballot.