“The United States has two separate banking systems today – one serving the well-to-do and another exploiting everyone else.”
– Prof. Mehrsa Baradaran, author of "How the Other Half Banks."

We can continue to have a rigged system that enables and encourages predators to take advantage of the public, or we can offer public options that protect and provide services for the public.

The Campaign for Postal Banking, Campaign for America's Future and dozens of other national consumer, labor, and civic organizations on Wednesday delivered petitions signed by more than 150,000 Americans, asking the U.S. Postmaster General to implement postal banking. Postal banking would provide low-cost financial services through the nation’s 30,000 U.S. Post Offices.

"I’m here to call attention to all the groups you haven’t heard from today.

The idea of Postal Banking is so simple, so innovative -- that when people hear about it, they say Yes!!!. Why not?

Despite attempts in Congress to sabotage the Postal Service, Post Offices are still everywhere in America

... postal banking would be a god-send in communities where banks are leaving – and where “Payday loan” and “car title” loan predators suck the financial blood out of the working poor.

...the bankers, and the payday loan ripoff artists -- and the conservative enemies of the Postal Service had better get out of the way."

While every other developed country has postal banking to serve their people, America's rigged, Wall Street-dominated system gives great banking services to people with money but squat to those who do not. As a result of this rigged system, nearly 28 percent of U.S. households are forced to turn to payday lenders, check-cashers and other financial predators. They end up having to spend an average of 10 percent of their income on fees and services.

If this reminds people of the way the U.S. health care system only offers predatory insurance companies with no "public option," there's a reason. The U.S. Postal Service (USPS) could provide an affordable, high quality "public-option" alternative right now. But in our rigged system, it doesn't. Postal banking is a non-profit banking "public option" that would both serve Americans who need this service – and help preserve the USPS at a time when it is under attack by the same privatizers who have rigged the rest of our system against us.

It would be simple for the USPS to set up Postal Banking. The USPS offered savings deposit accounts until 1967. It still offers money orders and international wire transfers. They have the authority to expand this. Adding savings accounts, bill paying, ATM services and other services would be easy. And this is why Wall Street is fighting to keep it from doing so.

A May 15 report from the USPS Inspector General David Williams said, “Offering expanded financial services would help the Postal Service improve the lives of millions of Americans as it fulfills its universal service obligation.”

"The sad part is that the people who go to loan stores can't get a loan from the bank because, they either have bad or no credit to get approved. The loan stores take advantage of this and make a bad situation worse. It is completely unethical and a sad picture of the way humanity is on a downward spiral." - Heather, WI

"I am caught in the payday loans cycle... I cannot afford to pay them off so I have to continue borrowing month after month and it is draining me." - Toni, KS 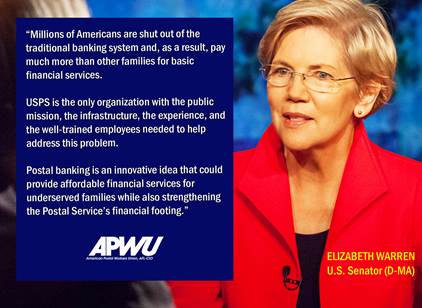 This Postal Banking Petition Is Important

A “Grand Alliance” To Save Our Public Postal Service

Why We Need Postal Banking: Statements from Leaders