Put This Coal Kingpin in the Stocks

Disgraced coal baron Don Blankenship didn’t get what he deserves in his recent federal trial. But he richly deserves what he got.

“Guilty,” declared all 12 West Virginia jurors, who convicted this arrogant and avaricious former CEO of Massey Energy of willfully conspiring to violate America’s mine safety laws. As a result of that conspiracy, 29 miners were essentially murdered by the corporation in a horrific explosion deep inside Massey’s Upper Big Branch coal mine back in 2010.

Blankenship — a multimillionaire right-wing ideologue, union-buster, and political heavyweight — ran the doomed mine as a lawless operation. This kingpin of King Coal relentlessly put profit over people, recklessly endangering miners. He made Upper Big Branch one of the most dangerous workplaces in the country. 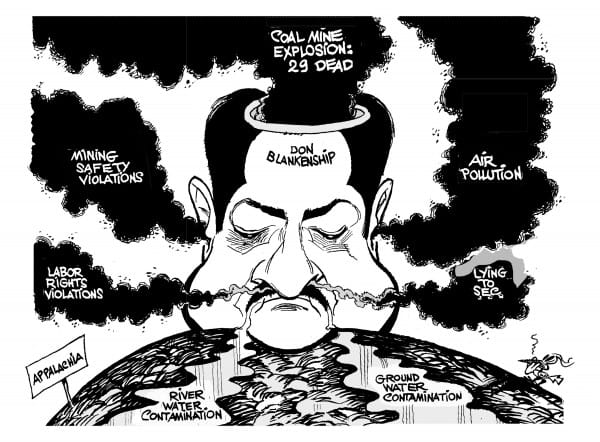 Powered by Pollution, an OtherWords cartoon by Khalil Bendib

But coal is indeed king in West Virginia, where the royals can count on being coddled. Thus, Blankenship faces a maximum of just one year in prison. And his diamond-studded legal team intends to have the jury’s unanimous verdict tossed down the dark shaft of judicial favoritism for the rich.

What the mining baron deserved was to be put in stocks and subjected to a steady stream of derision from the families of mineworkers who were hurt, sickened, and even killed to haul up coal so Blankenship could live in luxury.

He escaped that justice, but he’ll never shake off the guilty judgment of the jurors. The month-long, widely covered trial fully documented the rank immorality of this man and his ill-gotten fortune.

Blankenship undoubtedly thinks he got away with murder. But in the court of public opinion, he’s turned his name into a four-letter word.