Airline Workers Win Big In Union Vote -- In The South!

Airlines have been notoriously following the typical American capitalist business model of (literally) squeezing the customer into smaller and more uncomfortable seats, literally starving their customers, extorting cash for a bit more comfort on long trips, charging more for less – and then, to top things off, adding hidden fees. They notoriously have also been squeezing their employees, downgrading working conditions, demanding givebacks and fighting unionization.

The squeeze on employees is finally turning around. Passenger service agents at American Airlines on Tuesday voted to be represented by a union. The vote was described as "overwhelming," with 86 percent voting in favor. Politico called this a historic win." According to the Communications Workers of America (CWA) this is “the largest labor organizing victory in the South in decades.”

This unionization effort has been going on for nearly 20 years. Votes have been blocked by court battles, restructurings, anti-union propaganda pushes, and the rest of the tricks big companies have been using. Two years ago, following these anti-union efforts, CWA lost a vote of 6,000 workers by only 150 votes. But this time, following the restructuring of American Airlines and the merger with US Airways, the profitability of the airline and with a revived National Labor Relations Board making sure the election was fair, the effort by American Airlines agents to become unionized received an overwhelming 86 percent.

The organizing effort was focused on American's hub at the Dallas/Fort Worth airport and in Florida. Three-fourth of the American/US Airways agents work in Texas, North Carolina, Florida or Arizona. Larry Cohen, president of CWA, said, “This is a big deal because this is the South.”

AFL-CIO President Richard Trumka said this vote proves that the “future of the U.S. labor movement is alive.”

“It should not be lost on the pundits that most of the nearly 14,500 new union members work in Southern states. The right to a voice at work doesn’t have a geographic predisposition, and this victory will energize ongoing organizing efforts in the South.”

"Gone are the days that management can take what want when they want."

Carroll Locklear, a Texas reservation agent, said in a statement released by the CWA that she had been “praying for this day” in her 18 years with American Airlines.

“We have been the odd employees out for so long, because we were the only employees without union representation,” she said. “Gone are the days that management can take what they want when they want. This will be a win-win for all of us.”

This matters. The only way regular, working people can fight back when those with enormous accumulated wealth and power want to take from them – us – is to organize together into unions. This chart from the report, "Inequality: A Broad Middle Class Requires Empowering Workers," says it all: 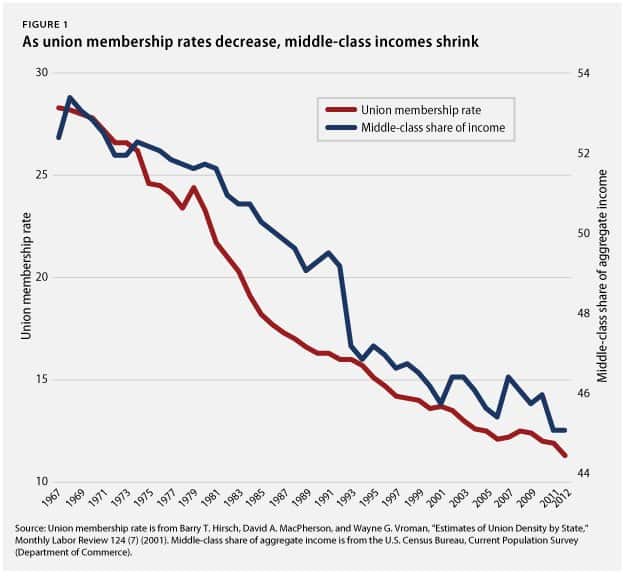