On Labor Day, families gather, politicians pay tribute to values of hard work, and some workers even get an extra day off. But this Labor Day arrives with working families struggling to stay afloat.

Working family incomes haven’t gone up in the 21st century. Inequality reaches new extremes. Corporate profits are reaping a record portion of the nation’s income, while worker wages wallow at record lows. Three-fourths of Americans fear their children will fare less well than they have.

This Labor Day, we should do more than celebrate workers – we should understand how vital reviving worker unions is to rebuilding a broad middle class.

The raging debate on inequality and its remedies often omits discussion of unions. Inequality is blamed on globalization and technology that have transformed our workforce. Remedies focus on better education and more training, with liberals supporting fair taxes to help pay the cost.

But this leaves power and politics out of the equation. Americans are better educated than ever, with high school and college graduation rates at record levels. Technological change was as rapid when America was building the middle class as it is now. Globalization isn’t an act of nature; it is a set of trade, tax and corporate policies that benefit some and injure others. Our extreme inequality and our sinking middle class are the product of political choices and political power.

And central to this reality: the rise and the fall of worker power in the form of unions able to bargain collectively at the workplace and mobilize worker power in the political arena. Trying to explain rising inequality without talking about unions is like explaining why the train is late – the tracks are worn, the weather is bad – without noting that one of its engines has been sabotaged. 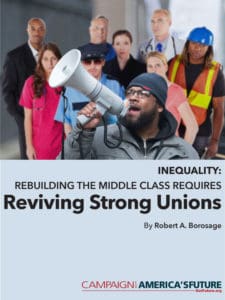 The facts are clear. Today, the Campaign for America’s Future releases a report – "Inequality: Rebuilding the Middle Class Requires Reviving Strong Unions" – that lays out the essential facts. In brief:

The decline of unions is indisputably at the center of America’s growing inequality and hallowed-out middle class. But what is also clear is that reviving shared prosperity and rebuilding the middle class isn’t likely to occur without reviving the ability of workers to organize and bargain collectively.

That’s true at the workplace. Over one-third of our jobs now are contingent – part-time, short-term, on-call. Workers cobble together different jobs to survive, but often don’t know what their hours will be. But no job is inherently marginal. Workers don’t lack education; they lack power. Where unions are strong – such as for maids, bellman, and porters in New York hotels – workers negotiate for regular hours, while gaining decent wages, health care and pensions.

And it's true for our politics. Most remedies for inequality include calls for progressive tax reform, for investment in education and training. The more insightful advocate balancing our trade and ending perverse incentives that reward CEOs for plundering their own companies. But none of these reforms is likely without a strong mobilization of workers – a strong union movement – to elect leaders and drive the debate. It isn’t an accident that corporations and the right have seen weakening unions as central to their political project.

Reviving unions will take new forms of organizing, new alliances, new thinking. In Los Angeles, for example, an active union movement – built significantly in immigrant communities — helped elect officials who then used government procurement and zoning powers to demand that companies pay decent wages, adhere to labor standards, and end sabotage of worker organizing. In the fast-food walkouts of this summer, new alliances with religious and community groups, support by elected officials such as members of the Congressional Progressive Caucus, provided both protection for the workers and began to enlist consumer support for better wages.

Government policy helped to build strong unions; government policy helped to undermine them. Winning the necessary reforms against the entrenched big money politics of our time won’t be easy. But the first step is for progressives to be clear: At the center of any agenda to rebuild the middle class must be a commitment to empowering workers to organize and bargain collectively, to rebuild a strong worker voice both in the workplace and in our politics.