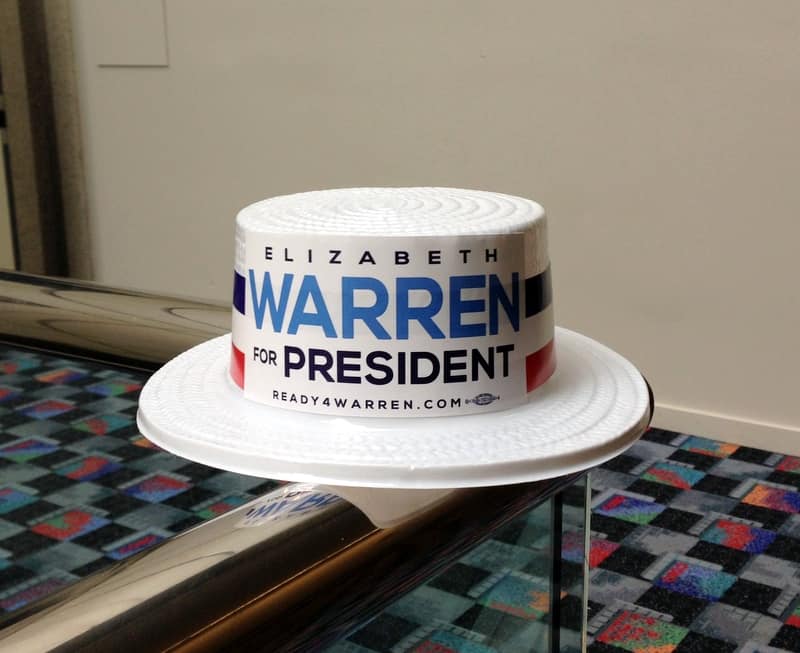 Senator Elizabeth Warren took her fight against a rigged system to the Netroots Nation gathering in Detroit Friday morning, saying that she is fighting back, and if We the People "push back and fight hard, we can win."

Fighting back against a rigged system was the theme of Warren's rousing speech to Netroots. She began by briefly telling the story of how the about Consumer Financial Protection Bureau (CFPB) came to be. She had the idea for the agency, started talking about it, people told her it was a great idea and badly needed, but said to her, "Don't do it because the biggest banks in the country will hate it and you will lose."

She said they had that half right. "They spent more than a million dollars a day for more than a year lobbying against financial reforms. But we fought back and we won. We won because you and a zillion other people across the country got in the fight. We said we the people will have this agency and we won."

And now we have the CFPB and it has already returned $5 billion to people that the big financial firms tried to steal, she said.

Warren's message was that we should "never miss the central point of this story. The CFPB is proof of how democracy can work in the 21st century. It is proof that if we push back against the biggest, strongest, most ruthless lobbying effort in the country, if we push back and fight hard we can win. We can't win every time and we are still trying to figure out how to make it all work. We don’t win every time but we’re learning to win. We will keep at it; we will fight and we will win that’s my message today."

Warren moved from there to what is happening in the country today. She said companies naturally look for profits. "But many of them have another plan – they use their money and their connections to try to capture Washington and rig the rules in their favor ... That’s what we’re up against that’s what democracy is up against."

She compared what happens to regular people with what happens to wealthy elites at the top, saying, "A kid gets caught with a few ounces of pot and goes to jail but a big bank launders drug money and no one gets arrested."

Warren said, "But it's not just the big banks." She called on the audience to look at the choices the federal government makes, such as piling debt on students. Then she went straight after Republicans as the enablers of the rigging and corruption. "Instead of building a future, this country is bleeding tax loopholes. Billion-dollar corporations squeeze out deals with foreign countries, renounce their citizenship and pay no taxes. How does this happen? They all have lobbyists and Republican friends in Congress to protect every loophole and every privilege. The game is rigged and it isn’t right."

"Take a look at what happens with trade deals. Trade negotiations are like Christmas morning for the biggest corporations," she said.

"Stop and ask yourself, why are trade negotiations secret? I have had people involved in the process actually tell me, If people knew what was going on they would be opposed. My view is if people would be opposed then we shouldn’t have those trade deals."

Warren said the tilt in the playing field is everywhere. "When conservatives talk about opportunity, they mean opportunity for the rich to get richer and the powerful to get more powerful. They don’t mean do something about student loan debt or help someone unemployed to get back on their feet."

"Deep down, this is a fight over values. Conservatives and their powerful friends will continue to be guided by their internal motto 'I got mine and the rest are on your own.' "

"My motto we all do better when we work together and invest in future. The country gets stronger when we invest in helping people succeed. ... These are progressive values and these are the values we are willing to fight for."

She then went into a refrain:

We believe that Wall Street needs stronger rules and tougher enforcement.
And we're willing to fight for it.

We believe in science and that means that we have a responsibility to protect the planet.
And we will fight for it.

We believe the Internet shouldn't be rigged to benefit big corporations.
And we will fight for it.

We believe no one should work full time and still live in poverty. That means raising the minimum wage.
And we will fight for it.

We believe that fast-food workers deserve a livable wage.
That means we will fight alongside them.

We believe students are entitled to get a good education without being crushed by debt.
And we will fight for it.

We believe after a lifetime of work people are entitled to retire with dignity. That means protect Social Security and Medicare.
And we will fight for it.

We believe equal means equal and that true in the workplace and at home and everywhere.
And we will fight for it.

We believe immigration has made country strong and vibrant.
And we will fight for it.

And we believe that corporations are not people. (The crowd was on its feet making a lot of noise so I don't know what she said next.)
And we will fight for it.

And the crowd went nuts.