What Does Hillary Believe? Populists Want to Know. 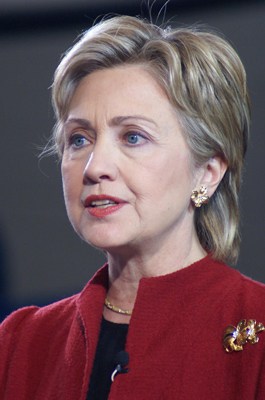 There's a vibrant debate underway that could shape the future of our economy and our society. The New Populism promises to re-energize the political conversation and could potentially restore the Democratic Party's fortunes as well. But the Democratic Party is at risk of being sidelined from the debate, paralyzed by the Sphinx-like silence of its presumptive 2016 nominee.

In Hillary Clinton's absence, Bill - her husband, frequent proxy and former head of the party - appears to be waging a rhetorical war on populism. If she doesn't share his anti-populist opinions, now would be a good time to say so.

Is "anti-populist" a fair description of Bill Clinton's position? This week alone offered ample evidence. Exhibit A is the former president's by-now perennial appearance at conservative billionaire Pete Peterson's "Fiscal Summit," a propaganda event designed to convince a poverty-ridden, wage-stagnated and unemployment-stricken nation that its most urgent priority is convincing the government to do even less about these crises.

And let's not forget the other elements of the "fiscal summit" plan: cutting Social Security and Medicare for the middle class while at the same time lowering taxes for the wealthy. That's anti-populism in a nutshell right there.

I've covered these dismal "summits" before1 and it's a depressing task. This year I'll outsource the task to the worthy Alec MacGillis at The New Republic, who writes that these events "are riddled with moments of elision, hypocrisy or outright dishonesty that are allowed to pass unchallenged by complaisant moderators."2

Although Clinton was the day's big draw, the "Summit" website indicated that only 173 people were watching his remarks online. That's not hard to understand. Viewing one of these events is not unlike watching an over-the-hill oldies band rheumatically sleepwalk its way through "Stairway to Heaven" and "Barracuda" for the thousandth time to a hotel bar filled with drunken business travelers. The songs have lost whatever meaning they once had for the listeners, and from the sound of it the band feels the same way.

But the rich guy's paying so they keep on playing.

Clinton dutifully pitched terrible ideas like a "repatriation" tax cut for offshore corporate profits, saying "we have to unlock this money" somehow. (Since corporate profits are at record levels, and the actual taxes collected for those corporations are quite low, a better way to unlock the money would be to close some corporate loopholes.)

He pitched other anti-populist ideas, too, especially where Wall Street's concerned. "Getting rid of Glass­-Steagall didn't have anything to do with the crash," he said. "Nobody has identified a single bank that failed because of the repeal of Glass/Steagall. Not one. Lehman Brothers was an investment bank and Bear Stearns was an investment bank."

This is disingenuous in the extreme. It's true that no Too Big to Fail banks went down during the 2008 crisis. But that's because the federal government rescued them, at great cost and within an enormous distortionary effect on the economy. Why did the government do that? Because they were too big to fail!

The too-big-to-fail problem was exacerbated by the Clinton administration's own actions, especially in creating Citigroup (where a number of Clinton and then Obama officials then enriched themselves). Worse, the banking bill that Clinton signed left the vault doors open for a decade of unregulated fraud and mismanagement - which he argues could not have been predicted, but which a number of people did predict at the time.

Then there was the anecdote about President Clinton that Tim Geithner told earlier this week, where he says he asked the former president how he might "pursue a more populist strategy."

"You could take Lloyd Blankfein into a dark alley," Clinton said, "and slit his throat, and it would satisfy them for about two days. Then the blood lust would rise again."

We address this troubling anecdote at length here, but it seems clear that President Clinton is characterizing populism - and the majority's will - as violent, irrational, and insatiable. It's reasonable to ask whether that viewpoint is shared by the Democratic Party's presumptive presidential nominee.

President Clinton also addressed income inequality this week. Discussing the fact that it worsened while he was president, he said:

"You can say, 'Well, inequality has still increased,' because the top 1 percent did better, but I don't think there's much you could do about that unless you want to start jailing people."

It is hard to know whether the former president is being disingenuous, or whether he is genuinely unaware of the enormous bodies of economic research which outline precisely what can be done about inequality - and how important it is to address the problem before it is too late.

The remark about "jailing people,"3 especially coming on the heels of the Geithner quote, suggests that Bill Clinton sees a Manichaean divide between the interests of the struggling many and the interests of the privileged few. He characterizes the economic needs and wishes of the majority as harsh, vengeful, and irrational.

These comments suggest that Bill Clinton perceives a state of war between two classes - and that he's chosen his side.

Out of the Closet

The simple answer to the question "How do we address inequality?" is, as Bill Clinton should know, "by undoing the policy choices which accelerated it." Some of those choices - whether in deregulation, taxation, or other policy areas - were made during the Clinton administration. (Others came later, like the Bush tax cuts and the Obama administration's refusal to criminally prosecute bankers.)

In a more reasonable moment, Clinton suggested treating financial derivatives the way we used to handle agricultural derivatives, by restricting their purchase to people whose interests are directly affected. That would limit systemic risk and would make them a form of insurance. (Clinton did not suggest that they be subject to the same kind of oversight and reserving requirements as insurance, which would also be necessary.)

But such moments were few and far between. The real agenda seemed to be defending his record and paving the way for Hillary's candidacy, while at the same time gently pushing his pro-wealth agenda.

"Everybody acts like I sat in a closet and said, 'What can I do for Wall Street today?'" Clinton complained. But nobody thought he acted in a closet. His administration's pro-Wall Street moves were made in public, in plain sight. In the go-go nineties, a lot of people even thought they might work. Today we know better - or should.

The populist view of President Clinton doesn't need to be as black-and-white or as harsh as the view he seems to have of populism. He is emotionally complex, like any of us. It's possible to sincerely believe that what is in your own best interest and that of the people around you is also best for the country.

That seems to be what Bill Clinton believes.

What about Hillary? As Bill fulminates and opines, she remains silent on the urgent economic issues of the day.

It is certainly easy to understand why a potential candidate would prefer that approach. Obama's winning 2008 strategy was to become a blank slate on which every voter could project their dreams and wishes. It's the candidate as hologram: what you see depends on where you stand.

But that's not good for the country. It stifles debate and encourages the politics of personality at the expense of substance.

The Democratic activists who encourage this silence are harming their own interests. How can the Democratic Party continue to hold itself out as "the party of ideas" if it doesn't even know what its presumptive candidate's ideas are?

Other party activists have argued that the presidency is overemphasized in politics, and that it's premature to focus on 2016. While there is some merit to this position, in this case I disagree. The Clintons cast a long shadow, and the assumptions now in place about what Hillary will do in 2016 are dominating - and at times, stifling - the political discourse today.

While Hillary remains silent, some supporters say it's unfair or even sexist to assume she shares her husband's views. And yet, many of the same people will also argue that she was an integral part of the Clinton administration (which is my belief as well), and that this is one of her greatest qualifications for the presidency.

You can't have it both ways. If Hillary and Bill were really a team - and if he's not speaking for her when he attacks populism - then it's up to her to say so.

Hillary Clinton may be able to dominate the political stage for some time, especially on the Democratic side of the aisle, without stating her positions on these and other critical issues. But it's not good for democracy - or the Democrats.

The silence could hurt her, too. As long as she says nothing, people will look to the words of her husband and partner. That could lead to unflattering interpretations of other events from her past - like the campaign cash senatorial candidate Hillary Clinton received from the financial industry, the bank-friendly bankruptcy bill that she voted for, and the large amounts of money she's received for speaking at Wall Street.

The Campaign for America's Future is hosting a conference May 22on the New Populism. Sen. Bernie Sanders, the independent from Vermont will be there. He's already indicated an interest in running for president, and he's strongly committed to the populist agenda. Sen. Elizabeth Warren, the new populist hero whom many people hope will also run, will be there, too.

As the PopulistMajority.org polling website shows, populist policies and messages are very popular with the American people. Individual Democrats have taken up the populist line with great effect in city elections. Populism could be the key to a Democratic resurgence - but not if the party keeps itself in a holding pattern, waiting for a candidate who won't make her position known, but whose closest and most powerful spokesperson is mounting an all-out campaign against populism.

If Hillary Clinton intends to play an ongoing part in national politics, whether as a presidential candidate or in another role, she should tell us where she stands on these issues. If she's retiring from political life, she should say so and let other leaders step up. Either way, it's time for the debate to begin.

What does Hillary Clinton believe? The public deserves to know. It might even be in her best interests to tell them.

1Re-reading my coverage of the "Summit" from two years ago it struck me: Wow, I was pretty ticked off about it that year. But then, the monotony hadn't set in yet.

2About those "complaisant moderators" at the Fiscal Summit: Is it any wonder when journalists like Lori Montgomery, who are presumably treated quite well for moderating an event in which reality is not permitted to intrude, then go back to their desks and issue frustratingly misleading reports about government deficits or entitlement programs? See these 39 links from the Center for Economic and Policy Research for more.

3That's not to say that jailing bankers who have committed fraud wouldn't have economic, as well as moral, value. It would - by serving justice and discouraging the behavior that could lead to another financial crisis. But that only addresses a portion of the inequality problem, so in this context Clinton's comment reads like an attempt at misdirecting the audience.