How's your job going – if you even have one? The odds are very, very high that you haven't seen a raise in a long time. Or maybe you were laid off and found a new job at half your old pay. They say this is the "new normal."

The AFL-CIO has released this year's 2014 Executive PayWatch at www.PayWatch.org, a "comprehensive searchable online database tracking the excessive pay of CEOs of the nation’s largest companies."

PayWatch.org offers workers the unique ability to compare their own pay to the pay of top executives. According to Executive PayWatch data, U.S. CEOs pocketed, on average, $11.7 million in 2013, compared to the average worker who earned $35,293. That means CEOs were paid 331 times that of the average worker. (CEO pay was 774 times the minimum wage.)

In The New York Times Tuesday Joe Nocera writes, in "C.E.O. Pay Goes Up, Up and Away!" that,

When the market fell after the financial crisis, many companies gave their chief executives big option grants to “make up for” what they’d lost. When performance measures were toughened, chief executives responded by demanding larger grants because they were taking more “risk.”

It’s a rigged game. When the company’s stock goes up, says Crystal, the chief executive views himself as a hero. And when it goes down, “it’s Janet Yellen’s or Barack Obama’s fault.”

Along with comprehensive data on CEO pay at many companies, PayWatch.org is focusing on Walmart, Kellogg’s, Reynolds, Darden Restaurants and T-Mobile and providing the stories of real people working at these companies. The post PayWatch: CEO Pay Hits ‘Insane Level’ at the AFL-CIO Now blog explains,

In 2013 Walmart CEO Michael T. Duke received $20,693,545 in total compensation. PayWatch points out that a minimum wage worker at Walmart would have had to work 1,372 hours just to earn what Duke made in an hour. Tiffany, a Walmart worker and mother of two in Maryland, said:

I earned about $12,000 last year as a full-time employee. These poverty wages force my family to receive public assistance. Currently, we are enrolled in the public health care program for low-income families, and the Women, Infants and Children program for my infant daughter.

Check out the CEO-to-Worker Pay ratio in your state. 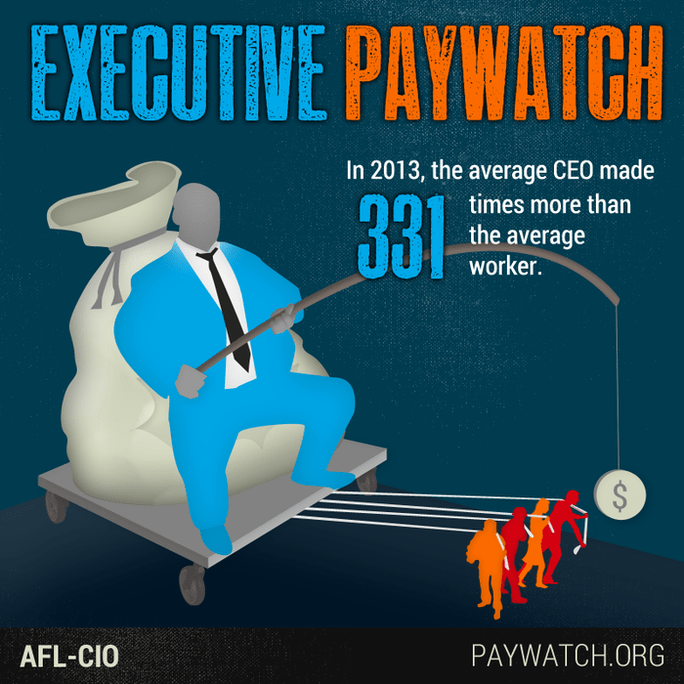 Click here to tell Congress to "raise the wage!"

Minimum wage workers are not just teenagers bagging groceries at the corner store. They're not all go-getters on the first rung of the ladder to the American dream. They are mostly women, disproportionately of color and in service industries where there's no way up or out.

They're the men and women who hand you your change, clear off your tray and say “have a nice day” on your way out the door.

They haven't had a raise in years. In fact, their pay has gone down because it's not indexed to inflation.

Join The Nation and Campaign for America's Future in calling on Congress to pass the Fair Minimum Wage Act.

Also Campaign for America’s Future has set up a special phone number – (661) BOEHNER – that will connect you directly to House Speaker John Boehner, so you can demand he allow a vote on the Senate bill to restore unemployment benefits for the long-term jobless.