Boehner Says He's Out Of Ideas To Prevent a Shutdown. Here's One. 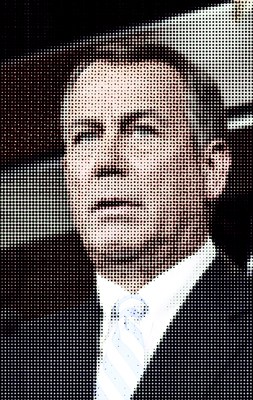 Yesterday the House leadership scrapped plans to vote on a bill to keep the government open. It was a conservative plan that would essentially maintain the sequester cuts. But it didn't tie Senate passage to the defunding of ObamaCare, so Tea Party Republicans were prepared to join with Democrats and defeat the bill.

As with Boehner's attempts get his caucus unified around a fiscal cliff compromise and approve transportation and housing cuts, the far right balked, exposing Boehner's lack of leverage. He can't negotiate with Democrats on behalf of the Republican Caucus because he can't promise his caucus will support any final deal.

Asked by a Hill reporter about his plan for the debt ceiling, Speaker John Boehner (R-Ohio) chuckled and said: "Why don't you give me one so they can shoot it down too?"

Here's an idea, Mr. Speaker. One they can't shoot down.

2. Enter into budget negotiations with the White House and Senate alongside Minority Leader Nancy Pelosi.

3. Agree to put a final deal on the floor the House regardless of how many Republicans support it.

4. Seek to win passage with predominantly Democratic votes and a minority of Republican votes.

Anyone with basic math skills can see this is the only way a final compromise will ever pass. It's just a question of how much kabuki theater you think is necessary to perform before we get there.

You seem committed to dancing for a long as possible, prove you've fought the good fight before the eventual cave, and hope that wards off any possible coup attempt.

But rumors are circulating that you don't even plan to continue suffering these indignities and stay on as Speaker after 2014.

So what, you may say. I still want to go out on my terms, not forced out next week. Fair enough.

Then we proceed to:

5. Work out a deal with Pelosi for Democrats to help keep you as speaker through 2014 if the Tea Party tries a coup.

If that helps seal the deal for immigration reform too, and maybe even makes jobs legislation plausible again, surely Democrats would oblige.

The path you're on now, you will be remembered as a feckless Speaker who barely kept the government open with duct tape.

The path I'm proposing, you will be remembered as a courageous Speaker with a significant legislative legacy who did what was right for the sake of the nation.

You are not beholden to a few dozen nutjobs. You have a choice.