The Free-Trade Job-Loss Express Is Coming Straight At Us 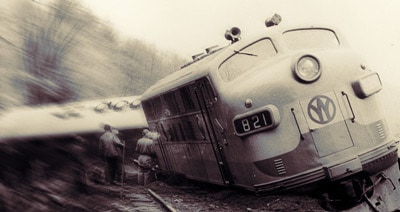 The giant multinationals are pushing a trade deal that will literally let them bypass our laws. This deal is called the Trans-Pacific Partnership (TPP) and it is coming at us in the next few months. The corporations are trying to switch this gravy-train onto the "Fast Track." For them this deal is the light at the end of the tunnel of democracy and self-government that has been trying to reign them in. We need to get this runaway train back on the rails or We the People will be begging for scraps thrown from the caboose. Call your Senators and Representative today and let them know that people are paying attention and oppose "Fast Track trade authority."

President Obama's US Trade Representative (USTR) and lobbyists for the giant multinationals are asking Congress to yield its Constitutionally-mandated obligation to carefully review and amend the upcoming Trans-Pacific Partnership (TPP) trade agreement. They want Congress to give the administration "Fast Track" "trade-promotion" authority (TPA) so they can get the deal done ASAP. ASAP in this case means literally in the next few months.

Politico has the story inside their story USTR headed to Japan to attack auto trade barriers,

[The US trade representative's] trip comes as the Obama administration hustles to make a major trade deal with Japan and 10 other Pacific Rim countries happen by the end of this year.

... The Obama administration needs Congress to approve “fast-track” authority guaranteeing that TPP would get a vote without amendments .... The administration has a short window of opportunity before campaigning revs up for the 2014 election, making it a near-impossible environment to get such a massive trade deal done.

Giant Multinational Corporations Hope To Push This Through

If TPP passes it will override American law. Again: we will not be able to pass laws that reign in the corporations. We will not be able to protect our jobs and wages because, as we have seen, companies can just close a factory and move your job to a country that pays very little, doesn't protect the environment, and doesn't let working people do anything about it. Of course the giant companies want these agreements -- they let them tell us that if we ask for decent wages or benefits they will fire us and move our job out of the country.

Right now because of trade agreements already in effect we are not allowed to make laws even putting information like "dolphin safe" on tuna can labels. El Salvador is being sued by a Canadian mining company for trying to require environmental permits, because of a similar trade agreement. This is what these trade agreements mean to our ability to reign in the giant corporations.

The giant, multinational corporations and their business groups are hopeful that they can push this through. The Financial Times explains, in
Obama’s ‘fast-track’ trade push faces congressional delays,

Corporate lobbyists, who have been pushing for a quick and uncontroversial approval of TPA [Fast Track], say they are still confident the talks will be successful.

“We are seeing signs of good support and momentum for TPA legislation in Congress and from the administration,” said David Thomas, vice-president for trade policy at the Business Roundtable, representing big blue-chip companies.

So here is what is coming -- soon. Lobbyists for the giant multinationals have been working behind the scenes to slip Fast Track through their friends in Congress. They will argue that the usual process Congress holding hearings, getting everyone's viewpoint and hearing everyone's concerns, then amending as needed and carefully considering the bill before a vote (also known as "representative democracy") will just get in the way of getting this done. They will want as much of this done behind the scenes because regular people will naturally be upset about our Congress handing over their authority like this.

If the multinationals get Fast Track pushed through there will still be a vote in Congress, but it will be rushed. That vote will occur after the corporate machine has cranked up a full-scale, mega-million-dollar PR push. It will become "conventional wisdom" among all of the "Serious People" that free-trade agreement "create jobs." People worried about the agreement's effect on jobs and wages, etc. will be marginalized, called Luddites and dirty hippies who are "against progress" and are "killing jobs" and all the things working people have been called as other "free trade" agreements have been pushed through.

From what we know about TPP (it is still secret, even though they want it passed within months) it looks to be more of the same.

The process for negotiating TPP has been rigged from the start. It has been negotiated in secret by corporate-interest with other stakeholders excluded. (Government employees involved move to high-paying corporate positions once the agreement is completed.) More than 600 representatives of corporate-interest groups have been "advising" while representatives of labor, human rights, civil justice, consumer, environmental and other stakeholder groups have been kept away from the negotiating table. Congress has also been kept out and has not yet seen the agreement. This is a rigged process that is designed to reach a conclusion in the interests of the giant corporations and not taking into account the interest of environmental, labor, human rights and other stakeholders who will be affected by the results.

Call Your Senators And Representative!

Call your member of Congress and both of your Senators and tell them not to yield Congress' authority to "Fast Track." Do this today.

We can not tolerate Fast Track after the way this agreement has been negotiated. Don't let Congress put itself in the position of no see, no amend, no time to think it through, all while a huge corporate PR campaign is underway. With Fast Track Congress will not be able to make changes and will have no time to think about the consequences.

Corporations are supposed to be subject to the laws that We, the People make. The current trade-agreement process is the other way around. It sets up a situation where democracy is a competitive disadvantage, because things like good wages and environmental laws are a "cost." It sets up a process of negotiations between corporate interests that sits above our laws, limiting what we can do about it. These trade agreements get democracy out of the way. "Fast Track" gets democracy out of the way so they can ram these agreements through. Don't let them get away with this.

See also TPP: The Coming Fast-Track Trade Outrage and all of the links to articles and posts at the end.