Apple Avoiding Billions And Billions Of Dollars In Taxes

Apple (like many giant, multinational corporations) has been avoiding paying the taxes they owe to the country by setting up foreign "subsidiaries" in tax-haven countries, and moving jobs and profit centers out of the country. They have accumulated billions upon billions of dollars in these tax havens. Now they want a special tax break to reward them for doing that.

Tomorrow the U.S. Senate Permanent Subcommittee on Investigations is scheduled to hold a hearing titled "Offshore Profit Shifting and the U.S. Tax Code - Part 2 (Apple, Inc.)" with Apple's Tim Cook. Apple is holding more than $100 billion in tax haven countries, to evade U.S. taxes. At the hearing, Cook (2011 compensation $378 million) is expected to offer a proposal for changes to the corporate tax system.

Cook's proposal is likely to be for a "tax repatriation holiday" and a "territorial tax system," both of which mean giant, multinational companies like Apple will pay less in taxes, people like Cook will have even more money, and We the People will end up with higher taxes, fewer good schools and good roads and police and teachers and the other things government does to make our lives better. As a bonus, this makes giant multinationals that move jobs and profits overseas even more competitive against smaller American companies that keep jobs and profits here and do not have foreign "subsidiaries" located in tax havens. 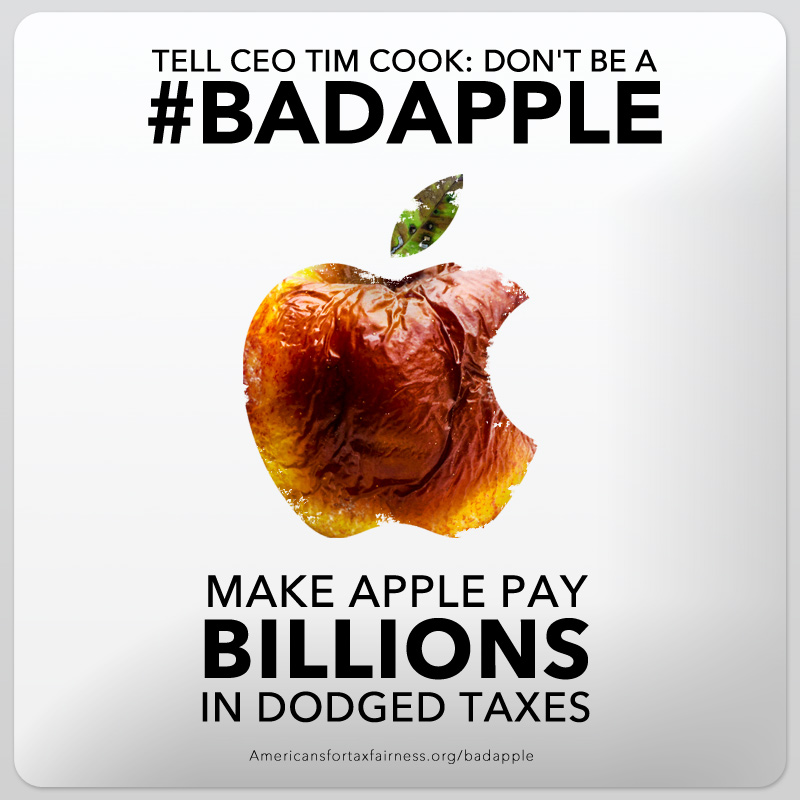 An analysis of Apple Inc.’s financial reports makes clear that Apple has paid almost no income taxes to any country on its $102 billion in offshore cash holdings. That means that this cash hoard reflects profits that were shifted, on paper, out of countries where the profits were actually earned into foreign tax havens.

How much is this costing us? First, with Washington all aflutter over deficits, the tax dollars: $35.3 billion. From the report:

Worse, however, is the cost in jobs and manufacturing infrastructure. The current tax laws encourage companies to move jobs, factories and profit centers out of the country. They actually subsidize this with tax breaks!

On the call were Bob McIntyre, Executive Director of CTJ, Damon Silvers, Policy Director and Special Counsel for AFL-CIO and Frank Clemente, Campaign Manager for ATF.

ATF's Frank Clemente said Apple is "acting like a back-alley thief trying to pick the pockets of American taxpayers." Clemente also said the proposal for a tax holiday is "another mugging of the American taxpayer."

CTJ's Bob McIntyre said that Apple has more than $102 billion accumulated offshore, "virtually all in tax havens, never taxed. Often profits made in the U.S. that they pretend to earn abroad." McIntyre said Apple is a "poster child for why we need to get rid of deferral," and "If they are doing business in real countries and paying taxes, give them a credit, but companies like Apple, it all ends up in a situation where they pay very little in taxes. Deferral has cost the U.S. taxpayers in Apple’s case $35 billion and is growing every year."

AFL-CIO's Damon Silvers described the terrible cost we pay for this, because it hurts smaller American-based businesses. Silvers spoke of the tax policies Apple seems likely to advocate in terms of the current "sequester" cuts, saying, "Today as Apple testifies we are dismantling vital government services, laying people off because we are in theory in a fiscal crisis. Head start, cancer research, national defense ... there is a long list of vital functions not being carried forward because in the view of Congress we don’t have revenues to support it."

"Apple is one of the most profitable corporations in America and perhaps the world, setting aside $102 billion, not paying tax. On a cash basis Apple only paid $3.3 billion in taxes worldwide, less than 10 percent. Walmart is paying 24 percent. But more damaging is what Apple is saying we should do with corporate taxes in general. Deferral lets companies with overseas subsidiaries avoid taxes. This is not something available to most companies, only to global corporations that can move profits and operation offshore."

"Small business is paying the full freight as are all of us as individuals. But Apple is asking for a special rate on offshore profits of 10 percent. And now key lobbyists, led by Fix the Debt, are proposing foreign overseas earnings tax free."

ATF has an extensive facts page at "Apple Is a Bad Apple when It Comes to Paying Its Taxes" and you can download the fact sheet by clicking here. You can tweet using the #BadApple hashtag.

CTJ has a page describing their new report, Apple Holds Billions of Dollars in Foreign Tax Havens and you can read a PDF of the full report by clicking here.

About CTJ and ATF

CTJ is a public interest research and advocacy organization focusing on federal, state and local tax policies. They push for tax fairness for middle and low-income families, requiring the wealthy to pay their fair share and closing corporate tax loopholes.

ATF is a coalition representing more than 280 groups. They are pushing for a tax system that makes the wealthy and big corporations pay their fair share of taxes.

FYI - ATF will be live blogging and live Tweeting from the Tuesday U.S. Senate hearing.