The corporate/conservative effort to gut the country's labor-law enforcement continues at full steam. Senate Republicans are blocking NLRB Board confirmations. Republican judges blocked the the National Labor Relations Board (NLRB) from operating until the Senate confirms Board members. Today House Republicans are moving on a bill to just shut the NLRB down.

Unions mean higher wages, benefits and safer working conditions for working people. This means "labor" -- i.e. you (unless you own a big company) -- gets a share of the benefits of our economy. This is because unions partially (only partially) balance the power difference between individuals and giant corporations.

One person against great wealth and power rarely stands a chance. That is why We, the People formed our government of, by and for the People. We, the People acting together (collectively) can used to be able to fight back against the concentrated power of great wealth.

Similarly, when individual people come up against the concentrated power of the giant corporations alone, they are at their mercy. One person saying, "Please, Sir, can I have a raise?" doesn't cut it. But dozens or hundreds or thousands of people acting together is collective power, which balances the equation to some degree. (Except when "trade" deals enable the giant companies to ship jobs our of the country, pitting low-wage, exploited workers against American workers, and say, "Shut up or we'll move your job out of the country, too.")

The right to form a union, bargain collectively and engage in legitimate union activities without fear of retaliation or intimidation is the law of the land, and Wall Street and the large corporations don't like it one bit. Not one bit at all.

NLRB And The Law

Take a look at Section 1 of the NLRA. In summary, it states that it is the position the position of We the People, (a.k.a. government,) that lack of bargaining power by workers against corporations leads to Depressions (we call them recessions now) -- the result of depressed purchasing power. And it leads to strikes, which disrupt commerce. Therefore, it is the policy of the United States to encourage collective bargaining.

The NLRA protects the rights of employees to:

Fighting labor-law enforcement so the big companies can act with impunity (and fighting for other restrictions on unions like "right-to-work" laws in the states) is about one thing and one thing only: driving down the wages and benefits that working people receive.

Trade agreements and weakening of labor laws has resulted in weakened unions. The result of weakened unions is explained in the post 40% Of Americans Now Make Less Than 1968 Minimum Wage, 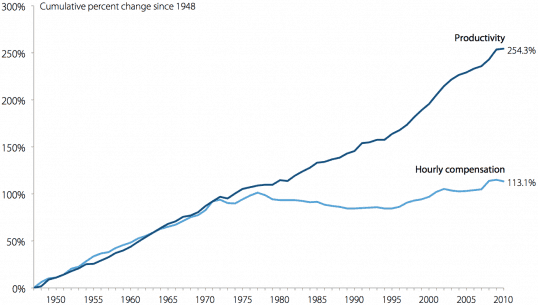 That is what happened when trade agreements broke the ability of unions to ask for a fair share of the proceeds. Businesses started moving jobs out of the country to low-wage, "business-friendly" non-democracies, and said to people who wanted raises "shut up or we'll move your job out of the country, too." This "decoupled" productivity increases from potential wage increases.

So the benefits of our economy started going to just a few people, instead of being spread around. The post, Is This Where The (Middle-Class) Money Went? tells that story: 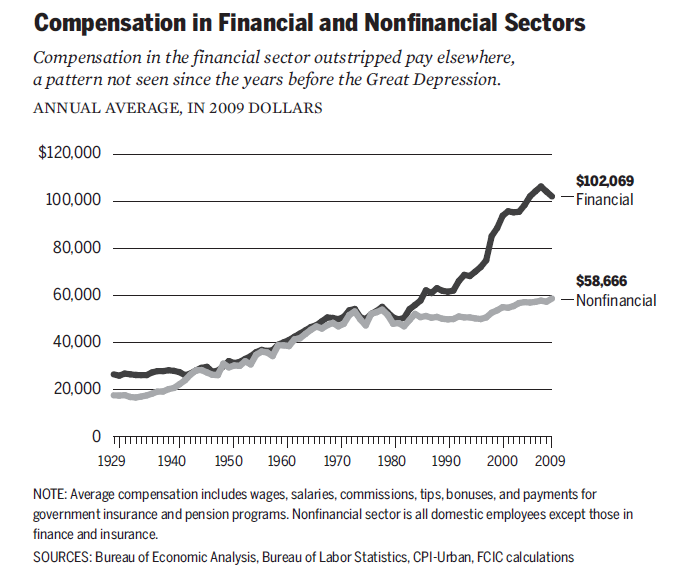 For two years, the board, which polices the labor laws governing unionized workers and unionization drives, has limped along with just two members, rather than its full complement of five, leaving many cases unresolved because of a 1-to-1 deadlock.

Today, in a 5-4 decision, the Supreme Court invalidated more than 500 cases decided by the National Labor Relations Board. For more than two years, the five person board only had two sitting members, due to Congressional obstruction of its nominees, and the Court decided that the two-person board did not have legal authority to issue rulings.

Republicans have been blocking confirmation of the President's nominees to government agencies, the courts, even keeping ambassadors from being confirmed. They are not objecting to the nominees themselves, they are trying to keep the government from operating as it is supposed to. Klein calls all of this this "loophole-driven minority obstruction." People are calling this "nullification." "Nullification" was the pre-Civil War "states rights" practice of Southern states simply ignoring federal laws. The Republicans are again engaging in nullification, on behalf of the 1%.

In particular, Republicans were blocking nominations to the new Consumer Financial Protection Bureau (CFPB) and the National Labor Relations Board (NLRB) in order to prevent these agencies from doing their job enforcing laws protecting people from scams and exploitation in exchange for a cut of the take from the scams and exploitation.

President Obama’s recess appointments to the National Labor Relations Board violated the Constitution, a federal court of appeals ruled today, also raising questions about Obama’s pick for head of the Consumer Financial Protection Board.

The court called the appointment of three members to the National Labor Relations Board in January 2012 “an unconstitutional act,” because it took place when the Senate was in an “intrasession” recess, rather than an “intersession” recess.

President Obama named three nominees to the National Labor Relations Board on Tuesday in an effort to fill out the five-member, bipartisan board that has become the center of a dispute over recess appointments.

... “With these nominations there will be five nominees to the NLRB, both Republicans and Democrats, awaiting Senate confirmation," Obama said in a statement. "I urge the Senate to confirm them swiftly so that this bipartisan board can continue its important work on behalf of the American people.”

The Republican-controlled House of Representatives is considering a bill that would stop the board from taking official action until either the Supreme Court rules on the D.C. Circuit's decision or the Senate confirms a quorum of the NLRB.

The status of the board has been in limbo since a three-judge panel of the D.C. Circuit Court of Appeals ruled unanimously in January that Obama exceeded his constitutional authority by appointing three of its members while lawmakers were on break in January 2012, thus bypassing the usual Senate confirmation process.

The House is expected to vote on legislation this week that would prohibit the board from issuing decisions until the fate of Obama’s so-called recess appointments is known.

So this battle continues. Republicans, working for the giant corporations, are trying to nullify US labor law in order to keep our wages and benefits down. They are filibustering nominees to the NLRB and their "judges" are acting in unison to keep the NLRB from operating. We are all living the results. Our economy is living the results. Will we let them succeed?
--