Today 21,000 of us went to Los Angeles City Hall to deliver a petition to the Mayor's office.  We didn't all go in person, but we were all there - on a petition. But the Mayor wasn't there, and nobody from his staff was available to meet with us either.

That's too bad, since somebody there cleary found time to meet with the millionaires, billionaires, and corporations behind "Fix the Debt," a PR campaign designed to cut Social Security and Medicare while lowering taxes for its patrons. Last week Mayor Antonio Villaraigosa lent his name and reputation to that effort, along with the prestige of the office he still holds.

I was honored to join a concerned Los Angeles citizen, Angela Garcia Combs, and to say a few words as she delivered the petition she started just a few days ago asking Mayor Villaraigosa  to resign from the "Fix the Debt" campaign.

"Fix" is a publicity stunt built around the idea that some of the nation's most powerful CEOs want to "educate" us about government debt - purely out of the goodness of their hearts, of course. It's only one face of a highly funded campaign designed to create a false panic about government deficits in order to promote its agenda of "entitlement" cuts and tax breaks for the wealthy. 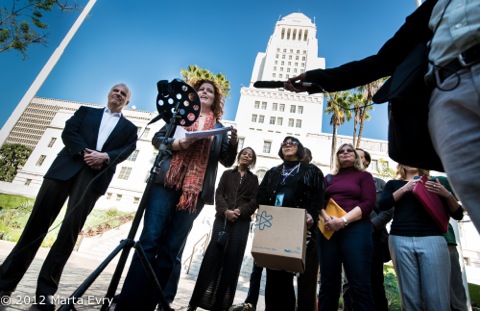 A reasonable person might ask why any group which claims to be concerned about deficit spending would try to lower tax rates for the most privileged among us, since that would make those deficits much worse.

Good question: It doesn't make sense - unless the real goal is tax breaks for the wealthy, not deficit reduction.

That is Fix the Debt's goal.  It's a traditionally far-right agenda, given a sheen of "objective" gloss through a highly-funded PR campaign (billionaire Pete Peterson's spent nearly a half-billion on it in the last four years alone.) A key element of their PR strategy is to appear "bipartisan" by recruiting big-name Democratic politicians to speak on their behalf.

In this case "bipartisan" means "buying people from both parties." 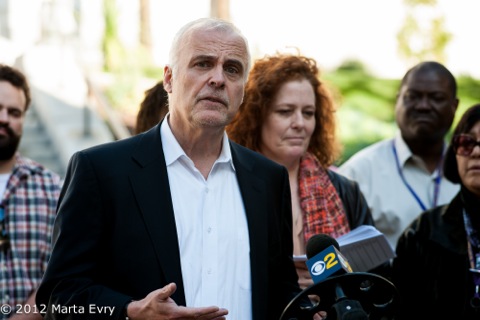 By lending his name to this campaign, Mayor Villaraigosa joins Democrats like former President Clinton, Erskine Bowles, and Pennsylvania Governor Ed Rendell. They've signed on to other incarnations of this billionaire/corporate campaign, while at the same time raking in millions on Wall Street.

Democrats should be publicly called out when they win office with public support, including that of core Democratic voters, then work against the public interest for personal gain once they leave.

These ex-officials aren't "nonpartisan" or "bipartisan." They're celebrity spokespeople for a product: less economic security for the rest of us, so the wealthy and corporations can pay less in taxes.

Is that Antonio Villaraigosa's career of choice too, as his mayoralty winds to a close?   We'd like to think our Mayor is better than that. Delivering the petition - to the Mayor's gracious and very professional receptionist

Should we worry about deficits? Sure, eventually. But screaming about Federal debt while there's widespread unemployment and wage stagnation is like worrying about water conservation while your house is on fire. First you put out the fire.

But as long as they're able to keep the country talking about deficits these CEOs and billionaires can distract us from the real causes of today's urgent problems, such as deregulation, criminality, and greed on Wall Street; increasing wealth inequity, which is causing permanent recession for the many and bloated wealth for the few; and perverse CEO compensation packages that reward short-term pumping-up of quarterly figures, not the growth of real businesses.

A reporter at the event asked if we weren't a "fringe" and "partisan" group. That's the party line spun by corporate America's flacks, and a lot of well-intentioned people have come to believe it.

But our position - no cuts to Medicare or Social Security benefits - is supported by vast majorities of Republicans, and even by majorities of self-identified Tea Party members. It's people like us who represent the truly "bipartisan" position, not the politicians who have signed on as Corporate/Billionaire America's celebrity sales force.

We were asked if we'd support any fixes to "entitlements." My answer was, Sure: Lift the payroll tax cap for Social Security, and strengthen its inadequate benefits. Attack the root causes of Medicare's cost problems, especially greed and excess profit in the health delivery system.  One good way to do that is by broadening Medicare and making it available to under-65s as well by allowing them to purchase Medicare coverage.

That's the so-called "public option." During the health reform debate they called that a "fringe" and "leftist" idea too - even though polls showed that most Republicans supported the idea. See how they work? That's the kind of scam these politicians are helping them sell.

The best way to fix deficits in the long term is by restraining these destructive forces and investing in jobs and growth. But that would cut into the personal gain of Fix the Debt's backers - so they're pushing anti-government hysteria instead, thanks to compliant corporate Dems in cahoots with rapacious Republicans.

The CEOs who have lent their names to "Fix the Debt" include many of the same bankers who ruined our economy in 2008: Lloyd Blankfein at Goldman Sachs. Jamie Dimon at JPMorgan Chase. Brian Moynihan at Bank of America. Jeffrey Immelt at GE and GE Capital.  If there's one thing they know how to do, it's sell people on toxic and worthless financial crap.

That makes them a perfect fit for "Fix the Debt," and for the anti-Social Security and anti-Medicare austerity its selling.  Deficit hysteria: It's this year's mortgage-backed securities.

Perhaps the Mayor and his staff didn't know who's really behind Fix the Debt. Maybe they weren't fully briefed on their real agenda. After his years of public service, it's hard to believe this is the cause to which he wants to lend his name and reputation.

As we said earlier, we're hoping he's better than that -- and that he'll prove it by resigning from Fix the Debt.

(The Los Angeles Times covered our City Hall visit here, and Marta Evry - who took these fine pictures - wrote about it here.)